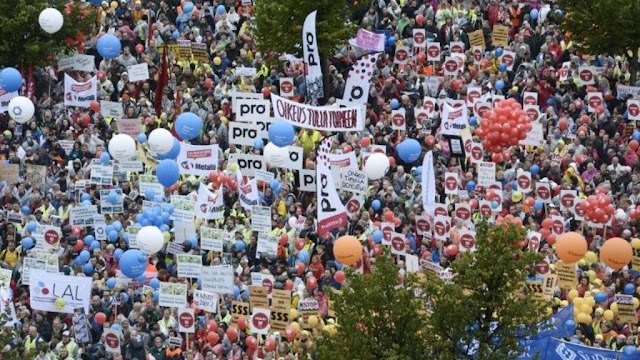 The ratings agency Fitch has affirmed the AAA rating on Finland's sovereign debt. But on reading Fitch's analysis, the justification for this is very hard to see.

Finland's economic situation is, to say the least, dire.  This is what Fitch has to say about it:


The Finnish economy is adjusting to sector-specific shocks in key industries (electronics, communications and forestry), is already experiencing the impact of an ageing population through a declining labour force, and is exposed to the weakness of Russia's economy (Russia is Finland's second-largest export market). The structural decline of key industries and a shrinking labour force have led to a sharp decline in productivity growth and in estimates of potential growth.

So, a serious fall in productive capacity due to supply-side shocks, unfavourable demographics and a Russian problem. This has significantly weakened Finland's external position:

The rise in external debt is evident from this chart: 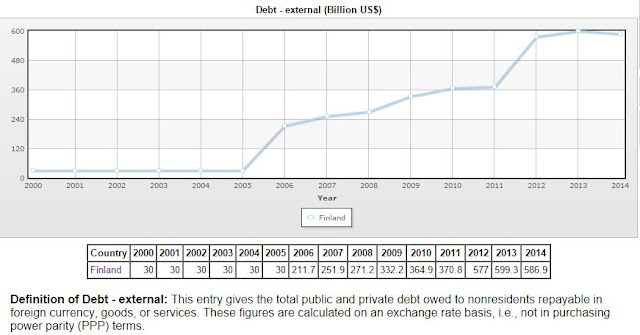 UPDATE. Ramanan points out that the chart above is gross external debt. Current net figures are hard to find (completely missing from Eurostat, and Bank of Finland only reports gross figures). Standard & Poors helpfully provides this table from March 2015 showing their gross and net external debt calculations: 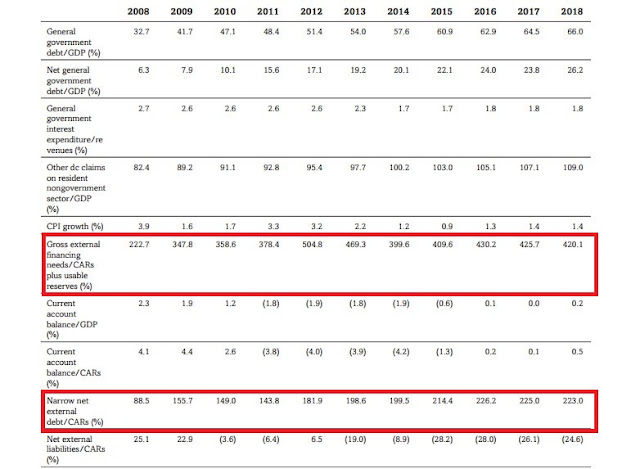 The rise in net external debt since 2008 is evident.

I am personally of the opinion that such a large increase in external debt (net and gross) is by itself sufficient justification for downgrade. High external debt seriously raises the likelihood of foreign exchange crisis and external default, particularly for members of fixed exchange rate systems.

But Finland's problems don't end there. It has been in recession since 2012:

And although the growth forecast for 2015 is now (just) positive, the outlook is hardly bright, according to Fitch:


Economic growth has been weak so far this year. Real GDP was broadly unchanged in 1Q15. In the second quarter of the year, GDP rose 0.2%. Investment and goods export growth have been weak, partly offset by private consumption and services exports. Fitch forecasts that GDP growth this year will be 0.3% - a slight downward revision from the last review. We have also revised our forecast for growth in 2016 to 1% from 1.3%, reflecting some negative impact on growth from the new government's fiscal consolidation plans.

Er, what's that - fiscal consolidation? In a stagnant economy with damaged productive capacity?

Well, the investment is welcome. But spending cuts, with unemployment at 9.7% and rising? No wonder there have been protests.

According to the BBC, the Finnish government says that the spending cuts are necessary to revive the economy:

How on earth reducing pensioners' housing allowances and squeezing people's incomes is supposed to revive the economy is beyond me. But wait - this isn't actually to do with reviving the economy:


"The Finnish state has contracted debt at a rate of almost a million euros (£730,000) per hour for seven years, day and night, every day of the week. We cannot continue like this," Mr Sipila said.

So it's all about debt, not growth. Yet growth is definitely Finland's biggest challenge. So why the focus on debt?

I noted in a previous post that the insane Eurocrats have decided that despite Finland's dire economic situation, the top priority for its government must be to reduce the budget deficit (currently just over 3% of GDP) and get debt/GDP under control. To ensure compliance, they have put Finland into the "excessive deficit procedure". As a Euro member, Finland has no choice but to do as they say or face fines and sanctions. That's where these austerity measures have come from - though the Finnish government, traditionally hardline, probably would have tightened the budget even without EU pressure.

It is not surprising that the Finnish government has opted for fiscal consolidation at the expense of growth and employment. What is surprising, and disappointing, is that the analysts at Fitch apparently think this is a good thing. Despite substantial evidence - including, now, from other Eurozone countries - that consolidation in a slump makes the fiscal position worse, not better, Fitch produces some optimistic forecasts for deficit/GDP:

I sometimes wonder if economic analysts have any understanding of multiplier effects. When the economy is on the floor, the fall in GDP from fiscal consolidation is likely to be considerably larger than the nominal cut in the government budget. Fitch trimmed its growth estimate for 2016 by a measly 0.3% to allow for this consolidation. That is nowhere near enough, and the growth estimate was already over-optimistic anyway. If the government goes ahead with these measures, in my view Finland can expect to be back in recession by 2017.

This will make Fitch's debt/GDP forecasts over-optimistic too:

Of course, if instead of embarking on austerity measures, the government concentrated on restoring growth, the figures might look a lot better. It's amazing what raising the denominator does to a ratio.

None of this adds up to the sort of profile that we would expect to see from an AAA-rated sovereign. To be sure, Fitch says the outlook is negative. But surely Finland's current situation is bad enough to justify a downgrade?

Well, there is this:

Right. So if all else failed, Finland could raid statutory pension plans to pay creditors.

So Fitch justifies Finland's AAA rating on the basis of unrealistic estimates for growth, unemployment and budget balance, and an (unstated) expectation that Finland's government would as a last resort steal money from its own pensioners to pay creditors.

Fitch is every bit as insane as the Eurocrats.


Image courtesy of the BBC.