Showing posts from February, 2013
Show All

The madness of Moody's 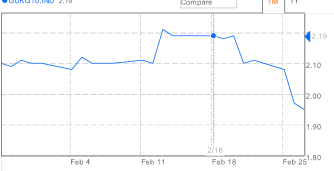 Moody's is mad. Not because of the UK downgrade , ridiculous though that is. Downgrading a sovereign currency issuer is simply silly. The Bank of England is the "buyer of last resort", so there is zero risk of the UK defaulting on its debt. And as FT Alphaville pointed out , downgrading a country because of the possibility of inflation breaks Moody's own definition of "default". Yes, bond-holders may be paid back in currency that is not worth what it was when they bought the bonds. But that doesn't mean they haven't been paid. "Soft" default, in Moody's definition, is not default. And anyway, inflation wasn't the risk that Moody's identified. The reasons given for the downgrade were poor growth and delayed fiscal consolidation: "The key interrelated drivers of today's action are:  1. The continuing weakness in the UK's medium-term growth outlook, with a period of sluggish  growth which Moody's now expects
19 comments
Read more

By Frances Coppola - February 21, 2013
Vox has an excellent article by the LSE's De Grauwe about the austerity measures in the Eurozone periphery that were imposed by policymakers in response to a buyer's strike among sovereign bond investors. As yields soared, particularly in Greece, there was a growing belief that the cause was high levels of public debt and structural inefficiencies, and that to bring yields down it was necessary to slash public borrowing and make structural reforms. There was also concern about the lack of competitiveness of periphery economies and their high unit labour costs: had they had their own currencies, devaluation would have been the corrective for this problem, but because of the Euro this was not possible and the only solution was to force down wages. The measures adopted in a number of countries to reduce public deficits and force down wages caused GDP to collapse across the Eurozone. And they are still causing it. The Eurozone is formally in recession and shows no real sign of rec
34 comments
Read more

I've mentioned in a previous post the idea of using fiscal tools to support monetary policy. In this post I want to explain what I mean. The prevailing view of fiscal policy is that it concerns the financing of government and the behaviour of the population. It has nothing to do with monetary policy and indeed can be antagonistic to it. In this era of monetary dominance, emphasis has been on the effect of fiscal policy over the long run, and in particular the use of "automatic stabilisers" to dampen the effects of the business cycle. We can say that from the monetary dominance perspective, the best fiscal policy is one that is set up to act as a counter-cyclical buffer and then left alone. And yet.....I have been discussing in recent posts the use of government debt as a money substitute in financial markets. That implies that fiscal policy must have a monetary effect, since government debt issuance is a key part of fiscal policy. The other key part of fiscal poli
10 comments
Read more 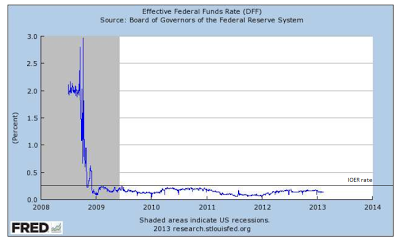 No, this isn't a post about derivatives. It's about the relationship between reserves and safe assets. I think it is  time I brought the two together and created a unified explanation of the behaviour of safe assets in the presence of excess reserves which earn a positive rate of interest.  The "interest on excess reserves" (IOER) debate and the safe assets issue are two sides of the same coin. On one side we have the central bank and the system of regulated banks: on the other side we have non-banks and the Treasury. Together, all of these make up the financial system.   This is how I see it working at present. The central bank creates excess reserves through buying assets held by the private sector (QE), mostly (but not exclusively) consisting of various forms of government debt. The central bank pays interest on those excess reserves, thus creating an interest-bearing safe asset for banks (but not non-banks). Banks won't lend when the Fed Funds ra
45 comments
Read more 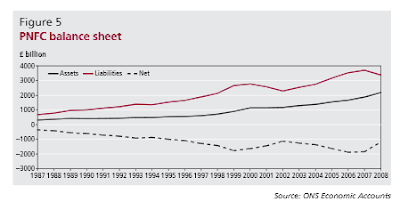 A research team at the ECB has issued a paper attempting to explain the origins of financial crises. This has of course been an enduring topic of analysis ever since the fall of Lehman, and just about every economist in the world has now had a go at it, with varying degrees of success. The ECB's paper makes a valiant attempt to fit the financial system into a DSGE model of the economy that previously ignored it. The maths is fearsome and I admit I skipped much of it. But they draw some important conclusions. Very early in the paper they accept the prevailing wisdom that  financial crises are endogenously determined - in other words, they happen as a consequence of behaviour within the system, not because of external shocks to it. Now this immediately causes a problem with the model. DSGE models work on the basis that shocks are exogenous - sort of like meteorite impacts on life on earth. But using the same analogy, an endogenous crisis would be CAUSED by the behaviour of life
19 comments
Read more

Bifurcation in the labour market

By Frances Coppola - February 12, 2013
Recent reports on the UK jobs market have once again been surprisingly upbeat. The FT, reporting on the North of England and the Midlands, noted that jobs were being created at quite a rate (paywall) . The ONS confirmed this in its Regional Labour market statistics for 23rd January. Employment is rising, particularly in the West Midlands and the Yorkshire and Humber region, and unemployment is falling, especially in the North East. Things are definitely looking good. Though there is still that productivity puzzle .... There's another puzzle, too. BDO produced a distinctly pessimistic report suggesting that business confidence was at an all-time low and we shouldn't expect recovery any time soon. But the Guardian reports that ICEAW & Grant  Thornton have produced a similar report saying that business confidence is at a two-year high. I wonder how two accountancy bodies managed to achieve such different results, and what this inconsistency tells us about the real state
30 comments
Read more

On the unintended consequences of new Government targets

By Frances Coppola - February 10, 2013
This is something of a cautionary tale. I think it's about time I explained why the financial crisis completely passed me by, except as a mildly interesting news item. The truth is, I was ill at the time. At the end of October 2007, after I had spent several months waiting for scans and doctor's appointments, and nearly 2 months waiting to see an NHS consultant, that consultant told me in no uncertain terms that I needed a major operation and why hadn't I been to see him sooner. Sigh. NHS bureaucracy..... Anyway, I signed up for the operation and was told that the waiting list was 4 months, during which time I would be provided with drugs to keep me going. Those drugs made me feel terrible but at least they kept me functioning, though I gradually became iller, of course - time doesn't stand still when you are on a waiting list. I continued working - with some difficulty - and waited for the call. In January 2008 I received the long-awaited call. But it wasn't fr
8 comments
Read more

By Frances Coppola - February 08, 2013
The UK's labour market is something of a puzzle. Employment is at an all-time high, but unemployment is higher than might be expected from the employment figures and productivity is falling like a stone. Numerous explanations have been put forward for this apparent inconsistency, most recently by the ONS , the IFS and the TUC . Even FT Alphaville had a go at it. Needless to say, none of these bodies agree on the causes. I've read all these reports, and in my view all of them make useful contributions. If there is one certainty in this matter, it is that there isn't a simple explanation. But I think they are missing something. The other day I wrote a post asking why there was such a rise in employment when unemployment was apparently not falling a great deal. Who are all these new people, where have they come from and why weren't they working (or unemployed) before? This sparked an intense debate on twitter about the nature of the new employment. And from it emerg
19 comments
Read more
More posts