Showing posts from July, 2012
Show All

By Frances Coppola - July 31, 2012
In my post " The Nature of Money " I noted that money's use as a store of value is secondary to its function as a medium of exchange, and commented that long-term savings should not be held as "money" but rather as hard assets or investments in productive activities. I made it clear that my personal belief is that the latter is far preferable, because it benefits not only the holder but the rest of society too. This attracted the attention of a number of people who appear to have an almost religious belief in the virtue of gold as a store of value. The result was a bruising three days of intense debate on twitter, which was only ended when I blocked several of these people and warned off the rest. I was frankly shocked by the fervour of their belief: the more convinced they were that eventually I would "see the light" the less I wanted to have anything to do with them. I felt much as an agnostic must feel when subjected to the attempts of religious c
197 comments
Read more

The necessary arrogance of elites

By Frances Coppola - July 27, 2012
Throughout history, there has been a tendency of elites – moneyed elites, intellectual elites, dynastic elites, religious elites – to regard themselves as fundamentally different from the rest of humanity. All fields of human endeavour develop elites, which are the brightest and best in those fields: so, for example, Olympic athletes are “elite” physical sportsmen and women, whose sporting prowess far exceeds the capability of ordinary mortals. But in many fields, once elites have developed they have a vested interest in maintaining themselves, whether or not they still have genuine excellence. And they create barriers to admission of people who are not “one of them” but who possess genuine ability. They use special language that is not known to ordinary people. They require particular social connections: in the most extreme form elite membership is restricted to members of the same family (dynastic elitism), but more commonly it is restricted to people who move in particular social
22 comments
Read more

The nature of money

By Frances Coppola - July 23, 2012
This rather rambling post is sparked by recent discussions with, among others, Positive Money and assorted goldbugs,  FTAlphaville's fascinating posts about e-money in Kenya , and the World Bank's wide-ranging investigation into forms of money used by those who don't have bank accounts - which (unbelievably) is more than half the world's population. People seem very confused about money. We have Positive Money saying that banks create money when they lend, but that in order to make payments they have to be supplied with money by the central bank. Then we have Tim Worstall insisting that banks don't create money when they lend - despite the fact that loan accounting involves the creation ex nihilo of a real deposit which can be spent like any other sort of deposit. Yes, the spending of that deposit has to be funded - but that brings us back to Positive Money and central bank money creation for payments....... As is usual when people have a major argument abou
22 comments
Read more

The shoebox shortage: part II of the Britham series

By Frances Coppola - July 20, 2012
In the little village of Britham , all is not well. It seems that a group of youths with more money than sense - and a liking for kite-flying - borrowed large quantities of shoeboxes from the bank, promising to make lots of money with them. What they actually did was cut them into pieces and attach them in orderly sequences to the tails of their kites. They then went up to the top of the hill overlooking the village to fly their kites. But on one particularly windy day, lots of the kites slipped from their owners' grasp and sailed up into the sky, never to be seen again. Now the local bank is short of shoeboxes, and the local paper reports that they are turning down people who want loans. The town is up in arms. Business is grinding to a halt and people are losing their jobs because of the lack of shoeboxes. The local mayor decides to do something.  Next to Britham's Printers is an equally stately-looking building with a sign outside saying "Britham's Boxes
26 comments
Read more

By Frances Coppola - July 18, 2012
It's morning in the charming little village of Britham. A man - let's call him John - goes into his local bank. "I want to borrow £1000", he says. "Let's see what we can do", says the bank manager. After close inspection of John's payslips and a few phone calls to local shops and tradesmen to check that John has always paid his bills and paid for his goods, the bank manager agrees to give him the loan. "l'll just sort that out for you now", he says. He disappears through the door into the back office. Once in the office, he gets out a shoebox. Into the shoebox he puts.....well, we'll find out later what bank managers put in shoeboxes. Then he seals the box and stamps it with an official bank stamp saying "£1000". He takes the box back out to where John is waiting. "Here you are", he says. "Here's your loan".  He and John shake hands, and John leaves, carrying his shoebox. John takes hi
10 comments
Read more

Do we really care who creates money?

By Frances Coppola - July 17, 2012
According to Positive Money , 97% of the money in circulation in the UK is created by private banks when they lend. Only 3% is money created by the central bank on behalf of the Government. Shock, horror! Actually, that sounded a bit high to me, so I looked into the origin of this interesting statistic. About 3% of the total money supply in the UK ( sterling M4 ) is indeed notes and coins in circulation. But Positive Money aren't correct to claim that the rest is entirely held by banks. They've ignored the little matter of central bank reserves.....This is actually rather more important than it sounds, since the effect of QE and a generally risk-off environment has been to encourage banks to keep more money in reserve accounts at the Bank of England rather than lending it to each other. So the true figure is probably more like 90%. Well, ok, that's still a lot, isn't it? No, it isn't. You see, nearly 90% of the UK population has at least one bank account. And
45 comments
Read more

By Frances Coppola - July 09, 2012
This afternoon, Paul Tucker, Deputy Governor of the Bank of England, appears before the Treasury Select Committee (TSC) to explain the Bank of England's role in the LIBOR-rigging scandal. And boy does he have some explaining to do. As Tim Worstall pointed out the other day, the Bank of England must have known that LIBOR submissions from HBOS and RBS both before and after the failure of Lehman in September 2008 were far lower than the rates they would realistically pay if they were to attempt to borrow in the interbank market. Both were shut out of the markets at the time and dependent on Emergency Liquidity Assistance (ELA) from the Bank of England.  This crisis funding was not declared to the public, and it seems that in order to keep it quiet, the Bank of England accepted much lower LIBOR submissions so that HBOS and RBS gave the impression of being solvent when they were actually at death's door. Of course, HBOS and RBS actually had no way of establishing what a realis
15 comments
Read more

I am a bank

By Frances Coppola - July 06, 2012
I am a bank. Honest, I really am. This is not a joke. You see, I lend people money. Or, more accurately, I allow them to run lines of credit, which I create for them out of thin air. Let me explain. My day job is teaching singing, much of it to teenagers in secondary schools. These teenagers' lessons are paid for by their parents. I invoice them for 10 lessons at a time and they are supposed to pay for the whole series of lessons before the series starts. In practice, hardly anyone does. About half will have paid by the 5th lesson and the remainder have to be chased. The vast majority do pay by the end of the series of lessons, but there are a small minority who have to be cajoled, threatened or even sued. Some negotiate with me for payment in instalments and then forget to make those payments. No doubt because of their own financial difficulties, the proportion of people who pay late is rising, as is the proportion of people who don't pay at all. In the last year I h
35 comments
Read more 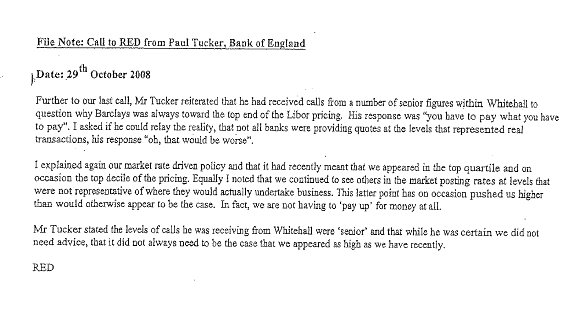 Following Bob Diamond's resignation this morning - forced, according to the BBC , by an unholy alliance of the Bank of England's Mervyn King and the FSA's Lord Turner - Barclays is fighting back. It has produced this statement in advance of Diamond's meeting with the Treasury Select Committee. The impression this statement gives is that Barclays feels it has been hung out to dry for manipulating a rate when they believed they were doing so under instruction from the Bank of England. And Barclays insists that other banks were submitting lower rates and that Barclays repeatedly complained to the British Bankers' Association (BBA), the Bank of England, the FSA and the Federal Reserve about this to no avail. If it's true that Barclays warned regulators that other banks were manipulating their submissions and regulators ignored the warnings, it doesn't exactly show the regulators in a good light. That's bad enough. But scroll down through the statement a
18 comments
Read more

On the demonisation of derivatives

By Frances Coppola - July 01, 2012
Ever since the financial crisis of 2007, there has been a prevalent belief that derivative financial products - swaps, options and the like - are a) useless and b) harmful. So, for example, in today's Guardian, Will Hutton castigates derivatives : Derivatives should rather be seen as economically purposeless constructs whose ease of manipulation in opaque markets makes the investment banks rich – while the rest of us take our chances. This is simply wrong. Derivatives, like all financial products, have real-world uses that benefit ordinary people and businesses. It is when they are MISUSED that the problems arise. And I would be the first to admit that in the last decade, misuse of derivatives has enriched a small minority beyond their wildest dreams and caused misery for millions. The latest scandal concerns a form of derivative use that is close to my heart. Retail customers - small and medium-size businesses (SMEs) - have been sold derivatives ostensibly to help them manag
13 comments
Read more
More posts