Showing posts from January, 2013
Show All 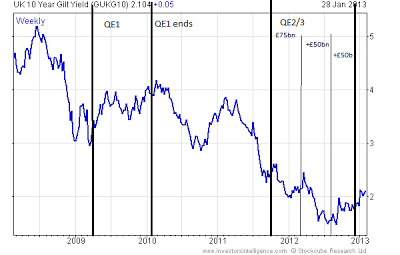 UK 10-year gilt yield 2008-13 showing QE: Why is there an evident spike starting autumn 2010 and continuing until early 2011 when there was no QE? (larger version here ) . For comparison, US 10-year Treasury yield: (larger version here ) Correlation, wouldn't you say? (thanks to @wonkmonk_ for spotting this) Well, the US was doing QE at that time. Could the UK's spike be due to the US's QE program? That suggests markets were arbitraging away differences between US Treasury and UK gilts yields. In which case one or the other effectively has no control whatsoever of monetary policy. Hmmm. GBP/USD historical rates 2008-13: (larger version here ) Steady, really. So this could be arbitrage. But we don't know the direction - are USTs driving gilts or the other way round? Brent crude 2008-13: WTI crude 2008-13 (larger versions here and  here ) If you remove the downwards trend on both US and UK charts (
47 comments
Read more 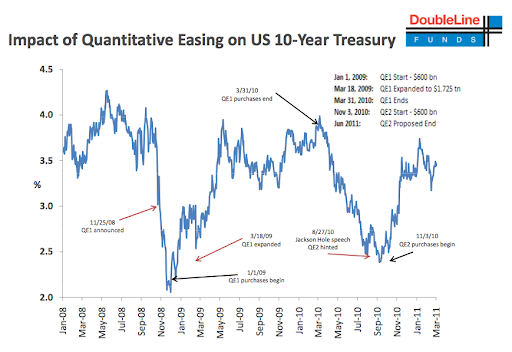 Yesterday I had a long conversation with someone with serious monetarist leanings, who tried hard to convince me that QE raises long bond yields. His argument was that government bond yields have nothing to do with central bank policy rates and can therefore be separately influenced via asset purchases. So Bernanke cuts the federal funds rate to near-zero, causing real interest rates on cash deposits and near-cash instruments to fall below zero, while using QE to induce expectations of higher inflation and thereby force up bond yields: @ frances_coppola @ wonkmonk_ He depresses Fed Funds to ZLB, and when using QE raises short term bond rates. Two separate interest rates. — Ben Jackman (@btjaus) January 27, 2013 And to support his argument, he produced this chart: (click here for larger version) Now, this does indeed appear to show QE causing bond yields to rise, not fall. And I admit this did make wonder briefly whether what we have all been told about QE
33 comments
Read more

By Frances Coppola - January 27, 2013
On Wednesday last week I cancelled all my teaching so I could look after my mother. Following a fall last August when she broke her hip, my mother is now disabled and my father is her full-time carer. But he had a hospital appointment that day, so I stepped in. This doesn't sound too serious, does it? Except that my father will be 80 in April and has health problems of his own. And the rest of my family are hundreds of miles away. I have no doubt that as he gets older and she gets frailer, there will be more calls on my time. Just as when my children were young I had to organise my work around their needs, so it seems likely that eventually I will have to organise my paid work around the needs of my parents. And perhaps it will become impossible for me to do what I currently do. After all, singing teaching - particularly in schools - isn't something that can be easily combined with caring for frail elderly people. But I am not free to become a full-time carer for elderly pa
6 comments
Read more

The End of Britain? 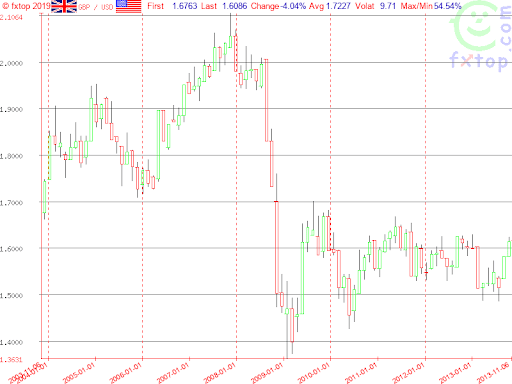 There is a very scary bulletin from the investors' magazine MoneyWeek doing the rounds. It is entitled " The End of Britain" , and forecasts an imminent disastrous financial collapse. I've checked with the editor of MoneyWeek, and yes it is genuinely their production. The reason why it looks different from the rest of their output is because it was written by their marketing department. And that of course gives the clue as to what this is all about. Whether or not they genuinely believe there will be a disastrous collapse is not the point, though to be fair MoneyWeek is generally fairly pessimistic about the UK and has been forecasting a property market collapse for several years now. No, this is all a marketing ploy. They want to scare you into buying a subscription to their magazine. I could just say "Don't do it", but actually as this bulletin is seriously scary I think it would be more useful if I took it apart and debunked it. So here goes. T
234 comments
Read more

By Frances Coppola - January 19, 2013
This is version 2 of this post, since I got it massively wrong the first time round. Thanks to cig for correcting me (see comments).  Simon Wren-Lewis weighed in on the safe assets discussion last week - his post is here and I strongly recommend a read even though it is definitely wonkish (I had to read it twice). Simon's discussion of collateral effects on interest rates adds a dimension that has so far been missing from the debate and helps to explain why long-term, as well as short-term, debt is needed by the financial system - a point that Pozsar misses. Long-term government debt can be used as collateral in the creation of shorter-term private sector "safe assets", which reduces the need for short-term government debt as collateral. Simon suggests that government depositing cash from excess government borrowing at the central bank, as I suggested, would not be tenable. He doesn't explain why, so I thought I would have a go. When you consider the central b
18 comments
Read more

So what's the catch?

By Frances Coppola - January 19, 2013
Oh brilliant. I produce a post trying to explain in non-mathematical terms the equivalence of government  debt and interest-bearing money in a fiat money regime. And I immediately get hammered for - variously - writing about the "money tree", playing accounting tricks instead of doing real economics, and inventing a scenario where no-one ever has to pay taxes and governments just print endless amounts of money. How on earth my critics managed to deduce that lot from my post I don't know, but I will at least address the last of these, which is the only serious point. I was awfully tempted to ask my "economics" critic to define "real economics"..... Anyway. let me explain. No, I did not, and do not, suggest that governments can just print money ad infinitum to meet their spending obligations. And no, I did not, and do not, suggest that no-one needs to pay taxes. On the contrary. Taxes are ESSENTIAL in a fiat currency regime. The value of the currency
25 comments
Read more

Government debt isn't what you think it is

By Frances Coppola - January 18, 2013
Government debt is not debt in any meaningful sense of the word. Well, actually that's not quite true. Let me clarify. The debt of genuinely sovereign governments that issue their own currencies, have properly functioning central banks and full control of monetary policy is not debt in any meaningful sense of the word. This all stems from the nature of our fiat money system. In a fiat money system, governments create money. More accurately, money is created by private banks as agents of the state, backed and supported by the central bank which is part of government. The "independence" of central banks is pure fiction. Central banks may operate independently of political control - if politicians allow them to - but they are part of the government machine just as much as government treasury departments are. Most central banks - with the notable exception of the Federal Reserves - were originally created to fund governments, but their role has changed over the centurie
30 comments
Read more

By Frances Coppola - January 16, 2013
"Providing reserves  and exchanges for the whole world is too much for one country and one currency to bear." Henry H. Fowler U.S. Secretary of the Treasury There has been quite a bit of puzzlement in some quarters as to why I savaged BIS over the whole idea of a limitless supply of government-produced safe assets purely to meet the needs of the financial system. Firstly, let me make it clear that I do not believe that any asset is ever really "safe" . Nor do I believe that global investors have any right whatsoever to expect national governments to provide them with what amounts to unconditional backing for their deposits. The first duty of national governments is to their people, not to the needs of a global financial elite. And it is quite wrong of global financial elites to pressure governments into issuing debt that they do not need purely in order to provide them with liquidity. Nor should global financial elites impose austerity measures that are not w
23 comments
Read more
More posts