Showing posts from May, 2013
Show All

There's a problem with the transmission....

By Frances Coppola - May 31, 2013
In my last post , I pointed out that QE does not work when the transmission mechanism for monetary policy is impaired because of a damaged and risk-averse financial sector. This caused some confusion among those who think that throwing money at banks automatically makes them lend, so I attempted to explain it on twitter. Predictably, I ended up in an extended discussion first with David Beckworth and then with Andrew Lilico, in the course of which it became clear - to me, at any rate - that not only does QE fail when damaged banks aren't lending normally, but it actually impairs the transmission mechanism itself. This might explain why QE seems to become less effective the more of it you do. It's like hard water. It gradually clogs up its own pipes. To explain this, let me first go through the money creation process in our fiat money system and the ways in which QE influences that process . The monetary base, M0, is created by the central bank. It consists of notes & coi
41 comments
Read more Inflation is dead . Well, in the US, anyway: What is curious is that the US is doing QE. Lots of it. Which is supposed to raise inflation, isn't it? Then there is Japan. Japan recently embarked on an extensive QE programme designed to raise inflation to 2%. Here's the path of Japanese inflation: It's very easy to see where QE started. It's when inflation fell off a cliff. Well, ok, it might have done that anyway, I suppose. Correlation doesn't equal causation, and all that. But it is curious. Japan has, of course, done QE before. A look at the inflation path for the period 2001-2006, when Japan was doing QE, doesn't suggest a close relationship between QE and inflation.   The initial impact seems to have been deflation, though again we could do with a counterfactual. But for the rest of the period QE seems to have had little impact on inflation. In fact  a researcher at the IMF  concluded that QE's effect on inflation was small. The UK do
49 comments
Read more

By Frances Coppola - May 20, 2013
House prices in the UK are too high. How much too high they are depends on where you are : house prices have been rising in London because rich Asian businessmen and French aristocrats are buying up prime real estate as a safe haven investment for their filthy lucre, apparently. But outside London and the South East, house prices have actually fallen over the last few years, a bit. But not much. Certainly not enough to make them affordable for young people on median incomes. The trouble is, there are a lot of people out there who already own houses. Many of them are relying on the value of their property to top-up their pensions. And all of them have votes. The total voting power of homeowners in the UK far exceeds that of the young people who are being priced out of the housing market. It would be electoral suicide at the moment for any political party to sign up to policies that would cause a significant fall in house prices.  However, there is future electoral benefit in mak
57 comments
Read more

By Frances Coppola - May 08, 2013
Below is a list of the things I have been reading and using as background to the posts I have written this month. It's not exhaustive. Regulation Financial Conduct Authority documents: Risk outlook -  http://www.fsa.gov.uk/static/pubs/other/fcarco.pdf Business plan -  http://www.fsa.gov.uk/static/pubs/plan/bp2013-14.pdf Prudential Regulatory Authority documents: http://www.bankofengland.co.uk/publications/Documents/praapproach/bankingappr1304.pdf http://www.bankofengland.co.uk/publications/Documents/praapproach/insuranceappr1304.pdf Economics Noah Smith on equilibria: http://noahpinionblog.blogspot.co.uk/2013/04/what-is-economic-equilibrium.html QE is a joke - wonkmonk_'s charts showing worldwide govt bond yield convergence http://img809.imageshack.us/img809/9585/qeisajoke.png Free e-book of Smith's The Wealth of Nations (via Paul Krugman)  http://www.gutenberg.org/files/3300/3300-h/3300-h.htm Scott Fullwiler on endogenous money and monetary policy  htt
4 comments
Read more

The financialisation of labour

By Frances Coppola - May 07, 2013
My latest post at Pieria : "We are used to thinking of workers as free agents who sell their labour in a market place. They bid a price, companies offer a lower price and the market clearing rate is somewhere between the two. Market economics, pure and simple. But actually that's not quite right. The financial motivations of workers and companies are entirely different. To a worker, the financial benefit from getting a job is an income stream, which can be ended by either side at any time. But to a company, a worker is a capital asset. This is not entirely obvious in a free labour market. But in another sort of labour market it is much more obvious. I'm talking about slavery. Yes, I know slavery raises all sorts of emotional and political hackles. But bear with me. I am ONLY going to look at this financially. From a financial point of view, there are more similarities than differences between the slave/slaver relationship and the worker/company relationship - and t
7 comments
Read more

The equivalence of debt and equity 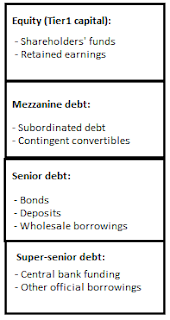 Much is being made at the moment of the idea that banks should have more capital . Predictably, there is huge confusion about what this actually means, and the usual suspects are once again mixing up deposits and capital (deposits are debt) and claiming that QE recapitalises banks (no it doesn't, but it does provide them with liquidity). I don't want to explain the difference again here, but if anyone is still unclear about what "capital" consists of for a bank, read this . Predictably, banks and other financial institutions are fighting back. Concerns are being expressed about the effect on competition of EU's proposal for money market funds (MMFs) to have capital and liquidity reserves. And banks worried about their return on equity (already shot to pieces) claim that raising more capital would be a) unacceptable to their shareholders b) hugely expensive c) impossible anyway. Meanwhile, Anat Admati and Martin Hellwig, in their book " The Bankers' N
44 comments
Read more
More posts