Showing posts from September, 2012
Show All

By Frances Coppola - September 26, 2012
From the Oxford Dictionary:     folly :  noun   ( plural  follies ) 1  [ mass noun ]  lack of good sense; foolishness: an act of sheer folly [ count noun ]  a foolish act, idea, or practice: the follies of youth 2  a costly ornamental building with no practical purpose, especially a tower or mock-Gothic ruin built in a large garden or park. Origin: Middle English : from Old French  folie  'madness', in modern French also 'delight, favourite dwelling'  (compare with  folly (sense 2) ) , from  fol  'fool, foolish' The Business Secretary, Vince Cable, has outlined plans for what he calls a Business Bank, with the aim of improving the flow of credit to small & medium-size businesses. "We need a new British Business Bank with a clean balance sheet and an ability to expand lending rapidly to the manufacturers" said Cable to his fellow party members at the Liberal Democrat conference. Wow, I thought. The Government has done another U-
9 comments
Read more

The day after tomorrow

By Frances Coppola - September 21, 2012
The title of this post is unashamedly plagiarised from the film, The Day after Tomorrow , in which extreme consequences follow from climate change. Three enormous storms develop - one each over the US, Europe and Asia - which together force the planet into a new Ice Age, killing millions and forcing the survivors to move south. The science behind this film has I think been largely discredited from a climate change point of view. But I have been struck by the similarity with our economic situation. We have, indeed, three enormous storms - one each in America, Europe and Asia. And the consequences may be a fundamental realignment of the global economic landscape. Storm 1 is already familiar to us. This financial storm is progressively destroying the Western system of finance. The "global" financial crisis of 2008 was centred over the US, the originator of the subprime debt collapse that underpinned the disaster, and the UK because of its primacy in global finance. But the
12 comments
Read more

By Frances Coppola - September 13, 2012
Someone has just put this comment on my post " The Golden Calf ": Luke 10:30-37 Jesus replied, “A man was going down from Jerusalem to Jericho, and he fell among robbers, who stripped him and beat him and departed, leaving him half dead. Now by chance a priest was going down that road, and when he saw him he passed by on the other side. So likewise a Levite, when he came to the place and saw him, passed by on the other side. But a Samaritan, as he journeyed, came to where he was, and when he saw him, he had compassion. He went to him and bound up his wounds, pouring on oil and wine. Then he set him on his own animal and brought him to an inn and took care of him.  And the next day he took out two denarii and gave them to the innkeeper, saying, ‘Take care of him, and whatever more you spend, I will repay you when I come back.’ Which of these three, do you think, proved to be a neighbor to the man who fell among the robbers?” He said, “The one who showed him mercy.” And Jesu
42 comments
Read more

The illogicality of the IMF

By Frances Coppola - September 11, 2012
The IMF has just produced a new report on Ireland . It is not happy reading. But it is interesting- not least because it says as much about the beliefs of the IMF economists producing the report as it does about Ireland. The report is structured in four parts: 1. Household consumption, wealth and saving 2. Access to credit, debt overhang and economic recovery: the Irish case 3. Medium-term fiscal consolidation in Ireland: growth-friendly, targeted, sustainable 4. Averting structural unemployment in Ireland Each of these is in effect a separate report in its own right, and there is no attempt to draw over-arching conclusions from the findings of the four reports. Consequently the recommendations from one report are contra-indicated by recommendations from another report. Really the IMF should do better than this. But that's not my main issue with this report. It's the appalling logic. Part 1, the Household Consumption, Wealth and Saving section, notes that Irish ho
2 comments
Read more

By Frances Coppola - September 06, 2012
After days and days of objections from the Bundesbank, threats to resign from its chairman, secret meetings, press leaks and shady deals, Draghi has got his way. The ECB will make "unlimited purchases" of certain Eurozone nations' government bonds with maturities of up to three years. It will use newly-issued euros to make these purchases. To address concerns about debt monetization, the ECB will sterilise these purchases (withdraw the newly-issued money from circulation) by some means yet to be defined. Firstly, let's be completely clear about the justification for this. It is absolutely not to relieve the problems of debt-laden sovereigns. It is to protect the Euro. As I pointed out recently , the stability of the Euro is under threat because of a growing belief among investors that some countries will abandon the Euro and issue their own currencies. According to Draghi, interest rate policy is now ineffective in those countries that investors think might leave th
18 comments
Read more 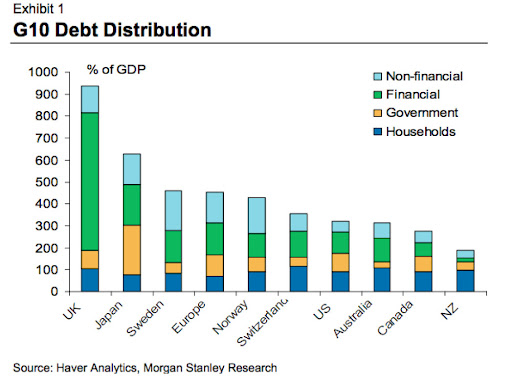 I've been meaning to take this chart apart for ages. It first appeared towards the end of 2011 and caused a considerable stir. Writers around the world castigated the UK for its profligacy. And from some Americans there was almost palpable glee that the smug UK was in a worse mess than the US. The French were facing a ratings downgrade at the time, and at least one writer used this chart to justify Sarkozy's argument that it was the UK that should be downgraded, not France. Review after review highlighted this "excellent" chart, and went on to blame the UK's dominant world position in financial services for its debt crisis. And it's still doing the rounds. It popped up on Twitter again last night. Which reminded me that it really, really needs debunking. Not one of the many articles featuring this chart that I have read questioned its accuracy or pointed out that Morgan Stanley had provided neither an explanation of how the chart was constructed
7 comments
Read more
More posts