Showing posts from March, 2012
Show All

By Frances Coppola - March 26, 2012
This is a post I've been meaning to write for quite a while now. I've been aware for some time that there seem to be two distinct groups of people in the world of politics and economics, who see the world in fundamentally different ways and don't really understand each other. It's as if one group are landlings, only secure when they have hard land under their feet and terrified of drowning in deep water, and the other group are sea creatures, happy floating in an unstructured, boundary-less medium but parched and shrivelled on dry land. Today, I commented on an article in the Guardian . I agreed with some of  what the writer was saying, but was concerned about his factual errors and inaccurate statistics. This is not uncommon whenever I am reading articles by people of left-wing persuasion.  Forgive me: I do not mean to make a political point, and I do not intend this as criticism. But it seems to me that hard facts and figures don't sit well with many people whos
13 comments
Read more 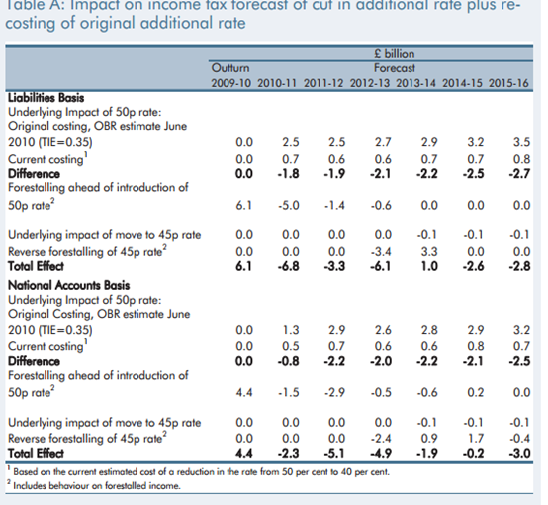 This blog is my contribution to the debate about how much the 50p tax rate might have raised if it had ever got the chance, and how much in comparison the 45p tax rate could be expected to raise. And, of course, whether this has anything at all to do with the real reasons for tinkering with the top tax rates. The Office of Budget Responsibility's (OBR) estimates of the tax receipts from both the 50p and 45p tax rate are on p. 111 in their Economic Forecast  (pdf). The table refers to "forestalling" about the 50p rate, and "reverse forestalling" about the 45p rate, and provides estimated figures for both. "Forestalling" means bringing forward income in anticipation of a future tax rise, and "reverse forestalling" is delaying income in anticipation of a future tax cut. Both the 50p and 45p rates were announced a year before their introduction. It is hardly surprising that people who are able to vary the times at which they receive income -
5 comments
Read more
More posts