Showing posts from November, 2012
Show All

OSI, PSI, the IMF and fantasy 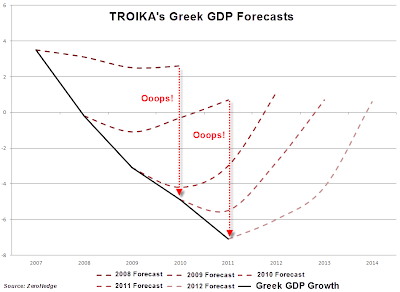 After much intense negotiation, it seems there is a new deal for Greece. Or at least that is how it has been presented in the media. But what sort of deal is it, and does it solve the Greek problem? The wording of the Eurogroup's statement  does not suggest that there is a "deal", as such. All it says is that the official sector - the ECB and Eurogroup - may be prepared to accept poorer returns on their holdings of Greek debt. The specific measures that they "would consider" are the following: 1% reduction in interest rates on the loans made available under the "Greek Loan Facility" (the first bailout) 0.1% reduction in the fees paid by Greece for EFSF guarantees of its debt deferral of interest for ten years on EFSF loans (the second bailout) extension of maturities on EFSF and bilateral loans by fifteen years  repatriation of interest paid by Greece to the ECB and national central banks (the "Eurosystem") These measures are condi
33 comments
Read more

About those UK CPI inflation figures....

The UK's CPI inflation figure for October 2012 rose by 0.5% to 2.7%. A small rise had been predicted, but this was much larger than expected. The ONS attributed the rise to increases in tuition fees, food and transport costs. I shall discuss the implications of these components shortly. Not surprisingly, the inflation hawks were out in force. Market Oracle led with a "shock, horror" headline: UK CPI Inflation Soars Despite Bank of England Deflation Propaganda, Shocks Academic Economists  And they showed this chart as evidence of what they called an "inflation mega-trend": (for larger version, click here ) And Andrew Sentance, in a news release from Price Waterhouse Coopers, made the following pessimistic prognosis: "UK inflation remains stubbornly above the 2% target. And with further energy and food price rises in the pipeline, it could rise further in the coming months. This would reinforce the squeeze on UK consumers and add to concer
20 comments
Read more

A sensible marriage (of politics & economics)

The illusion of safety

By Frances Coppola - November 08, 2012
I have recently been reviewing various proposals for making the financial system "safer". Most of them involve some kind of full reserve banking, while one (Gary Gorton's) looks at improving the safety of the shadow banking system without subjecting it to the same rules as licensed banking. But all of them rest on the idea that there is such a thing as a "safe" asset. The concept of "safe" (i.e. risk-free) assets has existed for a long time. Pricing models base themselves on the "risk-free rate". The instrument that is usually used as the proxy for "risk-free asset" is the United States Treasury (UST), but until recently all sovereign debt was regarded as risk-free, at least for bank capital adequacy requirements. This led to banks loading up on the debt of Greece, Spain, Portugal etc. because those assets required no capital allocation but gave a better return than German bunds or UK gilts. They should have paid more attention
32 comments
Read more

By Frances Coppola - November 01, 2012
At the recent Occupy debate on "Socially Useful Banking", Andy Haldane argued strongly for culture change in banking, and particularly in retail banking - the sort of banking that ordinary people rely on for their payments, their short-term savings and their loans. And he claimed that structural separation of retail banking from what are viewed as "higher-risk" activities such as investment banking and trading would end cross-contamination of culture and enable retail banking to return to its roots in relationship management and judgement based on local knowledge. He said that the ring-fencing of retail banking as proposed in the Vickers report on reform of banking may not be enough and full separation would be considered if necessary. The roots of his remarks lie in the prevalent belief that the changes in retail banking in the 1980s/90s were a consequence of the liberalisation of investment banking in the so-called " Big Bang " of 1986. He comments th
23 comments
Read more
More posts