Showing posts from September, 2017
Show All

On the evening of Friday, September 22nd, the credit ratings agency Moody's downgraded the UK's credit rating. Admittedly, it was only by one notch. But coming as it did hard on the heels of Theresa May's grand speechin Florence , it was a shattering blow.  Credit ratings agencies lost much of their lustre in the financial crisis of 2008, when they were revealed to have been complicit in the mispricing of complex financial derivatives – the “toxic waste” that brought down some of the world’s largest financial institutions. So it is tempting to dismiss Moody’s action as pointless and its analysis as economically illiterate. I confess that I have done so myself, in the past. But this time, Moody’s is on the money. It tells a story of a tragically weakened government struggling with a legacy of policy errors from previous governments as well as the growing likelihood of a chaotic and potentially disastrous Brexit. Moody’s gives two main reasons for the downgrade:
12 comments
Read more

We need to talk about productivity 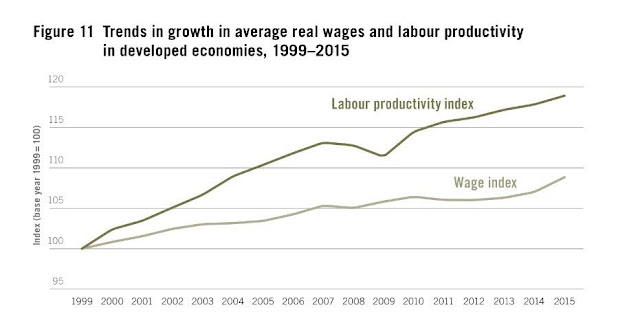 "We need to discuss the complete disconnect between the marginal product of labour and labour wages," said Sir Chris Pissarides, speaking on the closing panel of the Lindau Economics Meeting. I tweeted this comment. Laurie MacFarlane of the New Economics Foundation promptly responded with this chart that brilliantly illustrates Sir Chris's point: "Quite why marginal productivity theory is still taught as something which explains the real world is beyond me," commented Laurie. Marginal productivity theory says that profit-maximising firms will only employ workers who can generate at least as much additional return for the firm as they are paid. Expressed like this, it seems sensible: why would a firm employ a worker who is a net cost? But marginal productivity theory also says that the amount firms pay their workers is equal to their marginal product - in other words, that wages rise in line with productivity. This is demonstrably untrue. Wages have no
7 comments
Read more
More posts