And particularly in Europe, as this chart shows: 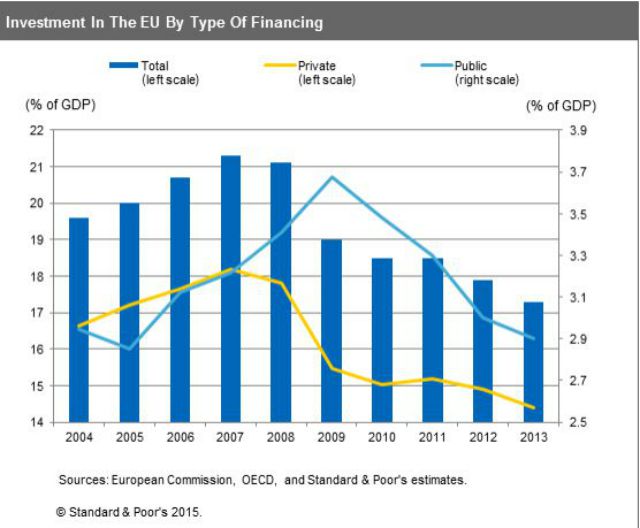 The ratings agency Standard & Poors has called for governments everywhere to increase investment spending. It also says they need to improve the efficiency of the spending they are already doing.

Private sector investment spending all over the world fell after the 2008 financial crisis. In Europe, where the crisis started earlier, it started falling in 2007. And it has not recovered. Private sector investors remain risk-averse and fearful of losses, chasing safe havens and unwilling to invest long-term in infrastructure, skills and R&D.

When the private sector will not invest, the job falls to government. And immediately after the financial crisis, governments did step up, increasing investment spending as private sector investment fell. Some governments have continued to invest ever since, notably China, which still spends about 8.5% of GDP every year (much of it outside its borders), and India, which is spending about 4.7%. But most governments have cut back investment spending in order to consolidate their budgets. The result is a widespread investment chill that is depressing growth and keeping unemployment elevated in far too many countries......