By Frances Coppola - September 13, 2015
In July 2008, the European Commission decided that the UK had an "excessive deficit" under the terms  of Article 104 of the Maastricht Treaty. Estimating that Government budgetary plans for 2008-9 would result in a deficit of 3.5% of GDP, the Commission said


The excess over the 3 % of GDP reference value is not exceptional in the sense of Article 104(2) of the Treaty. In particular, it does not result from an unusual event outside the control of the United Kingdom authorities, nor is it the result of a severe economic downturn. The Commission services' spring 2008 forecast projects UK growth to slow in 2008 and 2009 to annual rates below potential. Nevertheless, GDP growth is expected to reach 1,7 % in 2008 and 1,6 % in 2009. The excess over the 3 % of GDP reference value is also considered not temporary, with the Commission services forecasting, on the basis of unchanged policies, a deficit ratio in 2009/10 still higher than 3 % (at 3,3 %). This indicates that the Treaty requirement concerning the deficit criterion is not fulfilled.

And it told the UK government to sort itself out pronto:


- The United Kingdom authorities should put an end to the excessive deficit situation as soon as possible and by financial year 2009/10 at the latest, in accordance with Article 3(4) of Council Regulation (EC) No 1467/97, by bringing the general government deficit below 3% of GDP in a credible and sustainable manner.

- To this end, on the basis of the Commission services' spring 2008 forecast, the authorities should ensure a structural improvement of at least 0.5% of GDP in 2009/10.

The Council establishes the deadline of 8 January 2009 for the United Kingdom authorities to take effective action to this end.

Now, we all know what happened next, don't we? 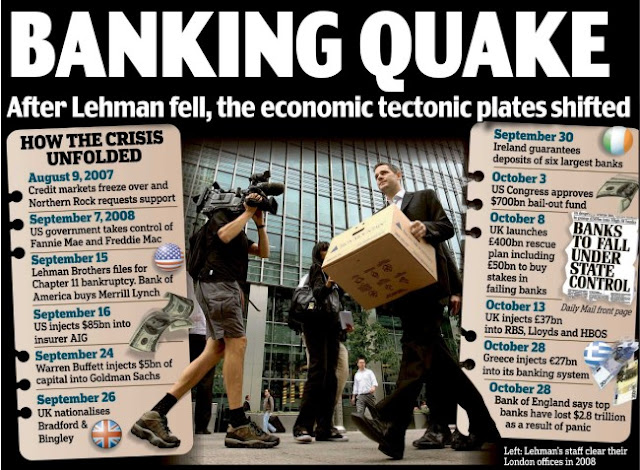 By the time of the January 2009 deadline the UK was in recession. European Commission staff forecasts at that time envisaged a GDP fall of 2.3% in 2009, though they still thought growth in 2008 would be slightly positive. You would think that the European Commission would decide that fiscal consolidation should be postponed, wouldn't you? Not a bit of it. In April 2009 the Commission reviewed the UK's progress against the targets for deficit reduction set in July 2008, and concluded that:


The United Kingdom has not taken action in response to the Council Recommendation of 8 July 2008 within the period laid down in that Recommendation.

And despite acknowledging that the exceptional measures taken by the UK government in response to the financial crisis were in line with the European Economic Recovery Plan agreed in December 2008, the insane Eurocrats simply extended the deadline for the fiscal adjustment by six months:

Needless to say, the UK failed to comply with this deadline too. The European Commission's economic forecasts proved wildly optimistic: the UK economy collapsed by 4% in the fourth quarter of 2008 and shrank by nearly 6% in 2009.

The GDP fall itself increased the deficit in relation to GDP. Automatic stabilisers and a serious fall in tax receipts further increased it, and the fiscal stimulus under the EERP also added to it. By the time of the second deadline, far from reducing, the projected deficit for 2009-10 had increased to 13% of GDP.

So what did the Eurocrats do? They did at least acknowledge that the UK government's failure to meet its targets was due to "exceptional circumstances". But then they insisted on fiscal consolidation starting in 2010, with a view to eliminating the "excessive deficit" by 2014-15:

(a) implement the fiscal measures in 2009/10 as planned in the 2009 Budget, avoiding further measures contributing to the deterioration of public finances, and start consolidation in 2010/11 in order to bring the deficit below the reference value by 2014/15;

(b) to this end ensure an average annual structural budgetary adjustment of 1¾% of GDP between 2010/11 and 2014/15, which should also contribute to bringing the government gross debt ratio back on a declining path that approaches the reference value at a satisfactory pace by restoring an adequate level of the primary surplus;

This casts the austerity measures implemented by the Coalition government on coming to power in May 2010 in a different light, doesn't it?

The Coalition's austerity measures met with the approval of the Eurocrats:


On current information it appears that the United Kingdom has taken action representing adequate progress towards the correction of the excessive deficit within the time limits set by the Council. In particular, the measures announced in the June 2010 Emergency Budget will further increase the size of fiscal consolidation in 2010/11 and also significantly strengthen the planned pace of deficit reduction over the medium-term.

And on that basis, they decided no further action to force persuade the UK to deal with its deficit was needed. Kudos to Osborne for getting Brussels off his back, yes?

Not quite. The story doesn't end there. Fast forward to May 2015 - yes, the month of the UK's latest General Election, in which the Conservatives won outright. The UK was supposed to have brought its budget deficit below 3% of GDP by then, so the European Commission reviewed the UK's progress against this target. This is their conclusion:

And their latest recommendation follows on, of course:


(1) The United Kingdom should put an end to the present excessive deficit situation by 2016-17 at the latest.

(3) The United Kingdom should fully implement the consolidation measures incorporated into all budgets and Autumn Statements up to and including the 2015 budget to achieve the recommended structural effort, with any modifications being fiscally-neutral in relation to the current plans. The United Kingdom should further detail the expenditure cuts in the upcoming Spending Review. These are necessary to ensure the correction of the excessive deficit by 2016-17.

(4) The United Kingdom should accelerate the reduction of the headline deficit in 2015- 16 and 2016-17 if economic, financial or budgetary conditions turn out better than currently expected. Budgetary consolidation measures should secure a lasting improvement in the general government structural balance in a growth-friendly manner. In particular, further cuts in capital expenditure should be avoided.

(5) The Council establishes the deadline of [15 October] 2015 for the United Kingdom to take effective action and, in accordance with Article 3(4a) of Council Regulation (EC) No. 1467/97, to report in detail the consolidation strategy that is envisaged to achieve the targets.

And for good measure, it adds a requirement for the UK to commit to "comprehensive structural reforms", which is code for "take 5,000 lines and a detention". Teacher is not pleased.

But actually this whole saga is hilarious. The European Commission has no power whatsoever to force the UK to implement its austerityfest. The original European Council "excessive deficit" recommendation from 2008 somewhat shamefacedly admits this (my emphasis):

And the UK government robustly reinforced this in its response to the 2015 European Commission review (my emphasis):


The UK is not a member of the single currency and cannot face sanctions under the EU’s SGP. The UK’s obligation under the SGP is to “endeavour to avoid an excessive government deficit” as a result of its Protocol to the EU Treaties (Protocol 15).

Nonetheless, the European Commission undoubtedly is pressuring the UK government over deficit reduction. After all, it is trying desperately to whip a set of recalcitrant Eurozone members into shape, including - most importantly - France, which is resisting every step of the way. How on earth can the European Commission coerce France into "fiscal responsibility" when its neighbour across the Channel is blithely ignoring the Stability and Growth Pact?

So Osborne, having successfully got the Eurocrats off his back in 2010, has tried the same trick again. He has produced plans that actually exceed the latest fiscal targets. Though from the tone of the Commission's report, it does not seem that they will be quite so relaxed about progress monitoring this time round. But they won't want to rock the boat ahead of Britain's EU referendum.

Or - will they? I'm not so sure. After all, they are insane.