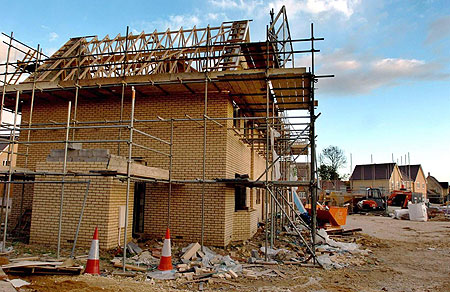 There is a widespread view that much bank lending is unproductive, i.e. does not raise GDP – or if it does, it does so in an unsustainable way by inflating asset prices or increasing inflation, rather than by increasing production.  Many proposals for bank reform therefore envisage restricting banks to “productive” lending, by which usually seems to be meant business finance and short-term consumer credit. Financial transactions on secondary markets, and the purchase of second-hand property, are regarded as unproductive.

This appears attractive. Banks do indeed lend far more for property purchase than they do for business finance, and most of the properties purchased are second-hand. So, the thinking goes, if we could eliminate unproductive housing finance, banks would lend more to businesses, and that would mean higher GDP in the longer term.

But I’m afraid there is a serious fallacy here. Lending for secondary market purchases does contribute to GDP, and not just in unhealthy asset price inflation. Without secondary markets, primary markets are diminished, and – by extension – so is GDP.

Here is an example. Suppose I buy a brand-new house off plan. Clearly, the building of my new house employs a significant number of people in various trades, who collectively create a “product” – a house - so my purchase is a GDP transaction. The bank that lends me the money to buy my house has therefore lent productively. Few in the UK would disagree with this. But in Spain or Ireland they might see things differently: after all, building houses there became a wholly unproductive activity prior to 2008.

But suppose I buy a listed building with no roof, rotten floors, shattered windows and holes in the walls, which I then restore for subsequent sale?  For the restoration, I employ a significant number of people in various trades, who collectively create a “product” – a refurbished house – that can be sold for a much higher price than the original dilapidated shell. Clearly, this contributes to GDP. It also brings into use a house that previously was not suitable for habitation. Please tell me why the borrowing to finance this should be regarded as “unproductive” when the borrowing to buy a brand-new house is not?

Perhaps, though, this is too obvious an example. Suppose I buy a house owned by an elderly lady who has lived there for 50 years. The house is not in poor condition, but the décor is not to my taste and it needs modernisation. I could do it up gradually, paying for improvements entirely from earned income. But I choose to front-load the upgrade by taking out a Home Improvement Loan. This is consumer credit that I would not have taken out if I had not bought the house. Because I borrow to do up the house, I provide employment to assorted tradesmen, revenue to the suppliers of kitchen & bathroom equipment and income to the staff on the tills at B&Q. And when I have finished decorating, I buy new carpets and furnishings, probably also on consumer credit. None of this would have happened if I had not bought the house. So although buying a house in good condition on the secondary market does not itself contribute to GDP, since the house was built long before I was born, the things I do after buying it to make it a place I like to live in do contribute to GDP. Is financing a secondary market house purchase of this type “unproductive”? I don’t think so.

In fact most people purchasing second-hand houses decorate and refurnish them, and most do so using consumer credit. The second-hand housing market gives considerable impetus to GDP through these consequential transactions.

And there is another side to this. What happens to the money I pay to buy the house?

In my first example, I pay a deposit up front, and my final payment when the house is completed and all snags resolved. The money goes to the builder, who pays down the loan he has taken out to fund the building of the house. So the money I borrow simply refinances the builder’s loan. Is this a contribution to GDP? No. It is the original builder’s loan that contributes to GDP. My subsequent mortgage does not, directly – though without people like me borrowing to buy houses, builders would quickly default on their loans, as Ireland’s banks discovered.

In my second example, I pay for the shell house up-front. The person I buy the shell from, hugely relieved to have got rid of the unproductive millstone round his neck, splashes out some of the money on a much-needed holiday in the Seychelles, and uses the rest to buy a brand new top-of-the range BMW. Does this contribute to GDP? Clearly yes, though the holiday mostly contributes to the GDP of the Seychelles and the BMW to the GDP of Germany. So my shell purchase is productive in more ways than one.

In my third example, the elderly lady is going into residential care, and the money raised from the sale of her house will go towards paying for her care. The sale of her house therefore funds employment in the care sector, which contributes to GDP.

But even if my elderly lady were only buying a retirement flat, the transaction would still contribute to GDP, since my house is worth more than her retirement flat and she can use the difference to top-up her consumption spending.

So secondary market purchases of property DO contribute to GDP, in lots of ways. In fact the refurbishment example is the most GDP-enhancing of these purchases, and the elderly lady example is arguably the most socially useful. Surely the lending to finance these should be regarded as "productive"?

All secondary market transactions are potentially GDP enhancing. This is because of their “pull” effect on primary markets. For example, consider someone who owns a 5-year-old BMW. He wants to buy a brand new car, but he needs to sell his current one in order to afford a new one. So he trades in his car. If there were no secondary market for cars he would be unable to do this: he would drive his BMW until it fell apart, rather than buying a new one every 5 years. True, car manufacturers might respond by cutting the prices of new cars to entice purchases, and they might run a scrappage scheme for cars older than 5 years: but could this really be called “productive”?

As a general rule, when there is no secondary market for long-dated assets, the issue of new assets in that class is limited by the availability of new entrants to the market and the expiry of existing assets. Secondary markets are essential to maintain liquidity: restricting finance for secondary markets actually diminishes, rather than increasing, primary market activity.

Ann Pettifor, there will be no shortage of money - Positive Money
Quantitative Easing and the Quantity Theory of Credit - Richard Werner
Co-op community marks 30 years of building a better life - Co-Op News

This post was prompted by a discussion on Twitter about what "lending for GDP transactions" really means in practice. It first  appeared as a guest post at RWER.