By Frances Coppola - September 27, 2015
When a former Bank of England deputy governor gives a presentation entitled "Are Low Interest Rates Natural?" to a extraordinarily high-powered audience of academics and monetary policymakers, you can bet he will come up with some great charts. Charlie Bean's historical analysis of long-term real and nominal yields in the UK is amazing: 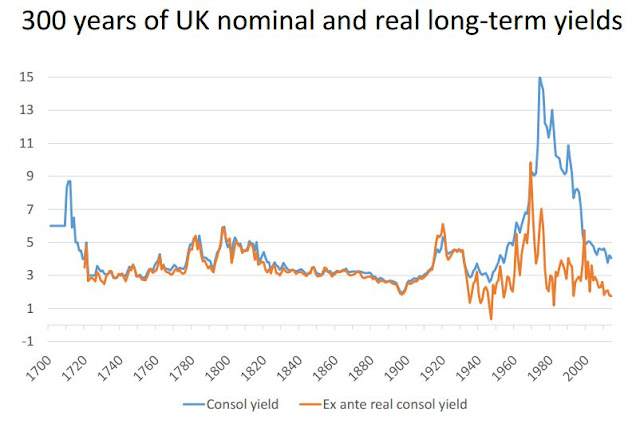 It is very evident that for most of the last 200 years, nominal and real consol yields have been pretty much pinned together. Charlie said that the gold standard prevented rates deviating by keeping the price level under control. But I am unconvinced by this.

Firstly, let's look at the historical record. In 1717, Isaac Newton, then Master of the Mint, changed from defining the value of the pound in silver as had traditionally been the case to defining it in gold. At that time, most banknotes were issued by commercial banks: the Bank of England issued notes in return for deposits, but for high denominations only and the amounts were variable. After the Bank Charter Act of 1844, which ended the issuance of banknotes by commercial banks in England and Wales (though not in Scotland or Northern Ireland), the Bank of England gradually moved to issuing notes for fixed amounts and lower denominations. But for much of the century, banknotes were issued in high denominations only and were not widely used, except in Scotland where a £1 note was popular (as it still is today). Most people used coins for everyday transactions, principally small-denomination silver coins. For all practical purposes, therefore, what Britain actually had during this time was bimetallism, rather than a gold standard as we would understand it now.

But no matter. War destroys gold standards, whether bimetallic or paper. Even though the gold standard only really applied to high-denomination bank notes, not the common currency used by the people of Britain, when Britain went to war with France in 1793, gold convertibility came under increased pressure as investors retreated into outright holdings of gold. The Bank of England eventually suspended gold convertibility in 1797 after a series of runs on the Bank threatened to drain its gold reserves. Convertibility was not restored until 1816 after the ending of hostilities with France.

And yet the fact that gold convertibility was abandoned for nearly twenty years barely creates a ripple on Charlie Bean's chart. Both nominal and real rates rose, but in parallel with each other.

It also isn't the case that prices were under control during this period. Inflation was very high - in 1800 it touched 36% - and volatile: 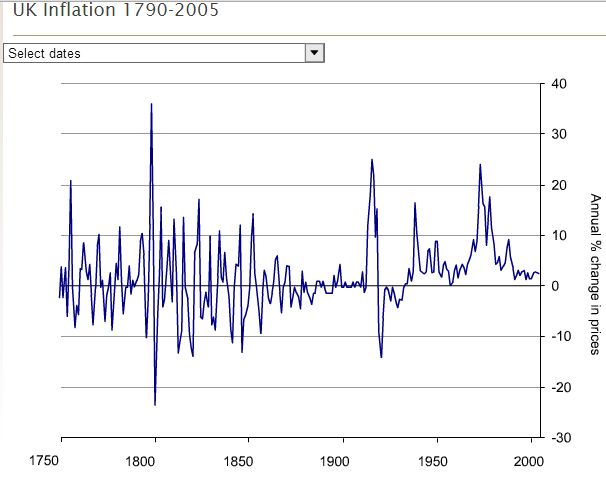 And the price level rose during this period: 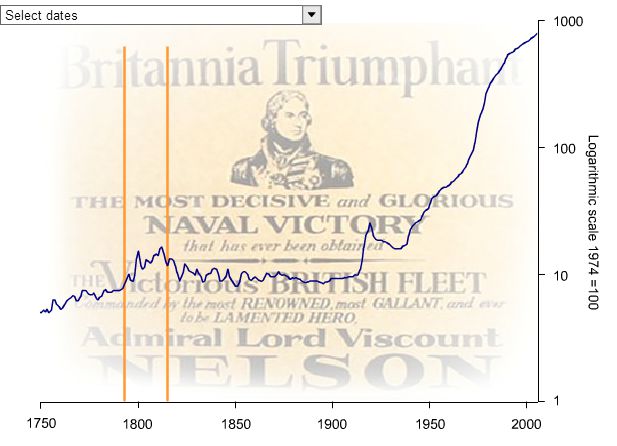 (both charts from the Bank of England)

Price level rises are common during and after wars because of supply-side destruction coupled with very high government spending: the price level rise during and after World War I is also very evident on this chart. The price level rise is sufficient to explain rising yields during the French Wars. But it doesn't explain why real and nominal yields didn't diverge during a period of high inflation and suspended gold convertibility. There must have been some strong nominal anchor keeping them pinned together. It certainly wasn't inflation targeting. Anyone hazard a guess as to what it was? I reckon it was a fixed exchange rate, but I could be wrong.

This is not just an idle question. The yield on consols (interest-bearing government perpetuals) is a proxy for the risk-free rate of interest. If nominal yields are persistently above real yields even in the absence of significant inflation, then something is massively askew in the pricing of risk-free assets. Today, inflation is hovering around zero, but Charlie's chart shows us that nominal yields are about two percentage points above real yields. I thought the post-crisis period was supposed to have euthanised rentiers? This chart suggests that they are doing better than ever.

Perhaps what this divergence tells us is that our expectations of future returns are persistently skewed to the upside. We therefore undervalue safe assets (hence high nominal yields) and overvalue risky ones. As Andy Harless says, safety is a scarce and valuable asset. Arguably, it should be a lot more expensive than it is. Perhaps we don't really think it is necessary - or we don't really think these assets are safe.

But why did everything change in the Depression? I don't buy the gold standard argument. Rather, I think that the cataclysmic shocks of the 20th century have weirdly distorted our view of financial reality. The fact is that a significant proportion of the human race now expect to receive returns on financial assets that are far removed from the real ability of the economy to generate them. I don't know why this is, but in my view we should be looking at things like labour market dynamics, longevity and pension expectations.

And we need to look at them as a matter of urgency. Such divergence between nominal and real rates suggests that there is a continual drain of resources from workers to rentiers, from young to old and from poor to rich. This shows itself as rising indebtedness among the young and poor, and increasing fragility of the global financial system. It cannot possibly be sustainable.

In his presentation, Charlie Bean reviewed an array of measures that might give central banks more control of nominal rates at the zero lower bound,such as raising the inflation target, negative rates and eliminating or charging interest on cash. But he concluded:

"It would be better to find ways of raising the natural rate through structural and fiscal policies."

Indeed, somehow we have to bring nominal and real rates back together. Ideally this would be through raising the natural rate. But I suspect the post-Depression natural (real) rate is lower than we would like it to be, and it's just taken us best part of a century to understand this. If so, then this is not simply a matter of getting fiscal and structural policies right. It raises serious questions about the ordering of society. After all, a large number of people depend on there being significantly positive real returns on essentially risk-free assets. If significantly positive real returns on risk-free assets are a thing of the past, we owe it to those people to stop pretending we can restore their lost returns through "confidence-boosting fiscal adjustment" and "growth-friendly structural reforms". They simply aren't going to be able to live comfortably in their old age on the interest on risk-free savings.

The truth is we do not know when, or if, positive real returns on risk-free assets will return. If the future path for growth in future is low to zero, then they may never return. If this is the case, then the solution to the "Great Divergence" must be for nominal risk-free rates to drop. Permanently.

Weird is normal - Pieria
No, you can't have your risk-free returns back - Tomas Hirst, FT Alphaville