By Frances Coppola - September 21, 2014
I've just been listening with increasing annoyance to Angela Eagle, deputy leader of the Labour Party, speaking on devolution. She wants to drive down devolution "to the regions and to our major cities". This would of course only apply to England. Scotland already has its own Parliament and Wales and Northern Ireland have Assemblies: further devolution would give these country-level governments more power to manage their own affairs. But if the Labour Party get their way, England will be denied this. England, the largest country in the "group of four" that is the United Kingdom, would be the only country with no government of its own.

England is not just a name, and it certainly isn't just a "collection of regions". I get a little tired of people (mostly Americans, or Celts with chips on their shoulders) telling me that England has no culture and no history except an inglorious one as a failed colonial power. England has well over a thousand years of history as a unified nation: it is one of the most ancient nations of Europe, far older than Germany or Italy. We were all taught at school how Alfred the Great, in the eighth century CE, unified the warring Saxon clans. And although England was subsequently divided after the invasion of the Danes, that split was short-lived and England was reunified even before the invasion of the Normans in 1066 and the establishment of the Plantagenet dynasty. There were some nasty civil wars after that - the standoff between Empress Matilda and King Stephen, and the Plantagenet family dispute known as the "Wars of the Roses". But these never challenged the existence of a country called "England". The argument was always over who should run it.

Yet now, it seems, the Labour party wants to eliminate England. This is understandable: as this map shows, England is overwhelmingly Conservative, and the Labour party would struggle to gain any presence at all in an English parliament: 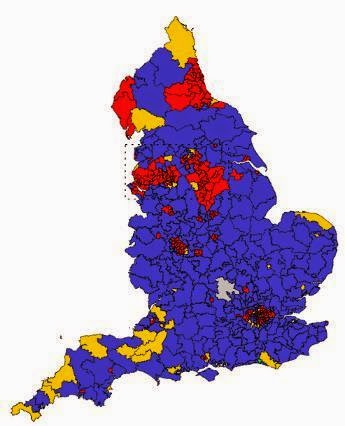 
But the Conservatives have similar problems in Scotland and Wales: they struggle to win any Westminster seats in either country and are in a tiny minority in both the Scottish parliament and the Welsh assembly. Is this a reason for breaking these countries up? Surely not. Neither, therefore, are the Labour party's problems in England a reason to break up an ancient nation.

Calls for England to be regionalised along the lines of historic kingdoms such as Cornwall and Northumbria, or the old Saxon/Viking territories of Wessex, Mercia and so on, are understandable, as is the call for great cities such as London and Manchester to run their own affairs. I don't have a problem with any of this. Devolution to regional and city level WITHIN England is sensible, though it could go too far: regionalising the NHS, for example, would be bonkers, since it would be bound to result in very variable standards of care across the country - already the case to some extent because of the budgetary problems of some NHS Trusts.  But I don't see  regional/city devolution within England as an alternative to the creation of an English parliament. I see it as a decision that an English parliament should be empowered to make. Westminster's job is to create and empower the English parliament, not meddle with the governance of English regions.

The main objection to an English parliament seems to be the dominance of England at Westminster. This is of course an existing problem, which would become even worse with further devolution to Scotland and Wales. Some people want England regionalised so that there is parity of population among areas represented in what is inevitably going to become a federal parliament. But this is absurd. Scotland has twice the population of Wales, and both have higher populations than Northern Ireland: is anyone suggesting these, too, should be broken up so that Northern Ireland is adequately represented? No, they are not. The integrity of all three of these national governments is to be preserved despite the population imbalances. So it should be with England, too.

It is not England that should be broken up to create a UK federal model of governance. It is Westminster. I think the UK should become a federation of four nations, each with their own elected government, with a separate directly elected federal government. Westminster must undergo radical surgery: the number of MPs must be slashed, and it must become properly representative of the people of the UK. Reforming Westminster would involve regionalisation of the whole UK - not just England - along similar lines to the EU parliament. But the principal of subsidiarity should also apply: Westminster's powers should be limited to those matters that the four countries agree are best handled at federal level.

But I fear the changes to Westminster that this would involve are so great that political vested interests will ensure it never happens. The Labour party's stance is determined only by its worries about losing the 2015 election, while the Conservatives are clearly seeing the "English question" as an opportunity to shaft Labour and get back at the SNP. It's shabby, frankly.

The people of the UK deserve better. We need a proper debate about how we wish to be governed, rather than a package of ill-thought-out measures rushed through ahead of a general election.
devolution England UK