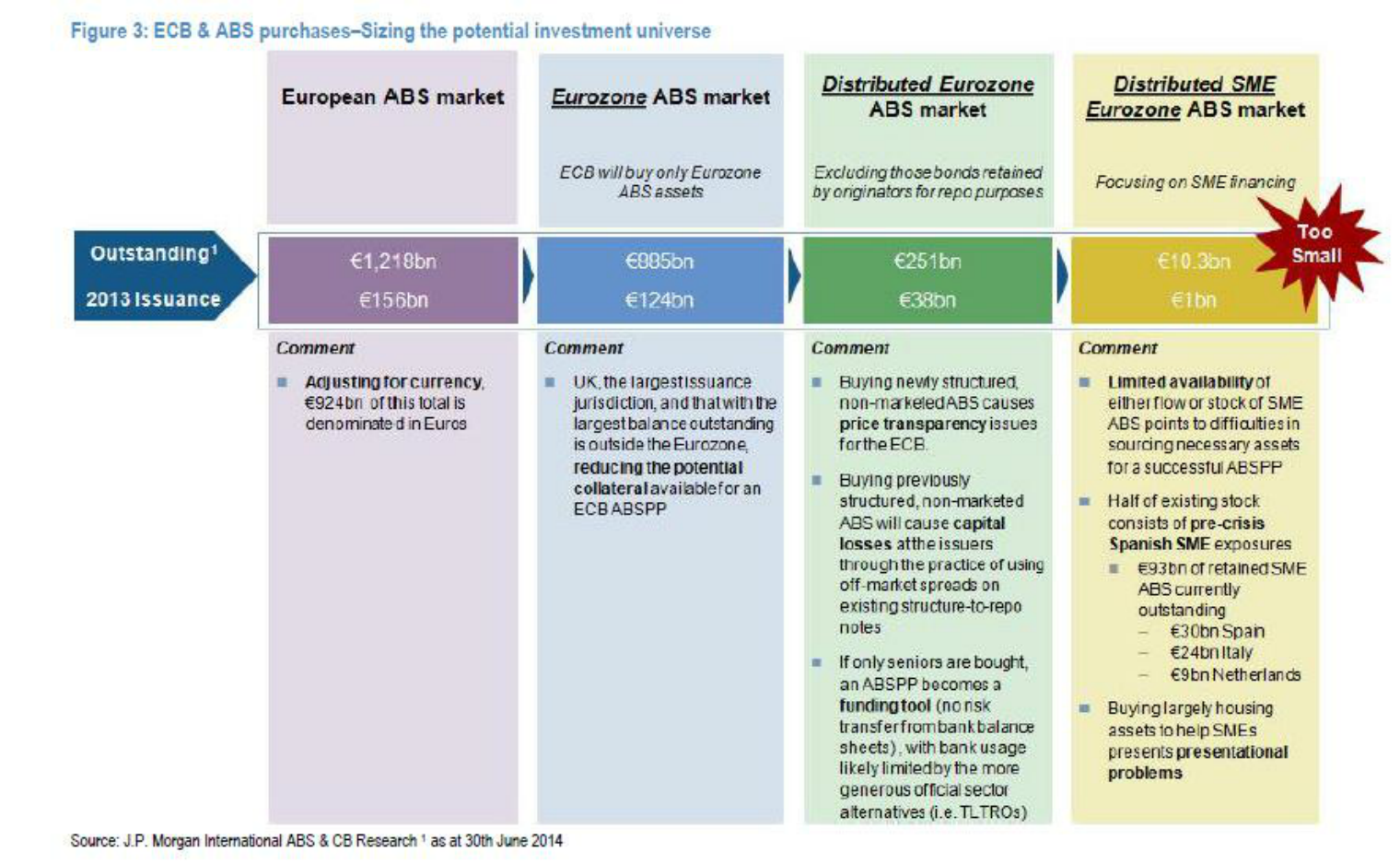 What it says, essentially, is that although the total amount of Euro SME loans currently in issue looks sizeable, by the time you have removed all the loans that would be ineligible for securitisation and purchase by the ECB for one reason or another, there is not much left. Securitising and purchasing 10.3bn Euros worth of SME loans is not going to make a great deal of difference to the distressed periphery.

So the idea must be that the presence of the ECB in the SME ABS market would spur loan issuance. To make a significant difference to credit conditions in the periphery and repair the broken monetary policy transmission mechanism, that loan issuance would have to be simply huge and concentrated in periphery countries. There are several problems with this, to my mind.

If the underlying problem is borrower creditworthiness, then it is difficult to see how the SME ABS programme could generate the huge additional loan issuance required to kickstart growth, even with ECB purchases. Unless.....we saw in the US that demand for ABS could encourage lenders with no "skin in the game" to reduce lending standards and even indulge in outright fraud to increase the volume of loans for securitisation. Although the ECB says it is planning to limit purchases to the highest quality SME loans, how would it ensure that this was the case in practice, especially if there turned out to be not very many high-quality SME borrowers in the periphery? I'm sure Blackrock, which is advising the ECB on the design of this scheme, won't have forgotten about the problems in the US - but is it familiar enough with the very different European marketplace to avoid creating opportunities for fraud and sharp practice?

It's also worth remembering that mortgage-backed securities in the US were first created by the GSEs (the first was issued by Ginnie Mae) and were originally designed to be packages of prime mortgages only. Including subprime in the mix was a later development intended to raise returns on junior tranches. If the Eurozone's SME ABS are to be tranched, presumably the ECB would only buy senior tranches - in which wouldn't there potentially be a similar temptation to include poorer-quality loans in the mix to improve the returns to private sector investors?

And what about the regulators? The Eurozone does not have full banking union: supervision particularly of smaller lenders remains at national level. One of the problems in the US was the fragmentation of the regulatory infrastructure - and a fragmented regulatory infrastructure is exactly what there is in the Eurozone, too. National regulators could be under pressure to cut corners from governments anxious to kickstart growth, and from lenders and securitisers anxious to prove they are doing their bit (and improving profitability). Tight regulations are useless if the institutions are too weak or too captive to enforce them. The flawed institutional design of the Eurozone is itself a serious risk to this programme.

So as far as I can see, the SME ABS programme is either going to be too small to make much difference, or is likely to encounter serious problems with loan quality at some point, putting the ECB's balance sheet at risk. I'm particularly worried by the way in which SME ABS purchases by the ECB is being promoted in some quarters as the primary means of "fixing" the periphery (though Draghi himself does not make this mistake). If only we can get credit flowing to periphery SMEs, the thinking goes, all our troubles will be over. This is simply not true. SME ABS purchases cannot substitute for flawed institutions and inadequate fiscal and monetary support. And even more importantly, they cannot compensate for a lack of creditworthy borrowers.

Central support for hard-pressed SMEs in the periphery would probably help to repair those economies. But the ABS issuance and purchase programme alone will not be enough. In the absence of other measures, reliance on such a programme would simply create moral hazard for lenders, securitisers and regulators.
ECB Eurozone securitisation SMEs