There's more than one kind of money demand

By Frances Coppola - June 08, 2014
We are used to money demand diagrams that look like this:

In this sort of model we talk about investors being willing to "hold" money in preference to other assets. This is, of course, stock thinking. It says nothing at all about the flow of money. Indeed in the quantity of money equation MV = PY, V (the velocity of money) is often assumed to be constant. Yet we know that the velocity of money reduces as economic activity slows, and increasing the stock of money does not necessarily increase its velocity. Indeed, it could be argued that providing investors with all the money they want to hold itself tends to slow velocity. If money is hoarded, it is not spent - and it is spending that increases the velocity of money.

As borrowers usually spend the money they borrow, borrowing tends to increase the velocity of money. So we might expect that a falling interest rate would encourage borrowers to borrow more, thus increasing the velocity of money and offsetting the stagnating effect of investors hoarding money. Increasing the stock of money reduces the interest rate, encouraging borrowing and helping to maintain money velocity.

If only it worked like that in reality. The problem is that falling interest rates on alternative assets for investors don't necessarily translate into falling discount rates on loan assets supplied by borrowers. Changes in borrower creditworthiness - whether real or perceived - mean that banks and markets may offer far higher discount rates than borrowers are prepared to accept. Even if banks and markets maintain low discount rates, borrowers themselves may be less willing or able to offer loan assets at those rates, because of falling net worth and/or falling real incomes.

So in a debt-deflationary slump, not only do investors hoard money, reducing the amount of money in circulation and slowing its velocity: borrowing reduces too, and the supply of money falls (because banks create money when they lend). Rather than money hoarding by investors being offset by increased spending by borrowers, the two combine to depress not only the amount of money in circulation but also its velocity. The fall in money velocity in the US since 2008 is staggering: 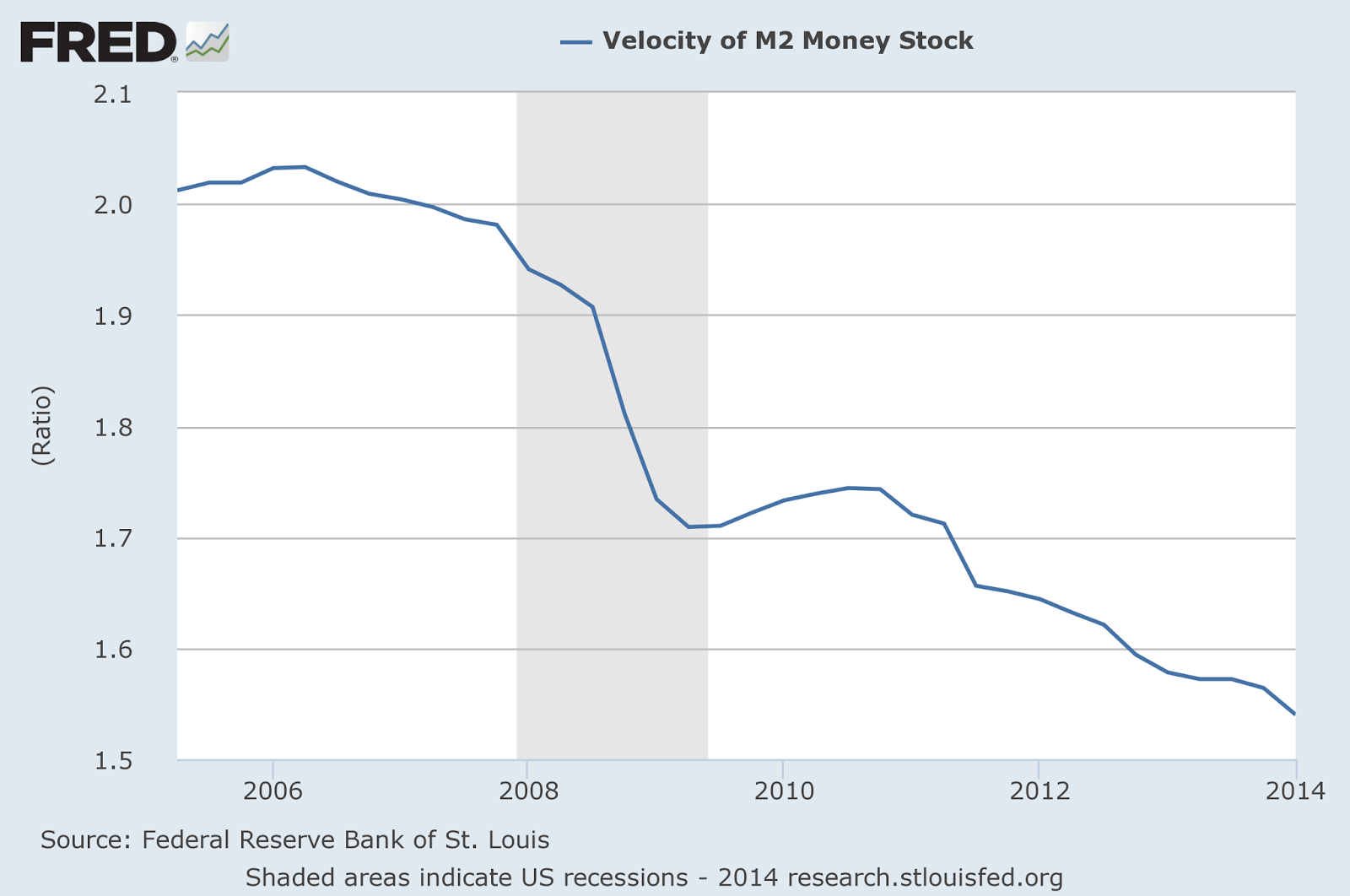 Efforts by monetary authorities to raise the velocity of money tend to focus almost entirely on reducing interest rates to investors and increasing their stocks of money in the hope that this will encourage them to spend. But this only addresses one side of the problem. While banks - encouraged by regulators - continue to demand high discount rates on loan assets, and households and corporations continue to offer much lower rates (if they offer them at all), borrowing will remain depressed, the money supply will be smaller than it should be and the velocity of money will be on the floor.

Belatedly, monetary authorities are beginning to understand that reducing policy rates and flooding banks and markets with money isn't sufficient. Unless money reaches those households and corporations whose ability to supply loan assets has been impaired, the velocity of money does not recover and the economy remains stagnant.

Governments have exhorted, cajoled, bribed and kicked banks to try to make them lend, but the reality is that damaged banks under pressure from regulators to repair their balance sheets only want to lend money to people who don't need it, not those who do. The much-maligned Help to Buy scheme is at least an attempt to reduce the very high discount rates faced by certain kinds of borrower. And it does work: there is increased activity in the housing market across the whole of the UK, not just in London and the South East where inflows of foreign money are pumping up prices. The trouble is that it also pushes up house prices, making the UK's housing affordability problem worse.

The UK's Funding for Lending scheme was less effective because it provided banks with cheap money rather than improving the creditworthiness of borrowers. Banks used the money mainly to refinance existing portfolios and offer lower interest rates to people they would have lent to anyway. But despite this less than encouraging response,the ECB has now joined the Funding for Lending party with its Targeted LTROs. It is hard to see that these will make much difference to the credit bifurcation in the Eurozone: 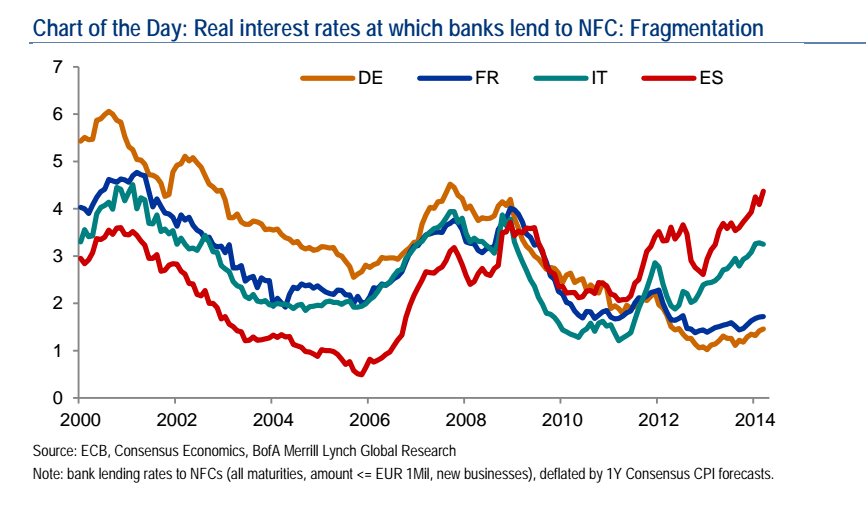 Real discount rates on loan assets in Italy and Spain are far higher than those in France or Germany, partly because of lower inflation but partly also because of higher perceived risk. As the Italian and Spanish sovereigns themselves are perceived as higher risk than Germany or France, sovereign loan guarantees are likely to be of limited effectiveness. Some form of ECB guarantee for SME lending in those countries seems likely to be necessary if the ECB is serious about ending credit bifurcation.

But government or central bank guarantees for the loan assets of high-risk borrowers won't be enough to end the deep-rooted depression in the Eurozone. Renewed spending does not have to come solely from bank borrowing. It can also come from higher wages, lower taxes, more benefits, increased government capital investment. All of these are impaired in the Eurozone. Because of ridiculous political restrictions, Eurozone sovereigns cannot borrow to invest in their economies even though yields on sovereign bonds are historically low and falling rapidly. They cannot put together a New Deal to support the people and businesses that are being hurt by this depression.  They cannot reflate their economies with helicopter drops to businesses and households, bypassing damaged banks. Nor can they write down excessive debts. Even increasing the money stock to meet investor demand is politically suspect, because it involves buying other assets. Just about everything that might help appears to be verboten.

If the overriding need is to get the economy out of a slump, does it really matter how the money is provided, provided it gets to people who will spend it rather than sitting on it? I speak here of the Eurozone, because it is by far the worst offender: if present political restrictions remain, this depression will never end. But in reality no country has paid enough attention to repairing the net worth of borrowers and improving their incomes so that they can start spending again. And because of this, recovery from the financial crisis has taken far longer and been far more painful than it needed to be.

As Willem Buiter says, debt-deflation driven stagnation is a policy choice. It doesn't have to be like this.

Sacred cows and the demand for loans

Draghi's Latest Announcement is a Big Nothing - Capitalism and Freedom

Can labour markets be too flexible? - Pieria