Of interest rates and deficits

By Frances Coppola - June 29, 2014
(I was tempted to call this post "Sumner's Here" but thought that might be a bit too FT Alphaville.)

Recently, the American economist Scott Sumner visited the UK, among other things giving a presentation at the Adam Smith Institute and interviews on the BBC's Today programme and Newsnight. Sadly I missed these events, but fortunately he has written about what he saw.

He notes that all the talk in the UK is about raising interest rates. Indeed it is, and I am one of a rapidly diminishing number of voices who urge caution: premature interest rate rises in a fragile economy with high levels of household indebtedness could kill off the nascent recovery. The UK economy needs to be strong enough to support reduction in the fiscal deficit before interest rates start to rise. On this, Sumner and I seem to be in agreement:


Since 2008, the UK has run extremely large budget deficits, bigger than the US as a share of GDP. Everyone agrees these are too large, and need to be reduced. But Keynesians have argued that austerity should be very gradual, to avoid derailing the recovery. That’s a fair argument (although I have doubts due to monetary offset), but the implication is that if the recovery ever becomes so strong that you need to raise rates, then clearly the first place to tighten is fiscal policy, and policymakers should only raise rates when the budget deficit has returned to the optimal level based on the classical principles of public finance.  Britain is obviously far from that point.

But sadly that's where the agreement ends. Quite apart from the fact that not everyone agrees that the UK's fiscal deficit is too large, I think it is very evident that loose monetary policy cannot offset fiscal austerity. Admittedly, the combination of tight monetary policy with fiscal austerity - as in the Eurozone - is far worse, but most economists agree that the UK's fiscal austerity in 2010-12 did derail its recovery despite the Bank of England's monetary offset. The reason for this is likely to be the regressive nature of QE and fiscal austerity, both of which disproportionately affect poorer people - who are also those with the highest marginal propensity to consume. Supporting asset prices for the rich does not have the same effect on AD as increasing benefits and cutting taxes for the poor. The UK government has now started to do the last of these, and lo! there is recovery. What a pity it took three years for them to realise that monetary and fiscal policies need to complement each other rather than being antagonistic.

Sumner argues that tightening should start on the fiscal side, not the monetary side. As I've said, I don't disagree with this. Where I disagree, though, is in his notion that the UK government should introduce further austerity to reduce the fiscal deficit, and failing that, that interest rates should rise sooner rather than later:


Given the refusal of fiscal policymakers to speed up the austerity process, the BoE may need to raise rates in 6 months to a year.  That’s monetary offset, and it is quite appropriate.  The real problem in Britain is government spending, which is still too high.  (Or if you are a left-winger, the real problem is that taxes are too low.)

The fiscal deficit is usually quoted as a percentage of gdp. Currently, the UK's fiscal deficit is about 5.8% of gdp, well above the Maastricht treaty limit of 3% of gdp. Not that the EU is about to put the UK in a fiscal vice: the UK has only ever promised to "endeavour" to keep within Maastricht limits, and it famously refused to sign the fiscal compact. The EU has no means of applying fiscal sanctions to the semi-detached UK without causing further diplomatic problems. And despite all the rhetoric, the EU does not wish to lose the UK. Despite the UK's excessive deficit, the tone of the European Semester review of the UK's finances was decidedly gentle. The UK is under no EU pressure to speed up deficit reduction.

If gdp increases, the fiscal deficit/gdp ratio falls without any cuts in public spending. But the absolute fiscal deficit in a recovering economy should also fall naturally. This is because of increased tax revenues due to the nominal gdp increase, coupled with reduced benefit claims as more people enter work and wages start to rise. The ONS reports that the UK's fiscal deficit is indeed falling, though at a glacial pace: the public sector net borrowing requirement for May 2014 was £8.1bn lower than in May 2013 (yes, I know, that's tiny - a fall of less than 1%).

Once the recovery is well established, the Keynesians that Sumner criticises would agree that spending cuts and tax rises may be appropriate to restore budget balance. But is the UK recovery well established? There are differing views on this. Some say it is all smoke and mirrors engineered by direct support to the housing market from a Chancellor determined to win next year's election. Others say it is real, but very early days yet. For me, the recovery is good in parts: there does seem to be more energy in the economy, and improving employment figures are welcome, but the external deficit (which for me is a much more important indicator than the fiscal deficit) is too large - mainly because half the UK's exports go to the depressed Eurozone - and wages are stagnant.

This last is in my view the principal reason why the fiscal deficit is not falling as much as might be expected from reasonably strong nominal gdp growth. Government receipts are very disappointing for a recovering economy: 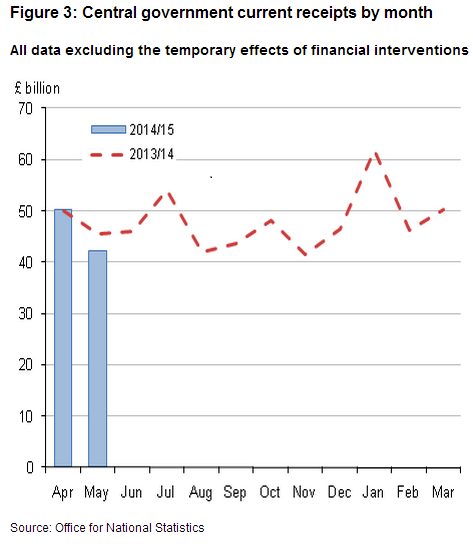 If this recovery were well established we should be expecting higher receipts. There may be any number of reasons why receipts are disappointing, but flat wage growth seems a likely culprit to me. ONS reports that tax receipts in May 2014 were up 0.4% year-on-year for Income and Wealth, which is actually a real fall in government revenue and substantially below increases in other categories, notably VAT (up 4.9%) and stamp duty on property transactions (up an astonishing 28.2%). These tax receipt figures suggest that this recovery is driven primarily by the housing market and, to a lesser extent, by consumer spending, neither of which is matched by an increase in nominal incomes. I haven't looked up the debt figures, but it is obvious that both consumer and mortgage debt must be rising. Unless nominal incomes start to rise and/or the external deficit starts to fall, this recovery cannot possibly be sustainable. Fiscal austerity at the moment would be madness - and so would interest rate rises.

So I can't agree with those who would like to see interest rates rise soon. And I can't agree with Sumner about increasing fiscal austerity, either. Doing nothing seems a good strategy to me. Impatience is a bad characteristic in both politicians and economists.