How a Danish king ruined some hopeful research

This may come as something of a surprise to those who are used to looking at charts like this: 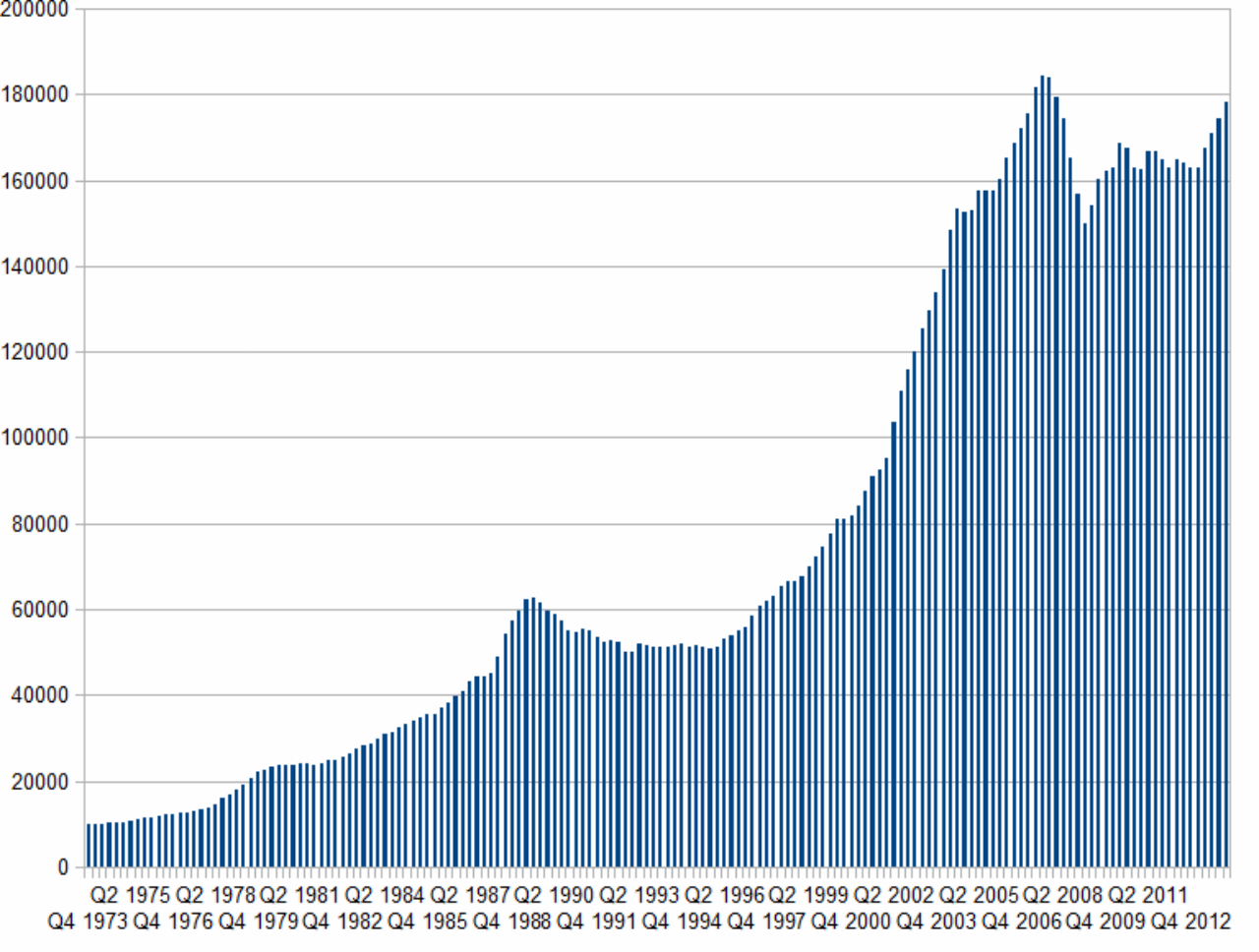 This chart shows the rise in average UK house prices since 1973 (source: Nationwide). There is clearly a steep rise in prices from 1995 to the crash in Q4 2007, which dwarfs the previous housing boom and bust in 1987-8. Many people would regard such a dramatic rise and fall as evidence of a bubble.

But the VoxEU authors don't think it is. And they base their argument on a unique feature* of the UK housing market - the existence of very long-term leases as well as freeholds.

Typically, in the UK housing market, houses are freehold and apartments leasehold, though this is not universally the case. A lease is a right to use a property for a period of time. In effect, it is a time-limited, pre-paid form of ownership. Properties that have leases close to expiry decline in value rapidly, making them difficult to sell, so most leases are automatically renewed. So that leases don't have to be renewed very often, many are very long-term - up to 999 years.

As the authors explain, such a long lease means that there should be no difference in value at its expiry from that of a freehold property. Both, at current prices, should be zero:


....the leaseholder owns the property for 999 years. The freeholder owns the property not only for the first 999 years, but also for all periods after that date. Therefore, the difference in the price of the freehold and the leasehold reveals the value today of owning the property 999 years from now. Ownership of a house 999 years from now is essentially a claim to the bubble asset. It entitles the owner to a single payment (the value of the house) in 999 years. This is so far in the future that it should have no value today, even if discounted at extremely low rates (say 1% per year).

They then go on to show that there is indeed no difference in price between properties with leases of 700 to 1,000 years and freehold properties. And they conclude:


We find that extremely long leaseholds are valued identically to otherwise similar freeholds. Our results, therefore, show no evidence for infinitely-lived bubbles in these markets. We find this to be true even in geographic regions where people argued that housing bubbles were likely to be present (e.g., Prime Central London).....the price discount is small and not statistically different from zero...in every year since 1995. In particular, we find no evidence of infinitely-lived bubbles even during the house price boom that culminated in 2007.

This is simply absurd. It is impossible to predict what will happen at the expiry of a 999-year lease. The property may not even exist any more, and nor might the laws that govern the lease. Just to put things in context, 999 years before the present date was the year 1015. That was prior to the signing of Magna Carta, which is the foundation of all present UK law. It was prior to the Norman Conquest. It was prior to the building of most of the surviving castles and cathedrals in the UK, let alone the houses. It was, in fact, during the Danish occupation of England, and the reigning king was Aethelred the Unready (he died the following year). If there was a system of law in England at that time, it was - presumably - Danish. Would documentation for a lease issued under Danish law in 1015 AD even exist today, let alone be recognised as legally binding? Who would own the lease, anyway? We don't have many Danish thegns left in the UK now.

For all practical purposes, a 999-year lease is indistinguishable from a freehold. The only reason for having leases of such length at all is that lessees don't have quite the same rights and responsibilities as freeholders: they usually pay "ground rent" to the lessor, who remains responsible for maintaining the fabric of the building and communal areas. The fact that the authors could show no significant price difference between long-lease properties and freeholds demonstrates that the pricing of ground rents is generally efficient and fair. But it says absolutely nothing at all about the existence or otherwise of bubbles in the pricing of freehold properties. We are, in short, no further forward.

Personally I am of the opinion that there was a bubble in house prices from 1995-2007, which only partly burst. It was initially prevented from deflating fully because of severe supply restrictions and the collapse of the construction industry, and further deflation is now actively being prevented by government and central bank intervention.

The chart above suggests that there is no new housing bubble, not even in London: the fact that house prices remain elevated is simply unfinished business from the 2007-8 crash. But houses remain significantly overvalued relative to incomes. Either incomes must rise significantly, or house prices must fall. The question is how this can be achieved without trashing the economy. I admit, I do not have an answer. There is no simple solution.

The British obsession with property - Pieria


* Well, not quite unique. Singapore has these too.