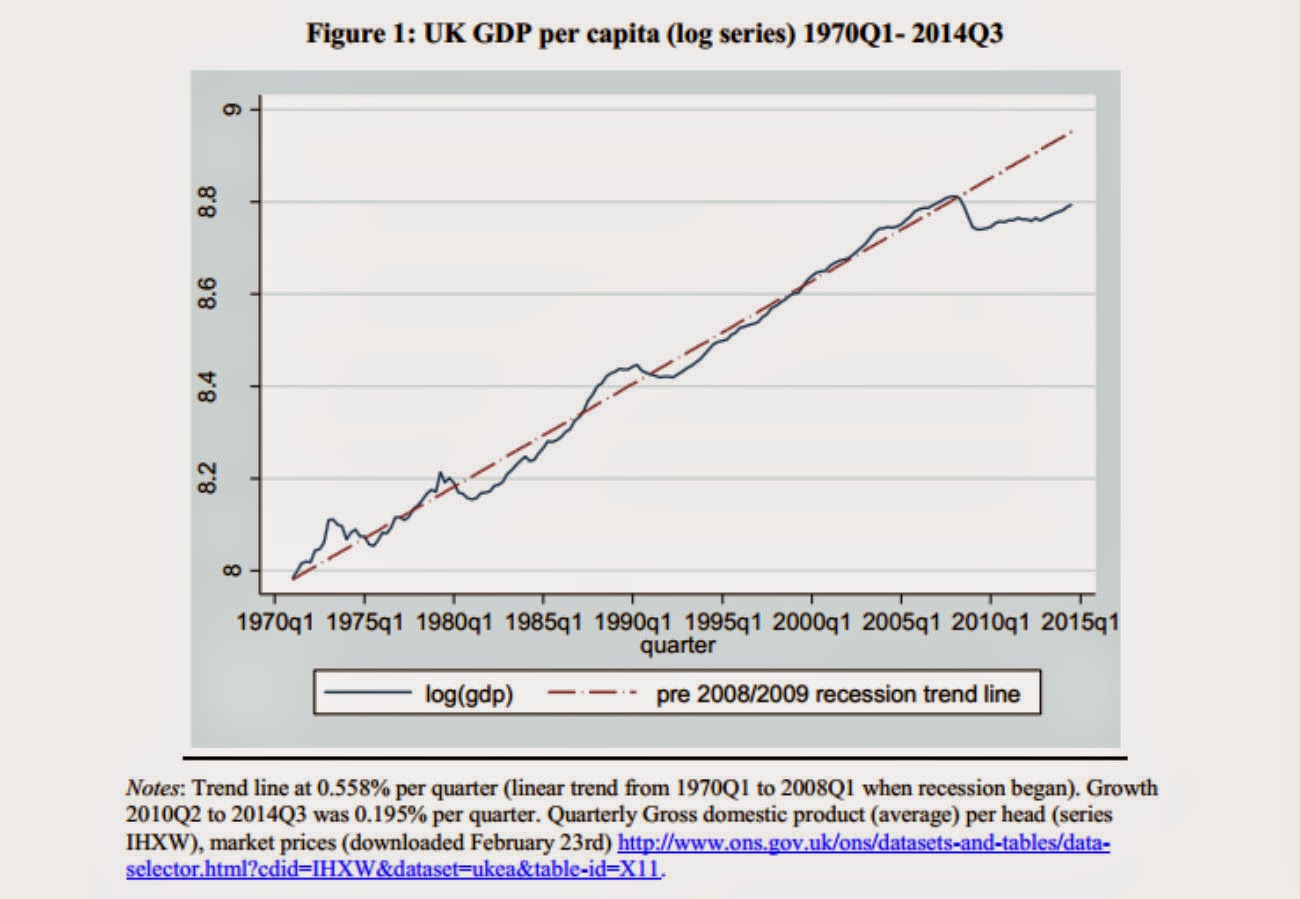 This chart deserves to be seen by every adult in the UK. It charts all too clearly the true cost to them of the financial crisis and its aftermath.

It is clear that the financial crisis was severe. The sharp drop in GDP per capita in 2008 is unprecedented since 1970. That was bad enough. But what is far worse is the evidence that the UK still has not recovered. Even with recent encouraging growth, GDP per capita remains far below its long-term trend. Those who argue that the financial crisis simply eradicated debt-fuelled "bubble" income are clearly wrong, unless they think the whole of the last 45 years was a bubble.

So what exactly has caused this awful fall in per capita income? Was it due to Coalition policy, as some think, or were there other causes?

In the report from which this chart comes (pdf), John offers a balanced explanation:


The failure to recover lost output shown in Figure 1 cannot be attributed to UK austerity only. The eurozone crisis, the lingering effects of the banking crisis, higher commodity prices, and the decline of high productivity sectors like oil and gas should also be apportioned some part of the blame (Corry et al, 2012, offer an assessment).

But what is striking is how much worse the UK performed during the first half of this Parliament when austerity bit hardest. Between 2010 and 2013, GDP per capita growth was worse than in the United States and Japan, both of which had independent currencies like the UK. UK performance was similar to the countries in the eurozone hit by even more severe austerity and a currency crisis.

So although the UK was hit by severe secondary shocks, the fiscal policy pursued by the Coalition government in its first three years contributed to the UK's poor recovery. The OBR estimates that Coalition fiscal consolidation cut GDP growth by 2% in 2010-12. John suggests the real figure may be higher because the OBR uses conservative multipliers and ignores hysteresis effects.

Using data from the OBR, John shows that in 2010-12, the UK's deficit reduction actually proceeded faster than planned:

But despite this front-loaded consolidation, the Coalition's intention of eliminating the current budget deficit by the end of this Parliament has not been achieved. John says that this is because the austerity programme has tailed off since 2013: in the current financial year there has been no fiscal austerity at all. Funny, that. As the election approaches, austerity diminishes.....

So having failed to deliver on their original mandate, the Conservatives now plan to repeat the whole exercise again. Severe austerity in the first three years of the next government (assuming they win the election), followed by relaxation in the last two years. The economic effect would be similar:


Explicit macroeconomic modelling of the impact of alternative paths of fiscal consolidation suggests that by 2019-20 output, employment and debt would be a bit higher under Labour and Liberal Democrat plans compared with the Conservatives (Kirby, 2015).

I find it odd that the opposition parties are not shouting about the negative prospects for employment and per capita incomes in the short term that Conservative plans imply.

But the really scary part of all of this is the effect on investment. The Coalition government has achieved the majority of its deficit reduction by means of sharp cuts to investment: as the chart shows, public sector net investment has fallen from 3.3% of GDP before it came to power to 1.4% in the current financial year. The Autumn Statement committed the Conservatives to achieving an overall budget surplus by 2019-20, achieved through spending cuts alone. John points out that this leaves little room for investment:

How is the "long- economic plan" going to create long-term economic prosperity if it includes little or no long-term investment in infrastructure, human capital and innovation?

Sadly, it seems increasingly unlikely that the public will hold the Conservatives to account for their part in the UK's poor economic performance in recent years. It seems unfair that the Conservatives can claim to have generated a recovery that they actually did their level best to prevent, but people have short memories. Recent fiscal relaxation coupled with giveaways for key voter groups has created a "feel-good factor": people whose real incomes are rising now after years of falls don't notice that they still are poorer than they were in 2007.

In the interests of balance, however, I should point out that Labour and the Liberal Democrats also plan further austerity after the election. The parties really only differ over the pace of consolidation and the means by which deficit reduction would be achieved. Whichever party wins, the next few years will be tough.