By Frances Coppola - March 11, 2015
Professor Hausmann has responded again to my reply to his reply to my criticisms of his Project Syndicate post. It is a very gracious response.

We are substantially in agreement on the three points that I raised in my previous post: the long-standing nature of Greece's fiscal fragility, the illusory GDP growth fuelled by the pre-crisis debt bubble that obscured the deterioration in Greece's financial position, and - above all - the long-term decline of Greece's competitiveness. And oddly enough, this means that we are also in agreement about the current situation in Greece, though we frame it differently. Professor Hausmann says that austerity is not the problem. I say that Greece's fiscal finances are not the problem. We are really saying the same thing. The real problem is competitiveness.

Greece's problem has been competitiveness for a very long time. It has run a large and persistent trade deficit for the last half-century (blue dotted line): 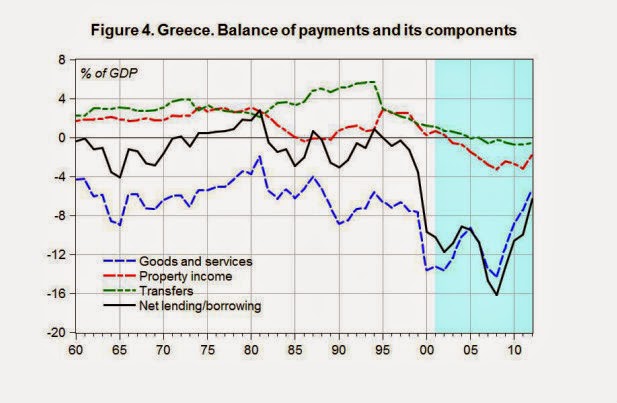 Exactly why Greece's competitiveness has been so poor for so long is unclear. Tomas Hirst attempts to explain it in terms of oil shocks and politics, which I think is partly true. But I also think there are other factors at play, notably the ageing of Greece's population, the unusually high number of small and micro businesses in the Greek economy, and the influx of cheaper labour into Western markets after the fall of the Iron Curtain. I shall have a look at this in another post.

However, there is a widespread perception that Greece's problems are primarily due to fiscal profligacy and excessive public sector debt. The story goes that out-of-control government spending caused the deficit and debt to rise to the point where markets refused to fund it any more, causing a "sudden stop". The primary focus of the EU & IMF adjustment programme so far has been on eliminating Greece's fiscal deficit and reducing debt/gdp in the hopes of preventing a further fiscal crisis: growth was supposed to return once confidence had been restored through successful fiscal adjustment. The fiscal deficit has indeed been more-or-less eliminated. But there is no sign either of improved confidence or much in the way of growth. And the aim of reducing debt/gdp has been thwarted by Greece's deep and persistent recession. Greece is therefore still under pressure to make further improvements to its fiscal finances.

Professor Hausmann does not think that Greece's debt overhang is such a big deal:


But the truth is that the recession in Greece has little to do with an excessive debt burden. Until 2014, the country did not pay, in net terms, a single euro in interest: it borrowed enough from official sources at subsidized rates to pay 100% of its interest bill and then some. This situation supposedly changed a bit in 2014, the first year that the country made a small contribution to its interest bill, having run a primary surplus of barely 0.8% of GDP (or 0.5% of its debt of 170% of GDP).

Philippe Legrain, in a comment on Tyler Cowen's blog, disagrees:


It is fair enough to point out that Greece was living well beyond its means until 2009, and that its productive structure needs upgrading. That inevitably implies a painful adjustment. But the pain has been unnecessarily great - a cumulative loss of more than 100% of GDP over the past five years - because Greece has laboured under unpayable debts, with most of the 'generous' EU loans used to pay private-sector creditors (notably, German and French banks) who should have taken a big hit in 2010. Had Greece's debts been restructured in 2010, austerity would have been less brutal, the private-sector recovery swifter and the slump less deep than they have been. Even now, Greece's massive debt overhang - and the uncertainty about Grexit and the chill to investment that this creates - is a huge obstacle to recovery 'whatever reforms' Greece does.

How can we reconcile these two views?

Philippe is absolutely correct that Greece's debt overhang seriously impedes recovery, But it is not just public sector debt. The real problem is that both the public AND private sectors are over-indebted. This chart shows how the private sector balance shifted from surplus to deficit in the late 1990s: 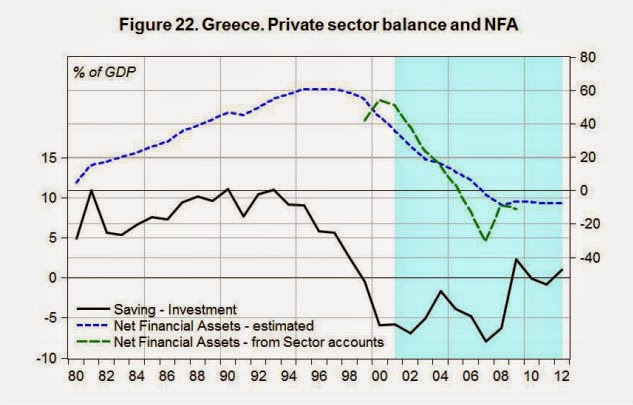 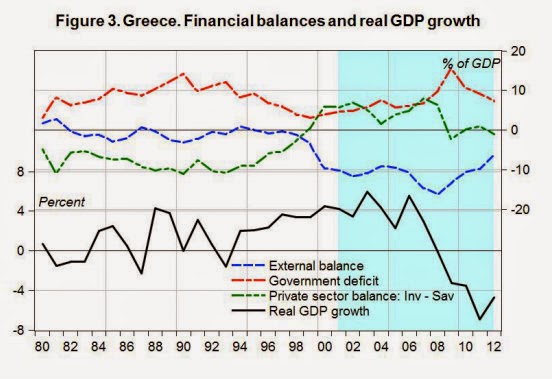 As can be seen from this chart, the private sector's debt-financed investment boom came to an abrupt end in 2008-9 when the capital inflows reversed. The external deficit reduced, the private sector deficit disappeared completely, the government deficit ballooned and real GDP fell off a cliff.

So the story of the Greek crisis is not really one of fiscal profligacy resulting in a "sudden stop". It is one of PRIVATE sector profligacy fuelled by rising external debt, itself resulting from (or caused by) falling competitiveness. As happened to so many countries in 2008, the banking crisis forced private sector debts on to the public sector balance sheet.

The difference between Greece and other Eurozone countries is that when it was forced to socialise private sector losses, it already had legacy debt of 100% of GDP. The fact that debt/GDP had been that high since 1993 was not the point. Seeing Greece's debt/gdp soaring, frightened by papers such as this from Reinhart & Rogoff suggesting that high debt/gdp was economically disastrous and angered by the disclosure that Greece's fiscal position was far worse than they had been led to believe, investors ran for the hills, causing Greece's borrowing costs to spike and creating a real risk of default. Their behaviour brought about the very situation that they feared.

The often-repeated argument that capital inflows to Greece were used for consumption rather than investment (which supports the "profligacy" story)  is not wholly supported by evidence. Consumption was indeed high, but there was also significant capital investment. Here is gross fixed capital formation for Greece since 1995 (OECD data via the St. Louis Federal Reserve's FRED database): 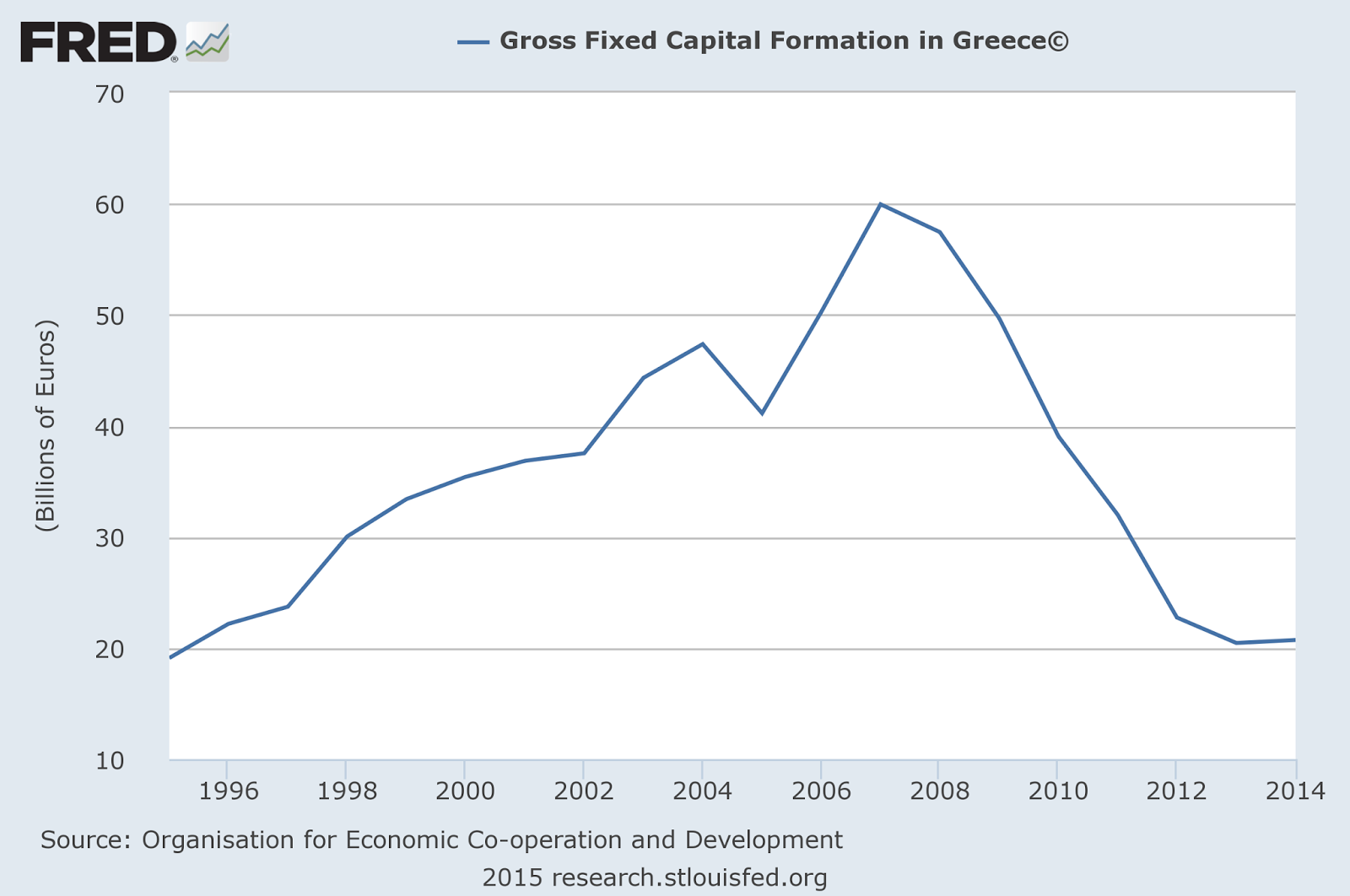 Clearly, there was substantial investment in fixed assets, which abruptly reversed in 2008. The spike just prior to 2004 is probably construction for the Athens Olympics. But what was the spike after that? The fact that the capital flows reversed so dramatically in 2008-9 suggests that this was generated by "hot money" looking for return without commitment. Similar spikes in other countries at the same time are associated with residential and commercial property booms. Did Greece have a property boom in the mid-2000s? Whatever it was, it wasn't long-term productive investment.

The present position is that both the public and private sectors are significant net foreign debtors. Neither is in a position to lend, so the only source of funds is external. And since neither can pay back what it already owes, foreigners are understandably reluctant to lend more. Restoring fiscal finances without further falls in real GDP is therefore only possible if there is a large and sustained external surplus. Professor Hausmann is indeed correct about this. In the absence of international funding, Greece's only hope is to export its way to recovery.

But this is where the competitiveness problem comes in. Greece has struggled to maintain its current account in balance, let alone surplus, for the last half-century. Even with the enormous falls in unit labour costs in recent years, it is hard to see that it would be able to maintain the substantial trade surplus that is needed to restore its economy.

Professor Hausmann says that Greece's problem is that it doesn't make products that the world wants. But I don't buy this line of argument. Demand for Greek olive oil or feta cheese would be significantly higher if they were properly marketed and sensibly priced. No, the real problem is that businesses are far too short of capital investment and productivity is far too low. And Greece is also hampered by the abject failure of the EU to deal with the large and growing trade surpluses in certain core countries, and by general shortage of demand both within the Eurozone and globally. This is not a good time to be trying to generate an export-led recovery from an appallingly low base.

And for that reason, I stand by my original argument. Greece's fiscal problems are not the "core" issue. Rather, they are symptomatic of a long-term private sector malaise. Furthermore, trying to restore Greece's public finances without addressing Greece's dismal business investment and the shortage of aggregate demand in the Eurozone as a whole is doomed to failure. The EU & IMF adjustment programme is fatally flawed, not because it is "unfocused" as Professor Hausmann suggests, but because it focuses on the wrong things.

Greece needs debt write-down in both the public and private sectors, plus business and infrastructure investment. The core countries that are allowing their trade surpluses to grow well beyond agreed limits require EU adjustment programmes of their own. And measures are required to improve Eurozone aggregate demand: the ECB's QE programme may help, as may Juncker's investment scheme, but it is questionable whether these will be sufficient to offset what remains an unjustifiably tight fiscal stance across the entire bloc.

All charts in this post except the FRED chart come from this 2012 Levy Institute paper: