By Frances Coppola - August 14, 2014
At the risk of sounding like a broken record, I'm going to say it again. The ECB is not doing its job. It is sitting on its hands and muttering about inflation while the Eurozone sinks further into depression. Even the mighty Germany's economy is shrinking, France is on the floor, Italy is in a slump and Spain's once-promising recovery looks set to be curtailed as consumer prices slide. What is the ECB doing about it? This:

The targeted longer-term refinancing operations (TLTROs) that are to take place over the coming months will enhance the accommodative monetary policy stance. These operations will provide long-term funding at attractive terms and conditions over a period of up to four years for all banks that meet certain benchmarks applicable to their lending to the real economy. This should help to ease funding conditions further and stimulate credit provision to the real economy.

In other words - nothing. Apart from lending money to banks in the hope they will lend it out, as if this hadn't been tried before and failed dismally. When will monetary authorities learn that throwing money at banks does not make them lend? The much-promised SME ABS programme, which might actually make a difference, is still only being talked about.

There is nothing whatsoever here to indicate that inflation is going to head in any direction other than downwards. The M3 lending figures are still dire. Adjusted June figures are slightly better than those for April and May, but the fact is that lending to the private sector is still falling. The table doesn't show this, but lending to the public sector is also falling as fiscal authorities tighten their budgets. That is concurrent deleveraging by both the public and private sector at the same time, with no monetary easing by the ECB to offset it.

I'm frankly astonished by the ECB's inaction. M3 is not only subdued, but according to the ECB what little growth there is, is driven mainly by investors from outside the Eurozone:

If international investors pull their money - which if the Eurozone goes deeper into depression, or geopolitical risks centred on Ukraine worsen, they may well do - the whole thing could collapse. It seems the ECB prefers to rely on external investors to do its monetary easing for it, despite the fragility that such cross-border dependence creates for the financial system. I thought the ECB had a responsibility to ensure financial stability?

The ECB's forecast of rising inflation over the medium-term seems critically to depend on banks. The thinking seems to be that the reason why lending figures are so awful is that banks are in a mess, so once banks have cleaned themselves up in order to pass the forthcoming stress tests they will start lending again, growth will return and inflation will start to rise. I fear this is magical thinking. The sort of lending that banks would need to do to restore growth across the whole Eurozone would soon put their balance sheets back in unacceptably risky territory. Are regulators really going to allow them to do this? Indeed, do we really want them to?

The damage that is being done to the supply-side in many Eurozone countries in the name of "reform" raises credit risk and discourages lending. Repairing banks is not going to offset this. The fact is that companies in depressed countries are more likely to go bankrupt than companies in countries experiencing vibrant growth. Even a cleaned-up bank is not going to expand SME lending in a seemingly endless recession. They will lend in other countries that are doing better.

And nor will reducing fiscal deficits and implementing "structural reforms" make banks any more willing to lend to risky enterprises in depressed economies. But nonetheless the ECB breathes fire at fiscal authorities:


As regards fiscal policies, comprehensive fiscal consolidation in recent years has contributed to reducing budgetary imbalances. Important structural reforms have increased competitiveness and the adjustment capacity of countries’ labour and product markets. These efforts now need to gain momentum to enhance the euro area’s growth potential. Structural reforms should focus on fostering private investment and job creation. To restore sound public finances, euro area countries should proceed in line with the Stability and Growth Pact and should not unravel the progress made with fiscal consolidation. Fiscal consolidation should be designed in a growth-friendly way. A full and consistent implementation of the euro area’s existing fiscal and macroeconomic surveillance framework is key to bringing down high public debt ratios, to raising potential growth and to increasing the euro area’s resilience to shocks.

Let's spell this out. Fiscal authorities are NOT RESPONSIBLE for the depression in the Eurozone. This is what is really going on: 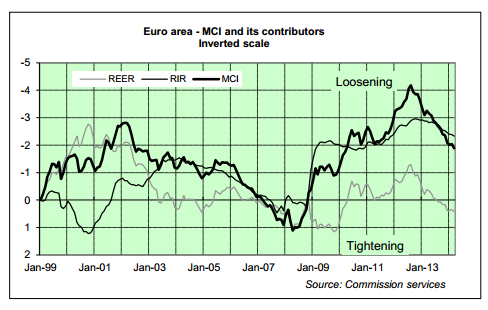 See the fall in the solid black line from mid-2012 onwards? That's monetary tightening. There has been a whopping monetary contraction in the Eurozone for the last two years. No wonder it is not recovering. In fact, no wonder the depression is now widening out to engulf the core as well as the periphery. Far from offsetting the effect of painful fiscal consolidations imposed on Eurozone countries, the ECB's excessively tight monetary policy has made their suffering worse and delayed or prevented their return to growth.

As market monetarists know, I am not a wholehearted believer in monetary offset, because I think monetary and fiscal policies have different distributional effects. In my view the Eurozone would still be suffering even if the ECB were doing monetary easing as other central banks have done. But making no attempt whatsoever to offset fiscal consolidation with monetary easing is simply disastrous. Hard-money ideology is driving the Eurozone into what Ambrose describes as "the most serious depression in Europe for 170 years" - far worse than the European Great Depression that led to the rise of Hitler. The only astonishing thing is that so far there has been so little public unrest. How on earth have the people of Europe become so docile?

The ECB is not even achieving its mandate of price stability. It is a disaster.

So what exactly can the ECB do, anyway?
Why negative rates won't work in the Eurozone - Forbes
Spain, the ECB and the power of talk - Forbes
Why the ECB won't do QE
The Eurozone credit crunch
Deflation and the ECB
The ECB is irrelevant and the Euro is a failure - Pieria
It's the Euro, stupid - Forbes
About that ECB interest rate cut
A central bank crisis
Draghi's debt trap
It's the currency, stupid
banks deflation ECB Eurozone lending