By Frances Coppola - July 25, 2014
It seems the UK is something of a poster child for economic recovery. The ONS reports that GDP has grown by 0.8% in Q2 and by 3.1% since Q2 2013. This is a pretty solid performance. And it's an important milestone, too: the UK's GDP is now back to its pre-crisis peak. 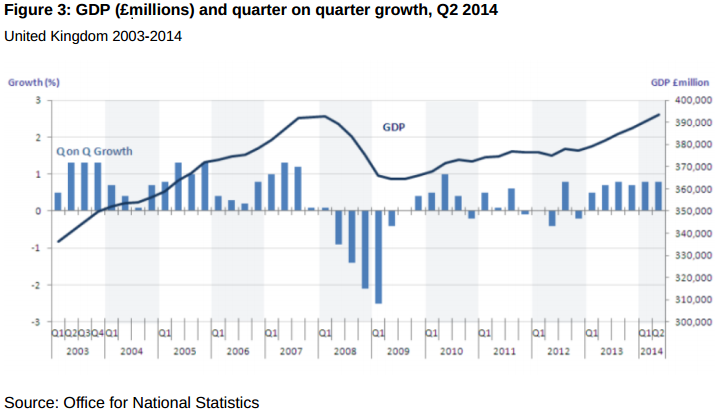 And the UK has become one of the few bright spots in the IMF's generally gloomy forecast for world growth. Upgrading the UK's growth forecast to 3.2% by the end of the year, the IMF said that the UK would maintain its position as one of the world's fastest-growing economies.

Predictably, the Coalition government and its supporters claimed this as success. George Osborne tweeted that the IMF's upgrade showed his economic plans were working:


IMF upgrades UK growth by more than any other major economy. Further evidence that our #LongTermEconomicPlan is working
— George Osborne (@George_Osborne) July 24, 2014


And Matthew Holehouse,  political correspondent of The Telegraph, describes the IMF's upgrade as "a vindication of George Osborne's economic plan".

This frankly is stretching things WAY too far. This chart from Ben Chu of the Independent places the UK's economic performance in its G7 context: 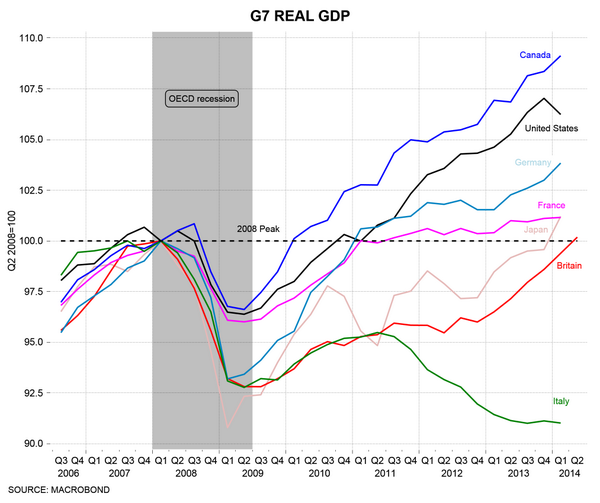 How on earth is the second slowest recovery in the G7 "vindication" of George Osborne's policies? And it's not just because the UK had a very deep recession, either. Japan - yes, you know, that country we like to think is in an eternal slump - had a deeper contraction but has recovered faster despite the tsunami and Fukushima disaster. And Germany, whose contraction was nearly as deep as the UK's, exceeded its 2008 GDP peak in Q1 2011.

In fact this chart shows clearly the derailing of the UK's recovery in 2010 just after the Coalition came to power. Note that this is BEFORE the Eurozone crisis hit in 2011: the Eurozone crisis must have affected the UK economy, but it isn't a sufficient explanation. I've also argued that high energy prices explain quite a bit of the evident slowdown from late 2010 onwards. But it is hard not to conclude, as Simon Wren-Lewis and others do, that fiscal austerity delayed the UK's recovery. Far from a vindication of the Coalition's policies, the fact that the UK is only just back to its 2008 peak after four years of Osbornomics is quite an indictment. Whatever the reason, Osborne has actually presided over the slowest recovery since the Second World War: 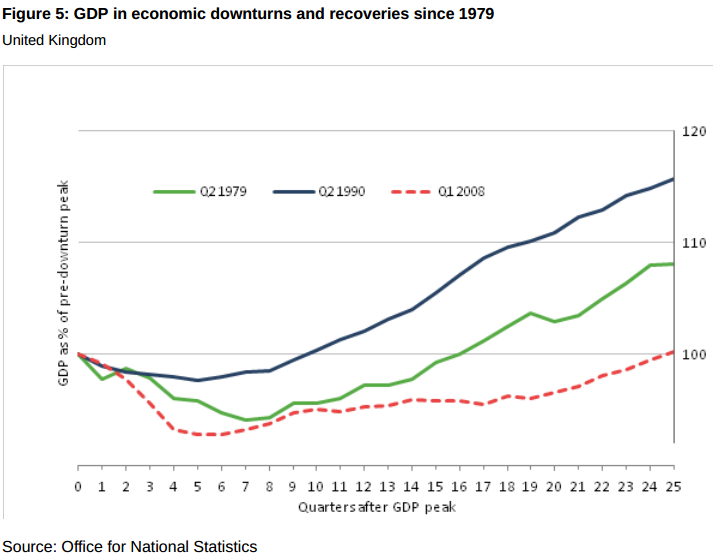 And it is also far too soon to celebrate recovery. There is still a long way to go: wages are still falling in real terms, business investment is still weak and the UK's external position is poor. GDP may be back to its pre-crisis peak, but GDP per capita is still some distance below (thanks to FT Alphaville for this chart): 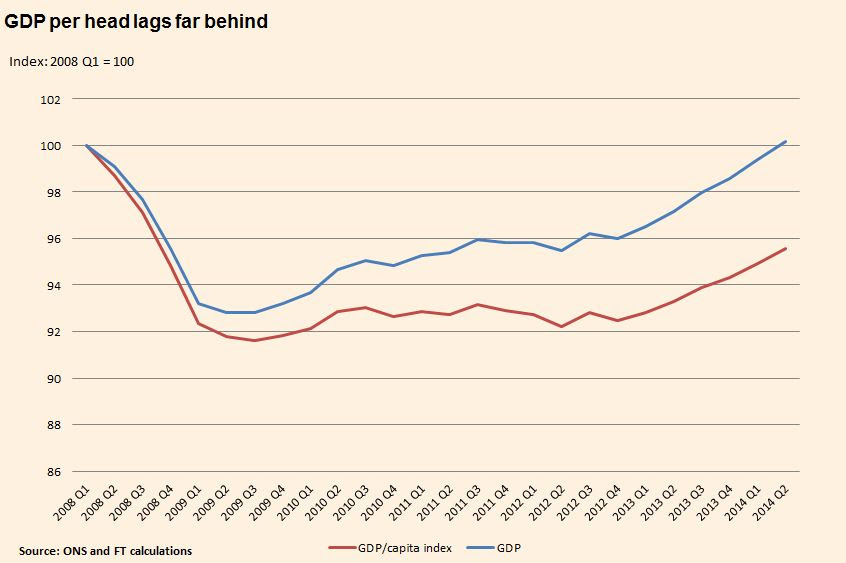 Best keep the lid on the bubbly for a bit longer.