By Frances Coppola - August 28, 2018
Skewering Patrick Minford has become something of an economists' bloodsport. I admit, I have done my fair share of Minford-bashing, though I do try to stay away from trade economics. Others are much better at lampooning Minford's antediluvian approach to trade economics than me.

Here is Minford, in the Express, talking about Brits and their holidays:


The mood of British consumers is good, reflecting the fact that the economy continues to grow and create record employment.

A staycation is best because of the Brexit devaluation, which makes British holidays unbeatable value and is driving a strong improvement in the UK’s balance of payments.

As a reminder, here is the Brexit depreciation,* charted:

No, you are not seeing things. Most of the real depreciation happened before the Brexit vote. Maybe the FX community priced in Brexit even though they didn't really expect it? Mind you, the pound has never recovered - perhaps Brexit might have something to do with that. Though personally I think it is more likely that what is keeping the pound down is the total shambles that the Government is making of Brexit. Would you invest in sterling assets right now, if you didn't have to?

But even if there were a "Brexit devaluation", the notion that it makes holidays in the U.K. "unbeatable value" for Brits is completely loony. What sterling depreciation has done is make holidays everywhere else more expensive for Brits. Holidays in the U.K. are no cheaper than they were before. They may even be more expensive, if the tourist industry is cashing in on a windfall from Brits forced to forego their customary 10 days on the Algarve. You know, demand rising faster than supply results in higher prices? For some reason, when foreign exchange is involved, Minford's grasp of basic economics seems to desert him. However you look at it, British holidays for Brits are not "unbeatable value". They are a poor substitute for the sun and sand to which Brits have become accustomed. I would also have to say, from my own experience of holidaying in the U.K., that even with sterling depreciation they may not work out much cheaper than a holiday abroad. Entertaining the kids in the British rain can be extremely expensive.

But are holidays in Britain "unbeatable value" for everyone else? This is sterling versus the U.S. dollar: 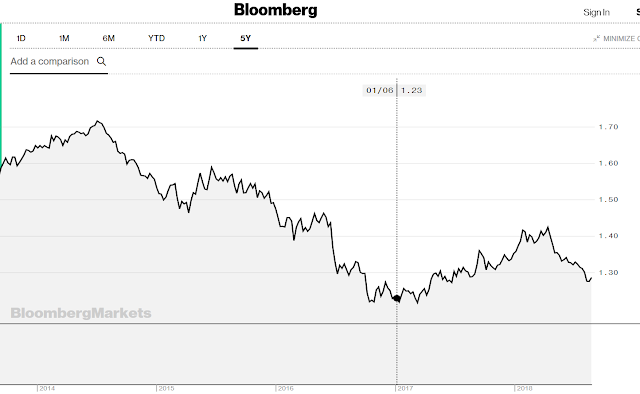 It's also worth noting that the "Brexit devaluation" in the second half of 2016 was short-lived: by the end of 2017 the pound was almost back to where it had been before the vote, though not back to where it was in 2015. Sterling depreciation in 2018 is mainly because of a very strong dollar, driven up by Fed interest rate rises, quantitative tightening and the Trump administration's tax cuts. The pound is far from the only currency that is depreciating versus the dollar.

How about Europeans? Here's sterling versus the Euro: 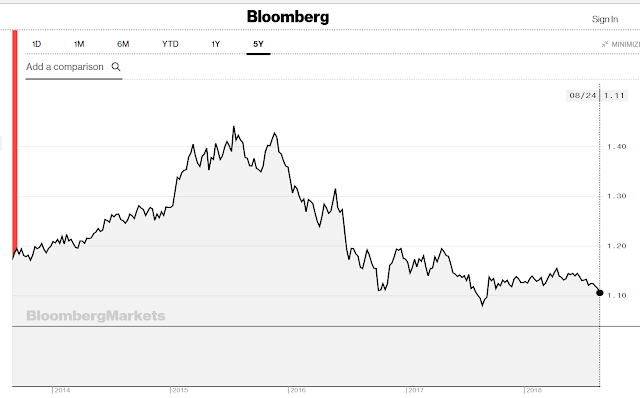 Holidaying in the U.K. looks pretty good for Europeans right now - as indeed it has for the whole of the last year, largely because of the strength of the Euro due to the Eurozone economic recovery. Yes, you read that right. The persistent weakness of sterling versus the Euro is because the Eurozone is growing more strongly than the U.K. The U.K. may have record low unemployment, but real wages are barely keeping pace with the inflation caused by sterling depreciation and, more recently, oil price rises. Furthermore, U.K. GDP growth has collapsed since the Brexit vote and is now weaker than in either the Eurozone or the U.S., according to the OECD: 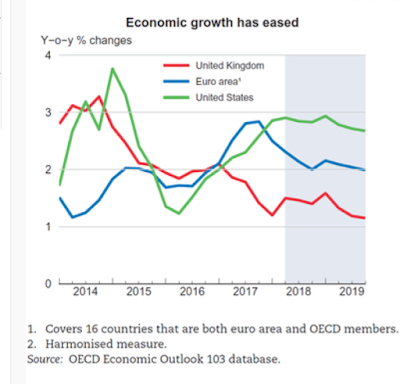 .But what about the "mood of consumers"? Is it as buoyant as Minford says? Here is what Deloitte has to say about U.K. consumer confidence right now:


Consumer confidence improved in the second quarter of 2018, according to the latest Deloitte Consumer Tracker. Overall consumer confidence grew by two percentage points to -4% benefitting from the effects of a strong labour market, gradual wage growth and the feel-good factor associated with the start of the summer...


...This represents the highest level of consumer confidence since the Tracker started in 2011 and comes after a year of consistent growth from a low point of -10% in Q2 2017. However, there is a note of caution alongside these results as confidence remains in overall negative territory.

Consumer mood, gloomy but improving. Hardly "good", is it, Patrick?

But I have been saving the best till last. Minford says that the "Brexit devaluation" - which remember is now over two years old - is "driving a strong improvement in the balance of payments". Now of course he is quoted in the Express, which is not noted for its strength in the economics department. I'm not sure that the average Express reader would have much idea what the "balance of payments" is. But readers of this blog do, so I've fact-checked Minford's statement. It's complete baloney. 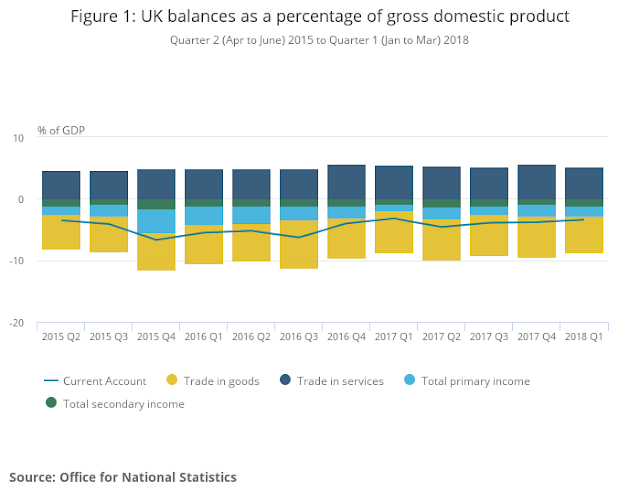 Perhaps my eyes aren't what they used to be, but this doesn't look like a "strong improvement" to me. It looks like a stubborn deficit in trade in goods, an equally stubborn surplus in trade in services, and some variation in primary income. The narrowing of the current account deficit since Q4 2015 appears to be almost entirely driven by changes in primary income, and all it has done is restore the balance to where it was in Q1 2015. That's not "improvement", it's stagnation.

But perhaps Minford means the trade balance, not the current account. The trade balance is the balance of exports and imports in both goods and services. Here it is from 2016 to Q2 2018: 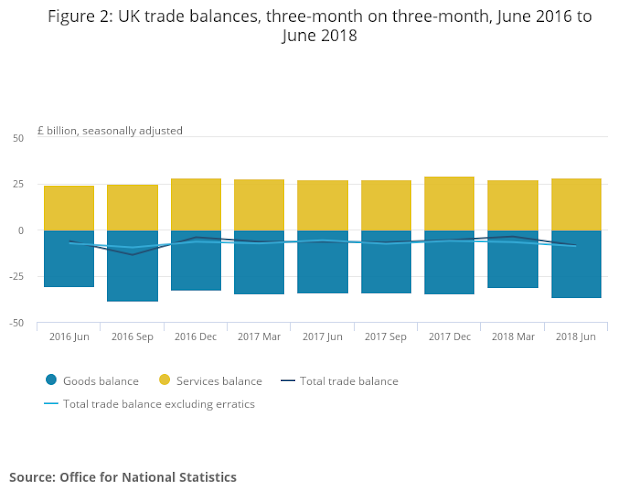 The fact is that everything Minford said is wrong. There is no "strong improvement" in the balance of payments, holidays in Britain aren't "unbeatable value" for Brits, consumer mood is not "good", and although the U.K. economy is "continuing to grow", it is much weaker than before the Brexit vote. Brexit uncertainty is undoubtedly weighing on the pound, but the "Brexit devaluation" simply is not generating the benefits that Minford claims.

Of course, if Brits all chose to holiday in Britain instead of flying to the sun, there would be an improvement in the balance of payments. Perhaps that's what Minford wants. After all, his exuberant post-Brexit forecasts (as much as 6.8% boost to GDP) depend upon sterling depreciation strongly boosting the UK's external position. He's got to bring it about somehow. So, Brits, stay at home. Your country needs it.

If I were of a suspicious frame of mind, I would at this point start wondering whether Minford set out to deceive Express readers, who - let's face it - are somewhat gullible when it comes to fictitious data and voodoo economics which support their Brexit faith. But it may be that he was misquoted by Express journalists, who aren't exactly known for factual accuracy. Or perhaps he is just losing it.

Whatever the reason, those two sentences from Minford are no more true than "£350m for the NHS" on the side of a bus. And no more honest.


* Minford incorrectly uses the term "devaluation" to mean "depreciation". Devaluation is a deliberate act of policy, usually in a fixed or managed exchange rate system - for example, Wilson's devaluation of the pound in 1967. Depreciation is a fall in the market exchange rate.
Brexit currency GDP trade