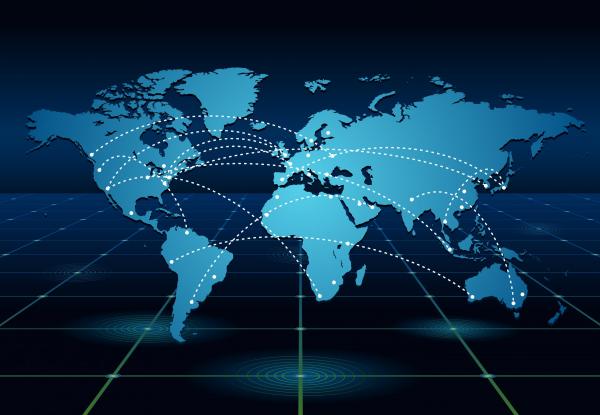 Well, this is fun. YouGov has asked the public which countries the UK's new trade negotiators (if and when they are recruited) should prioritise in their quest for free trade deals.

Unsurprisingly, the US and the EU (considered as a whole trading bloc) came top of the list. But as ever, the devil is in the detail. These charts show the difference between the public's perception of the importance of a country versus its exports and GDP rankings: 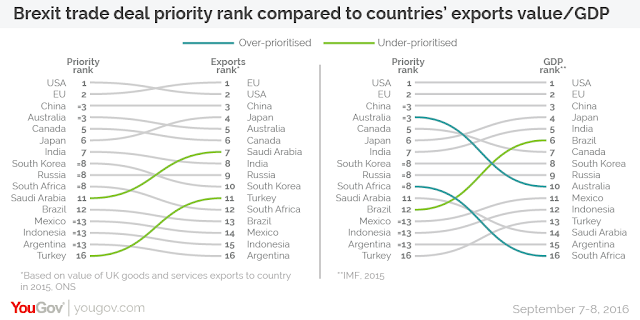 Now, of course the exports ranking is the current situation. We would expect free trade agreements to change this ranking, since countries with which the UK has free trade agreements should move up the exports ranking, and those with which it does not should correspondingly move down. The EU is currently top of the exports ranking because the UK is part of the single market. Once the UK is no longer part of the single market - as seems increasingly likely - the ranking might change. The GDP ranking is therefore possibly more important, since it indicates export potential.

But what these charts tell us about the public's preferences is disturbing.

Firstly, there appears to be discrimination against Middle Eastern Muslim countries. Saudi Arabia and Turkey are both ranked considerably lower by the public in terms of priority than either their exports ranking or their GDP would justify. Of course, the charts don't extend far enough to include smaller Middle Eastern countries, but it seems unlikely that this negative attitude is limited to those two countries.

Secondly, there is a clear preference for countries that are English-speaking and have historic colonial ties to the UK. That includes the USA, of course. But the effect is more striking for Commonwealth countries. Australia, Canada and South Africa are all significantly over-prioritised by the public relative to both their exports and GDP ranking.

Now, some of the distortion might be due to simple ignorance. Brazil is hugely under-prioritised by the public, and India is somewhat under-prioritised too relative to its GDP. This is perhaps due to public perception that these are poor countries and it would be better to target richer ones such as China and South Korea for exports. It also might reflect fear that removing barriers to imports from those countries - particularly India - would mean losing more manufacturing jobs.

But I fear much of the distortion is not due to ignorance, but tribalism. Europe and the Middle East, both of which have recently been the target of popular anger over immigration, are rejected by many in favour of older alliances. English-speaking countries are favoured over non-English speaking ones. Countries with Christian heritage are preferred over countries where other faiths dominate. Former colonies are prioritised over countries with no historic ties to the UK.

The tribal roots of the public's trade priorities are even more apparent when the voting preferences of those sampled are taken into account. Here are the top five priorities, split by political allegiance: 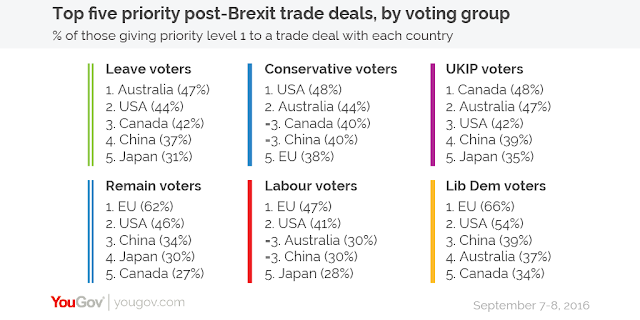 The split is striking. For those who voted to leave the EU (Leave/UKIP voters), the EU does not even make it into the top 5. But even among Conservative voters, not all of whom would have voted Leave, the EU is fairly low priority. Their allegiance is to what YouGov describes as the "Anglosphere". For all three groups, English-speaking countries are the top priority.

Of all the groups, Remain most accurately prioritises in relation to both current export rankings and potential GDP, though it does over-prioritise the EU relative to GDP. But there is a very good reason for this, which appears to be ignored by those who voted to Leave. That is the fact that the UK currently has a free trade agreement with the EU, which it is on the verge of abandoning.

The EU is the destination for half the UK's exports. Leaving the single market without a replacement trade deal would have potentially disastrous consequences for the UK's exporters. Yet those who voted Leave appear to be blissfully ignorant of this. It is folly not to prioritise the EU in trade negotiations.

But why are Leave voters (including UKIP) and many Conservatives so unconcerned about negotiating with the EU? I don't know, but there are a number of possibilities.

Some of them seem to assume that the Article 50 negotiations will establish a new trade agreement, so there is no need for separate negotiation. I've encountered a number of very intelligent people who believe this. Sadly they are wrong. Article 50 negotiation will sort out the terms of the divorce, such as the status of EU and UK migrants and the responsibility for EU pensions. It will not establish a new trade agreement between the UK and the EU. When the UK leaves the EU, it will revert to the same position as any other non-EU country vis-a-vis the EU. There will need to be separate negotiations to re-establish free trade with the EU. These might not take place until after Article 50 negotiations have established the terms of Britain's exit.

It's worth noting, too, that although Britain's exit from the EU only requires a qualified majority vote from the rest of the EU, a new trade agreement would need unanimity. Any one country could veto the entire deal - as the French have said they will do with TTIP. Furthermore, since the precedent recently set by the European Commission with regard to the draft Canadian agreement CETA, a trade agreement with the UK would need to be ratified by the parliaments of all 27 remaining EU member states. That could take a very long time, and the eventual agreement might not be all that favourable to the UK.

Others seem to think that reverting to the EU's standard tariffs for non-EU countries would not affect UK exports. I beg to differ. It would mean an immediate price increase for UK exports to the EU. This is bound to encourage price-sensitive EU importers to look for cheaper alternatives elsewhere. We should expect therefore that leaving the single market with no equivalent agreement in place would cause UK exports to the EU to fall, possibly drastically. It would also affect the EU's exports to the UK, of course - though German cars are pretty price inelastic. There aren't too many alternatives to them at the high end of the UK market.

Finally, some seem to think that losing exports to the EU wouldn't matter because we would have all these lovely new trade agreements with other countries. Never mind the EU, bring on the Commonwealth!

This is frankly delusional. Firstly, countries such as Australia are simply too small to replace the export potential of a trading bloc the size of the EU, depressed though it is. The EU currently accepts 50% of the UK's exports: Australia, 1.6%. Admittedly, these percentages would change if the UK left the single market and agreed a free trade agreement with Australia: but no way could rising exports to Australia compensate for falling exports to the EU. Australia has 23m people: the EU (minus UK), 680m. Australia's GDP is $1.56tn: the EU's (minus UK) about $14tn.

Secondly, despite all the rhetoric, the fact is that the UK is just not that important to countries such as Australia. For some years now, Australia has been establishing itself as one of China's key trading partners. It is one of the very few countries that has a free trade agreement with China, and it is a major partner in Asia's Regional Comprehensive Economic Partnership programme, which would establish a free trade area in the entire Asia-Pacific region. This is bound to be far higher on Australia's priority list than a bilateral trade agreement with a country on the other side of the world. India, China , Japan, South Korea and Indonesia are also partners in this programme. The UK is not going to be high on their priority lists, either.

For the USA, sorting out trade relationships with the Asia-Pacific region and with the EU is far more important than a bilateral trade deal with the UK. The TPP and TTIP are both in deep trouble, TPP because of opposition in the USA and TTIP because of opposition in Europe. Deciding what to do about these will be the top priority for the incoming President, whoever that may be.

So that leaves Canada, really. But their principal trading partner is the USA, and they also are trying to finalise a trade deal with the EU. The UK is simply going to be an annoying distraction.

Furthermore, even if the UK could persuade some of these countries to give a bilateral trade deal priority, trade negotiations take a very long time. Agreements with minor countries desperate to trade with someone could perhaps be established quite quickly. But it will be literally years before the UK can establish trade agreements with any major countries or trading blocs.

If the UK ends up leaving the single market, therefore, its future looks bleak for many years to come. It will face tariffs and barriers to trade everywhere in the world, including in Europe where it currently faces none.

The fact is that where global trade is concerned, the public does not know best. Ignorance, tribalism and prejudice are no basis for trade agreements.

The UK's decision to leave the EU is unbelievably stupid. All we have done is "taken back control" of our own decline.  And we will be the poorer because of it.


Image courtesy of the US Treasury.