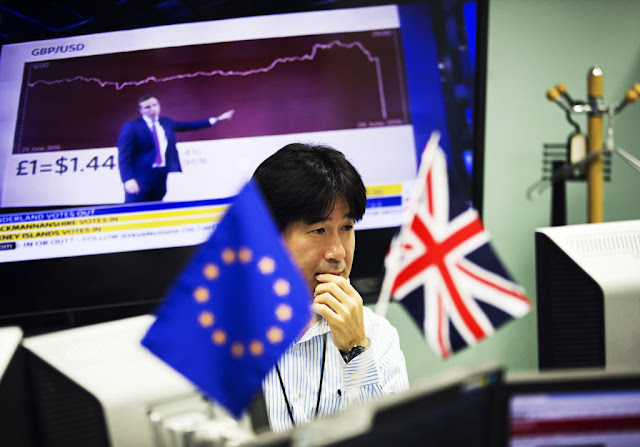 
Brexit already looks a disaster. Sterling has plunged to the lowest level in thirty years, the FTSE fell more than 12% at the open, global equities lost $2 trillion in value in less than a day, and gold, the traditional safe haven in times of turmoil, has shot up. Uncertainly reigns. Firms are less likely than ever to hire or invest. It is going to get worse.

Who shall we blame?

David Cameron is the obvious villain. He did not need to call this referendum. When he promised a vote three years ago, there was no real call for Britain to exit Europe other than on the fringes of his own party, . Cameron made a purely political decision. He knew Brexit would be bad for his country, and still he promised a referendum merely to shore up support among Eurosceptics who might support UKIP in the general election. For momentary political advantage he gambled the prosperity of the nation. He lost. If history remembers him at all, it may well be as the Prime Minister who destroyed the United Kingdom and replaced it with Little England.

Jeremy Corbyn didn’t do much better. The Leave campaign was led by right-wing Tories, but they won the election with the votes of working-class Labour supporters. Corbyn never was a fan of the EU. He voted against it in 1975, and although he supported Remain this time, he did so neither vociferously nor effectively. Corbyn could have done much more to convince Labour voters that they would be better off in Europe, that austerity not immigration was the source of their pain. That he didn’t do a better job reflects both his own lack of conviction on the subject and his ineffectiveness as an opposition leader.

Boris Johnson, the Donald Trump of Britain, also deserves blame. Born in New York City, educated at the European School of Brussels, it was as the Daily Telegraph reporter covering the EU in the 1990s that he popularised the “unelected Brussels bureaucrat” meme that took over Fleet Street. Before Johnson, the tabloids mostly ignored the EU. After, editors demanded eurosceptic stories from their Brussels reporters. Silly tone-deaf bureaucrats made better copy than economic growth, increased trade, and grants to poorer parts of Britain. Johnson, driven by personal ambition and little else, betrayed his long time friend Cameron by leading the Leave Camp. He may well be rewarded with 10 Downing Street for his perfidy.

It is satisfying to curse our politicians for their selfishness and small-mindedness, but it should not blind us to a deeper failing. The split in votes was largely geographic. London, Manchester, Bristol, Scotland and Northern Ireland voted to stay. It was little England, the suburbs, countryside, and decayed industrial towns that wanted to leave.

Ultimately, I blame us, the educated metropolitan elite that mostly supported Remain. We profited from globalization. The poor outside of the metropolitan areas, not so much. Economic textbooks tell us, quite accurately, that free trade and free movement of people increase economic growth. Not everyone will be a winner, of course, but in the aggregate we all are.  The secret then, the textbooks continue, is to use some of that increased prosperity to relieve the damage done to the losers from globalization. That lesson we ignored.

The great civilizational split of our time isn’t between Islam and Christianity but rather between metropolitan cosmopolitans and the more parochial folk outside the great cities. It is England outside the M25 that voted for Brexit. Experts told them Brexit would make them poorer, but they no longer believe the experts. And why should they? The experts have not been concerned with their wellbeing for quite some time.

In his book The Twilight of the Elites, Chris Hayes asks why meritocracy has brought such a decline in the quality of the people who run things. He answers that first, meritocracy is mostly a sham, that the social class of your parents determines your income much more than meritocrats pretend, but that the myth of meritocracy allows the successful to pretend their prosperity is purely their own doing. This deprives them of any motivation to care about the less fortunate.

The second is that inequality makes everyone, even the affluent, feel insecure. When falling from the top 1% to the top 10% is a substantial drop, members of the elite are more concerned with their own professional advancement than any responsibility towards their country. Noblesse oblige is an aristocratic concept, available only to those who feel their own position is secure. Meritocracy makes none of us feel secure. A good year does not guarantee the next.

The real problem is austerity. Britain is able to borrow at microscopic rates. We could have invested in our future, created jobs, and make our present more prosperous. But we didn’t. And now we will all be poorer.
austerity Brexit EU UK