By Frances Coppola - June 06, 2016
The chart below comes from the Rockefeller Institute's report on Public Pension Funding Practices (h/t @Silver_Watchdog on Twitter). It illustrates perfectly the point I have been trying to make for quite some time now. Pension funds are not taking on more risky investments because the risk premium has fallen, but because the risk-free rate has fallen: 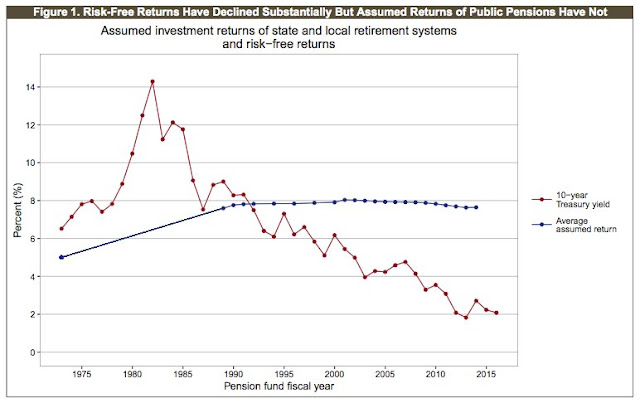 In fact, as the chart shows, the risk-free rate has been falling steadily for over thirty years.  This is not a post-crisis blip. It is a secular trend.

Yet pension investors have not adjusted their expectations of returns as the risk-free rate has fallen. Rather than targeting a spread above the risk-free rate that reflects their risk appetite, they target an historic rate. The chart suggests that the rate they are targeting has not significantly changed since 1990. Thus the risk appetite of pension fund investors has increased.

In similar vein, the Wall Street Journal mourns the passing of the 100% bond fund: 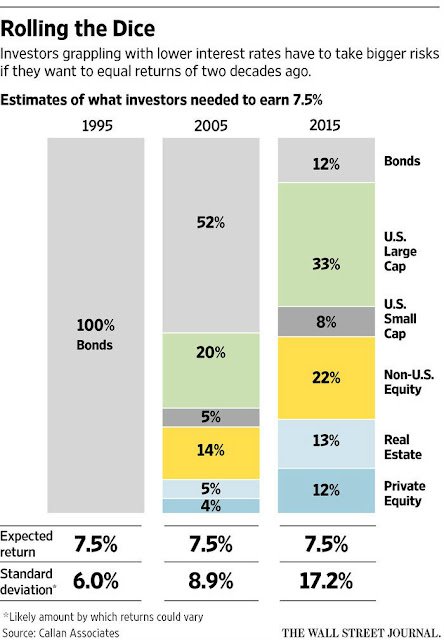 There seems to be a huge problem with mean reversion in expected returns on pension investments. Would-be pensioners expect to receive the same return on their investments as they would have received in an environment of much higher risk-free rates.

But why do investors expect to receive the returns of two decades ago? Firstly, let's consider the effect of inflation. Here is US CPI inflation since 1990 (since that appears to be the last time the risk-free rate met investors expectations): 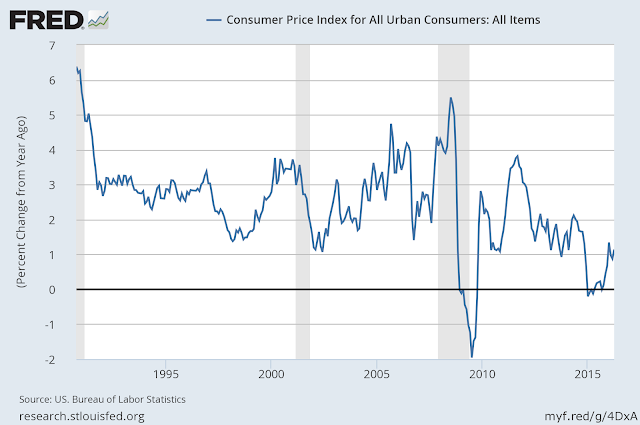 Now, CPI inflation was a bit high in 1990. But if we look at the trend since 1991, we can see that CPI inflation has fallen - admittedly not steadily, but it has come down by about 2%. So part of the explanation is money illusion. Investors are actually targeting higher real returns than they were two decades ago.

So to allow for the secular fall in inflation, investors should perhaps be targeting a return of 5.5% rather than the 7.5% that the Wall Street Journal describes as "reasonable". This would give a real return of about 4.5%.

But even this is a considerable spread above the current risk-free rate. The fact is that investors have to take more risk in order to achieve the same real returns as in 1990.

I don't yet have a coherent explanation for this. But it adds a dimension to the "secular stagnation" argument. It appears we have a problem with the pricing of risk.

Of course, it is possible that investors are persistently pricing in much higher inflation (and being persistently wrong). And it is also possible that fund managers are trying to generate the returns of two decades ago in order to justify their exorbitant fees. But there could be another explanation.

The WSJ's table is interesting, but the falling risk-free rate does not indicate that there is any serious "reach for yield" going on. Some like to think that central banks are artificially depressing the risk-free rate: but the thirty-year downwards trend does not support this. Rather, it speaks of a growing demand for safe assets relative to other forms of investment. So to my mind the growing wedge between the risk-free rate and the historic rate of return is consistent with rising risk aversion.

Some degree of risk aversion is of course healthy. Taking stupid risks endangers both the individual and society. But when risk aversion is pervasive, it becomes toxic. It engenders a mentality that regards risk as something to be avoided, not managed. It encourages unproductive and even dangerous investments in the quest for total safety - which of course can never be achieved. It dampens economic activity, as propping up the relics of past glories takes precedence over developing new enterprises.

And over the longer term, risk aversion is completely counterproductive. A systemically risk-averse economy is deflationary, stagnant and prone to bubbles, as capital is diverted from productive enterprise to "safe assets" such as property or passing fancies in the search for yield.

It is also an unstable economy. Risk-averse investors forced into riskier investment classes in search of yield are likely to run at the first sign of trouble. So we have a "risk-on, risk-off environment".

There are ageing societies the world over. If risk aversion is a defining feature of ageing societies, perhaps instability and falling real rates of return are the shape of things to come?