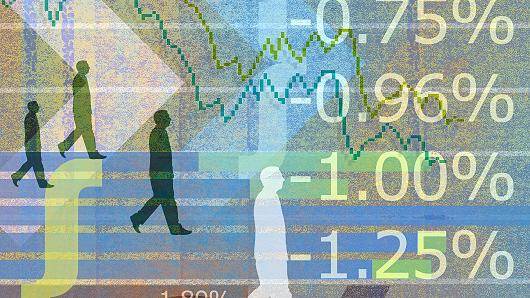 Banks are complaining. "Negative interest rates hurt our margins," they moan. Here's Commerzbank, for example, in its recent results announcement (my emphasis):


Mittelstandsbank attained a solid result in a challenging market environment. The operating profit declined in the 2015 financial year to EUR 1,062 million (2014: EUR 1,224 million), yet remains at a high level. The fourth quarter accounted for EUR 212 million (Q4 2014: EUR 251 million). The full year revenues before loan loss provisions declined to EUR 2.7 billion (2014: EUR 2.9 billion). This development is due in particular to the downturn in deposit transactions, which was driven by the negative level of interest rates on the market as well as the depreciation of a shareholding.


“There are considerable costs associated with negative rates. In 2015 alone, narrowing deposit margins resulted in a cost of more than 2 billion kroner ($302 million)".

Many will not be sympathetic to this. "If they don't want to pay negative rates on deposits at the central bank", goes the popular thinking, "they should lend the money out".

Indeed, individual banks can avoid paying negative rates on excess reserves. They can discourage customers from making deposits; they can choose to hold reserves in the form of physical cash; or they can increase new lending (not refinancing), since the balance sheet result of new lending is replacement of reserves with loan assets.*

But of course the reserves do not disappear from the system. They simply move to another bank, which then incurs the tax. The banking system AS A WHOLE cannot avoid negative rates on reserves. The reserves are in the system, so someone has to pay the negative rate. If banks increase lending to avoid the negative rate, the velocity of reserves increases. It's rather like a game of pass-the-parcel.

Now of course it is not quite that simple. In monetary systems that have required reserves calculated as a proportion of eligible deposits, increasing lending increases the proportion of total reserves that are "required", and thus reduces the proportion of total reserves on which the negative rate is payable. This is true in both the US and the Eurozone. So in these systems, increasing lending IS a way of reducing the impact of negative rates. The ECB says that since negative deposit rates were introduced there has been some increase in lending. Is this due to negative rates, or due to QE, or due to general improvement in loan demand as the economy improves, or due to restored banks loosening credit criteria? We do not know. Perhaps it is all of them.

It seems reasonable to suppose that negative interest rates might increase loan demand. Negative interest rates on reserves put downwards pressure on benchmark rates and thus on bank lending rates, attracting those who would otherwise be priced out of borrowing. But typically those are riskier borrowers. We have just spent eight years forcing banks to reduce their balance sheet risk. Do we really want to force banks to lend to riskier borrowers? Of course, tight underwriting standards could be used to deny those people or businesses loans: but doesn't that rather defeat the purpose of negative rates? It's something of a double bind.

It's also worth remembering that risky assets tie up bank capital. It is not clear that the return from lending to riskier borrowers in a very low-rate environment outweighs the cost of capital required to support them. If it does not, then banks will choose to bear the negative rate rather than increase lending. They might even raise interest rates to borrowers to cover the cost, or pass the negative rate on to certain groups of depositors.

That said, there is a wider market effect of negative policy rates that could benefit banks. Negative policy rates (deposit and funding) depress the short end of the money market yield curve. All short-term rates respond to this, so we would expect most demand deposits to carry a negative rate, along with short-term risk-free securities. The steepening of the curve should improve the margins of all financial institutions that make money from maturity transformation. For banks this is an encouragement to lend longer-term, offsetting the margin squeeze at the short end of the curve. And when the central bank is actively depressing longer-term rates with QE, negative rates could actually protect bank margins by preventing the curve from flattening.

There is a second protective effect for banks, too, pointed out by Bloomberg in the piece cited above:

Downwards pressure on interest rates acts as a form of forbearance. But again, we have to consider whether this is what we really want. Do we want banks lending to high-risk borrowers at artificially low interest rates, and reducing provisioning against existing risky loans? What would happen when we raise interest rates again?

But the banks insist that despite all this, their margins are squeezed. And the reason appears to be their own reluctance to pass on negative rates to depositors. Indeed, the Bloomberg piece headlines with "Negative rates costing billions won't hurt clients, says Danske". And it finishes with this:


"Negative rates clearly create a pressure on net interest income for the banking sector, and Swedish banks are not an exception,” according to Uldis Cerps, the agency’s executive director for banks.

That said, Swedish banks are “better positioned” because of their “good profitability,” Cerps said. That “increases their capacity to absorb further NII reduction.”

So at present, the expectation is that banks will absorb the cost of negative rates. There really is a margin squeeze. Clearly, only stronger, better-capitalised banks will be able to afford this, and they will offer more attractive rates both to depositors and borrowers. For customers, this margin squeeze looks attractive. But for banks, it looks like a cut-throat competitive spiral in which only the strongest - or those with the strongest government backing - will survive.

It also raises serious questions about the relationship of banks to the wider economy. Negative rates are effectively a tax on deposits, and as such are intrinsically contractionary. They are a form of financial repression. As long as banks choose to absorb that tax themselves, those who pay that tax will effectively be bank shareholders and employees. But if banks choose to pass that tax on, it will be savers and borrowers who pay the tax. Would the increased economic activity that negative interest rates may generate be sufficient to offset the effect of this tax?

Alternatively, if we think of negative rates as a monetary operation rather than a tax, we can say that the central bank drains back a small proportion of the reserves it adds to the system through QE. This is monetary tightening. Again, would the increased economic activity generated by negative rates be sufficient to offset this effect?

I do not know. And I do not think anyone else does either. But one thing seems clear. How negative rates would work in practice is no clearer than how QE works in practice. They are experimental, and their effects are complex. Hydraulic monetarist arguments ("if you can get rates low enough the economy will rebound") are simplistic.

I suspect that the principal effect of negative interest rates (especially in combination with QE) will not be to increase bank lending but to depress the exchange rate. And when everyone is depressing the exchange rate, there is an unpleasant race to the bottom and global trade grinds to a halt. We have played this scene before. It did not end well last time. Why do we think this time is different?

* Yes, I know banks create deposits when they lend. But for the purposes of this post I have conflated the two steps of lending, which are loan & deposit creation followed by loan drawdown. After step 1, there is indeed a new deposit which balances a new loan asset. But after step 2, the new deposit has disappeared along with an equivalent amount of reserves (asset), leaving only the loan asset.
banks central banks currency deposits lending negative rates