By Frances Coppola - February 05, 2016
Yesterday, HSBC prepared the ground for imposing negative rates on business depositors. This is an excerpt from HSBC's letter announcing the necessary change to the Terms & Conditions of HSBC business accounts:

Now, this requires some explanation. Firstly, the change applies only to BUSINESS accounts. Retail depositors are unaffected. Secondly, it applies only to currency accounts, not sterling accounts. And thirdly, despite HSBC's mention of "negative rates set by central banks including the European Central Bank", the relevant "policy or reference rate" at present is still positive everywhere except Sweden, where the policy rate is currently -0.35%.

Central banks set several interest rates, of which only one is the so-called "policy rate". The policy rate is usually the rate at which the central bank will lend to banks against good collateral: it is the benchmark not only for the interbank lending rates (Libor, Euribor and their relatives), but also for retail and wholesale bank lending rates: for example, in the UK, standard variable mortgage rates (SVRs) are typically priced as base rate plus margin.

For the US, the "policy rate" is the Fed Funds Rate. For the UK, it is "bank rate" or "base rate". And for the ECB, it is the "main refinancing operations" (MRO) rate.  The rate that HSBC refers to in its letter is the MRO rate. In effect, it is saying that if the MRO rate falls below zero, it may impose a negative rate on Euro deposit accounts held by UK business customers.

The MRO rate falling below zero is not as unlikely as it sounds. Currently, the Fed Funds target rate is 0.5%, as is the Bank of England's base rate: the Fed raised rates in December 2015, and the Bank of England has just decided to leave the base rate on hold. But the ECB has been progressively cutting interest rates since 2011. As this chart from the ECB shows, the ECB's deposit rate has been negative since June 2014 (this is the "negative rate" that people talk about), though it was recently reduced further. But more importantly, the MRO rate is only just above zero, at 0.05%: 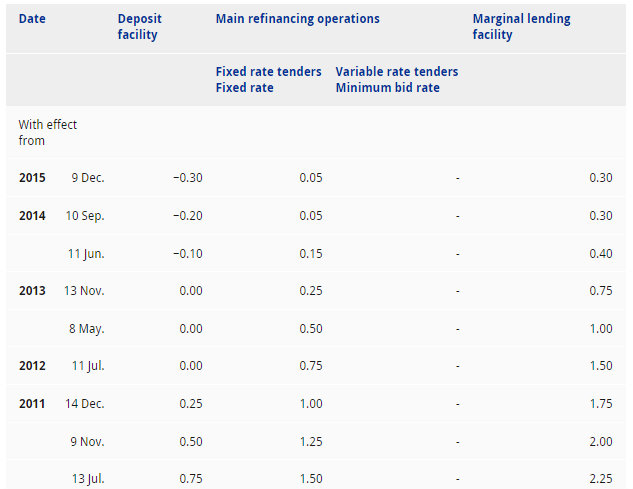 The ECB is widely expected to cut interest rates further because of continued poor economic performance and very low inflation in the Eurozone. Dropping the MRO rate below zero is no doubt one of the options being considered.

So what is the impact on banks of a negative refinancing rate? Clearly, since policy rates are benchmarks for bank lending rates, it forces down the price of new lending. Currently, banks like HSBC have resisted the temptation to cut deposit rates below zero in response to the ECB's negative deposit rate, because they have been able to maintain their net interest margins by keeping lending rates up. But downwards pressure on benchmark lending rates would squeeze their margins. So HSBC is giving notice that if the ECB pushes the MRO rate below zero, the cost to them of reducing the price of new lending in Euros may be passed on to businesses in the form of a negative interest rate on Euro deposits.

But hang on. HSBC is a British bank, and the letter has been sent to UK business customers, most of whom have sterling accounts. And these days, foreign currency payments can be made directly to sterling accounts with the bank managing the currency exchange. So who would this affect?

Now it could be argued that if a UK business faces the equivalent of a withholding tax on sales to the Eurozone, this would benefit Eurozone businesses. But if HSBC can apply this tax to its UK clients, so too can Eurozone banks to their Eurozone customers. So I wouldn't bet on this effect, personally.

It does, however, seem possible that businesses - both Eurozone and foreign - might push the cost on to customers by raising the price of goods and services. This would help bring Eurozone inflation back towards its target. But raising inflation by deliberately increasing business costs is contractionary: it would do absolutely nothing for the Eurozone's chronic demand deficiency. And businesses might choose to absorb the cost by putting downwards pressure on wages and - if possible - supplier prices, by cutting investment and even by laying off staff. They might also reduce dividends to shareholders. Given this, is hard to see how a negative MRO rate would constitute "expansionary policy".

I've argued before that negative rates are not expansionary. At that time, I hadn't thought about the trade effects. But looking at the trade effects now just confirms my view. Negative policy rates would make the Eurozone's economic performance worse. Don't go there.