Much Ado About (Almost) Nothing

By Frances Coppola - January 19, 2016
President Juncker's European Fund for Strategic Investments (EFSI) has produced an update on its progress to date. The update is a lovely piece of work, with elegant graphics and breakdowns of projects and investments by country and by sector. Really impressive. Kudos to the content management team.

But the content - oh dear, the content. The triumph of image over substance. From the EU-wide State of Play document, here is the total amount invested so far - projects and SME financing - and the countries benefiting from this investment; 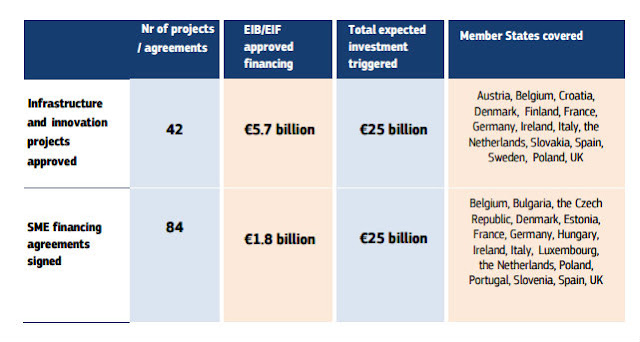 However, exactly how much is being invested in each country, and on what, is buried in country-specific documents. So I've tabulated it here. 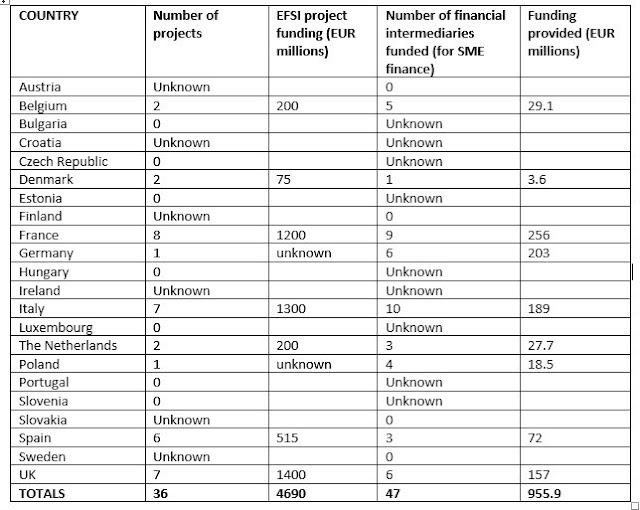 Obviously, it's incomplete. For about half the countries in this list, there is NO information. Well, this is awkward.

The cross-country projects can be identified from the sectoral analysis. Well, one of them, anyway. This map says that one of the projects in the Circular Economy sector is cross-country: 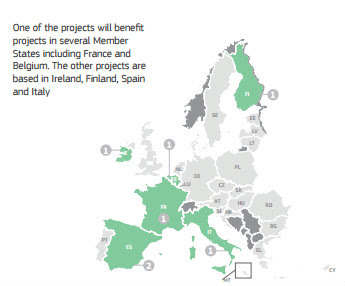 The cross-country project in question is an infrastructure fund in France & Belgium which is described as an "equity fund investing in transforming former industrial sites into uncontaminated and habitable areas". It has no funds allocated to it yet.

But this is the ONLY project identified as cross-border. So where on earth 1bn EUR supposedly invested in cross-border projects is actually going remains a mystery.

I was going to tabulate the projects by sector and cross-reference them to their countries. But I gave up when I discovered that construction of a bio-tech mill in Finland was listed under both Agriculture and Circular Economy. No doubt there are other examples of double counting, too. To be fair, the State of Play document does say that some projects are multi-sector. But the innocent could be forgiven for thinking that these were two separate projects. I think they call this obfuscation.

More importantly, though, there is no information anywhere in these documents on whether these are new projects, or projects already funded under existing EIB schemes that have simply been shoehorned into the new scheme to big up its numbers. The proportion of funding going on energy/climate change is highly suspicious: 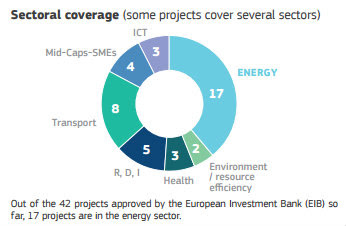 The lead time for large renewable energy and transport projects is considerable - but the EFSI has only been in existence for a few months. And this paragraph from the Energy sector sheet suggests that there are as yet very few, if any, new projects:


In the first months of 2016, the regional groups established to oversee the implementation of the Projects of Common Interest (PCIs) will discuss eligible projects that the EFSI could help finance. The EU budget for 2014-2020 already increased the energy sector allocation and the EFSI should complement it to give EU consumers access to secure, sustainable and competitive energy. The EFSI can be combined with other sources of funding in the EU budget for particular projects and platforms, in particular Connecting Europe Facility (CEF) financing (both grants and financial instruments) and European Structural and Investment Funds (ESIF). The effectiveness of the EFSI could benefit from the combination of financial instruments, EIB loans and grants in a "blending approach".

I've highlighted what is an extraordinary statement in this paragraph, given what we already know about the capital sources for the EFSI. Here is the diagram from the original EFSI proposal document. Look at the footnote: 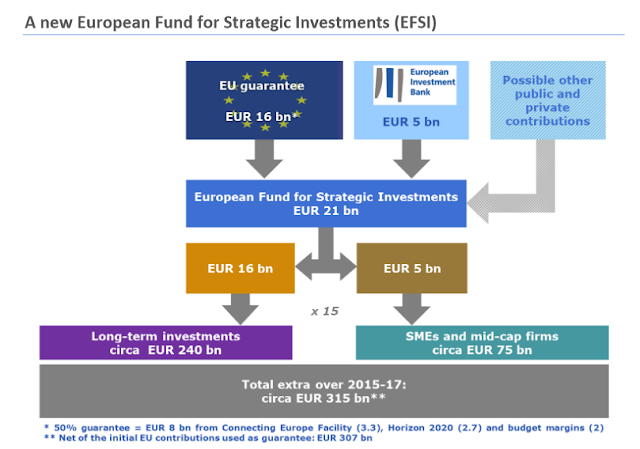 So the EFSI, which already has 3.3bn EUR of capital diverted from the CER, proposes raiding it again. This isn't "new" investment at all, is it?

I seriously doubt if there is much financing of genuinely new projects going on. I think that EU governments have simply seized on this initiative to reduce the impact on their own budgets of already-planned infrastructure investment. For example, one of the projects financed is the UK's Smart Meter rollout programme. But the UK government has been planning this for years. The rollout would have gone ahead without EFSI funding. Kudos to the UK government for its opportunism, but providing funding to rich countries for infrastructure developments that they were intending to do anyway is surely not the point of this initiative.

But whether or not there are genuinely new projects involved, the financing is pitiful anyway. Spain's total capital investment (including capital for SME investment) is 597m EUR, which is supposed to result in 1.6bn EUR in project financing and 731m EUR in financing to SMEs, a total of 2.331bn EUR. That is about 0.2% of Spain's GDP, and most of it is expected to come from the private sector. It is hardly going to make a significant difference to Spain's fortunes - especially if much of this is simply refinancing existing projects.

Nor is the money going where it is needed. For example, most people acknowledge that Germany is desperately in need of investment, and very reluctant to do it because of its fondness for trade and fiscal surpluses. You would think that Germany would have put out lots of applications for project funding under this initiative, wouldn't you? Not a bit of it. There is only ONE project application from Germany, and that isn't for actual infrastructure development - it is for a "renewable finance guarantee", which is described as a "risk-sharing facility for loans to renewable energy projects in Germany and France".

True, Germany has received 203m EUR in funding for SME investment - the public development bank KfW has benefited from this, among others. But Germany has a massive capital surplus which it exports all over Europe. Why, in heaven's name, is this scheme providing capital to German financial institutions to support investment in SMEs?

I am, frankly, underwhelmed by this piece of marketing spin. Admittedly it is early days yet, but the combination of pitiful results with typical EU fudge and obfuscation does not bode well for the future. At present, Wolfgang Munchau's prediction that the Juncker fund would not revive the Eurozone appears all too likely to come true.