The untimely end of a flamboyant dictator

By Frances Coppola - January 15, 2016
At Forbes, I have posted the latest episode in the long-running saga of the failure of Hypo Alpe Adria:


The story of the failed Austrian bank Hypo Alpe Adria (HAA), and its transformation into the world’s worst “bad bank” – the insolvent HETA – resembles a Hollywood blockbuster. Complete with a cast of thousands, colorful principal characters, an extraordinary range of special (legal) effects and a reach far beyond its national borders, the HETA saga is long, staggeringly expensive, mind-numbingly complex and at times unintentionally hilarious.

HETA’s liabilities are mostly guaranteed by the government of the province of Carinthia. Under its flamboyant far-right governor Joerg Haider, Carinthia provided deficiency guarantees for over 11bn EUR of bonds and subordinated debt issued by HAA. These would be triggered when HETA is wound up, forcing HETA’s losses on to Carinthia and – by extension – on to the Austrian sovereign. But Carinthia’s current government – now bereft of Haider and his minions – insists it cannot pay. And the Austrian government doesn’t want to pay. It has made repeated attempts to wriggle out of the guarantees and impose losses on creditors.

But the creditors are fighting back. And the mess is becoming ever more widespread. You can read all about it here.

Now, what about that colourful charlatan Joerg Haider?

Unlike other corrupt politicians and bankers, Haider is not enjoying his ill-gotten gains somewhere in the Bahamas, safe from the reach of the tax authorities authorities and the law. He died in a car crash in 2008.

The official explanation is that he hit a street lamp while drunk. Secret Ledger on Twitter explains:

... a gay bar in Klagenfurt getting off his face, as he was wont to do. @Frances_Coppola @Castle_Kearsley @crischarliepaul @LukasSustala
— Secret Ledger (@secret_ledger) January 15, 2016 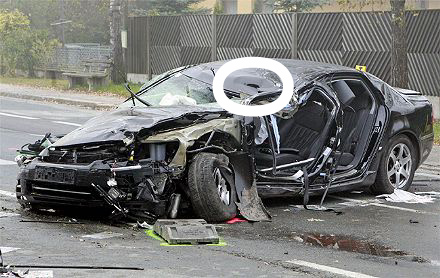 But there are always conspiracy theories, of course. See the hole in the car roof (white circle)? The link provided by Secret Ledger - from which this picture comes - suggests that the hole was made by an explosive device (translation by Google):


Conceivable would be an explosion, triggered for example by a mounted on the roof or an explosive fired by a drone missile that at the moment in which it has taken its goal this seriously injured and himself largely destroyed. This process would have taken place just before the car is out of control. The car would be in the event that this scenario is true, become a 'non-steerable floor' - not, however, because the driver had tried in vain to bring the car back under control, but because - as stated in an article [14] Jörg Haider at this time already turned and was therefore unable to somehow act on his car. The hole in the roof of the car speak for these assumptions, the lack of skid marks, just above the driver's seat, the severity of injuries and the pressed-out, flung onto the roadway the driver's side doors.

Certainly, Haider's death was awfully convenient, given that Hypo Alpe Adria was by then already in very deep trouble. It's all a bit like the death of Princess Diana, isn't it?

We will probably never know what really happened.