By Frances Coppola - January 17, 2016
Over at VoxEU, Philippe Bachetta and Ouarda Merrouche have a surprising take on "countercyclical" lending. They show that lending by US and European banks in US dollars to European non-financial corporates massively increased from 2007-2009, and that this helped to soften the effect of the European credit crunch on employment:


Over the period 2004 to 2009, we find that foreign credit denominated in dollar to non-financial corporates is countercyclical – it increased sharply (relative to domestic credit) in response to the sudden tightening of credit policies at domestic banks (Figure 1)

Here is their Figure 1 chart showing the growth of US$-denominated syndicated lending: 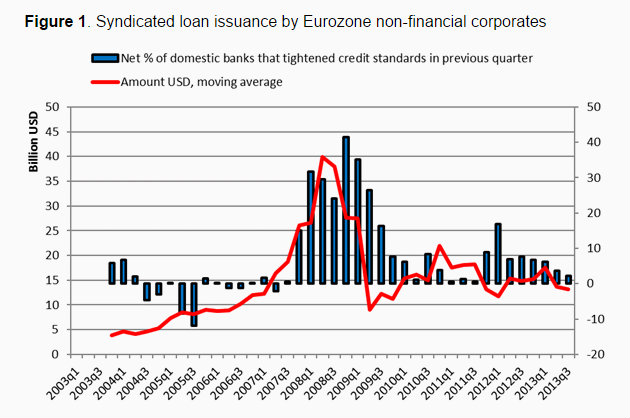 Well, ok. US$-denominated syndicated loan issuance did indeed increase massively from 2007q1 onwards. And European banks did indeed tighten credit standards from late 2007 onwards, in response to the failures of IKB and Northern Rock due to the market freeze in August 2007. The chart appears to show correlation between these events. On this basis, the researchers claim that foreign lending acted as a countercyclical buffer, preserving lending to corporates and therefore preventing a large rise in unemployment as the 2007-8 financial crisis hit.

It is evident in this chart that the increase in US$--denominated syndicated loan issuance led, rather than lagging, credit tightening by European banks. By quite a bit, in fact. Not only did issuance start to rise fast while European banks were still loosening, not tightening, credit conditions: issuance fell dramatically after the failure of Lehman brothers in September 2008, but banks went on tightening credit conditions for some time after that. According to this chart. European credit conditions were at their tightest in early 2009 - but US$-denominated syndicated loan issuance was already collapsing.

What we are seeing in this chart is a short-lived bubble in US$-denominated commercial lending. Now call me cynical, but I find the idea that a cross-border bubble in commercial lending could ever be "protective" frankly incredible. As every emerging market country could tell you, the sudden withdrawal of cross-border lending when a bubble bursts has catastrophic economic effects. It is very evident from this chart that there was such a "sudden stop" in the fourth quarter of 2008. Why do these researchers think this bubble was benign?

The researchers observe that it was US banks in particular that drove this bubble, and offer two possible explanations:


A first explanation, for which we do not find supporting evidence, is that low Fed rates may have induced a search for yield among US banks. The other explanation is that the retreat of domestic banks meant less competition in the riskier segment of the market, and this coupled with the fact that US banks were subjected to less risk-sensitive capital requirements implies that US banks had both greater opportunities and (unlike other foreign banks) also strong regulatory incentives to shift to riskier borrowers. Since US banks were operating under Basel I the shift in risk within the same asset class had no repercussion on their capital requirement.

I'm afraid these explanations do not stack up. The researchers correctly note that low Fed rates do not appear to have driven a search for yield, but this is irrelevant anyway: the Fed started to raise rates in 2004, and when the US$-denominated bubble was growing at its fastest rates were near their historical average. Low, they were not.

More importantly, the fact that the credit bubble led, rather than lagging, the tightening of credit conditions does not support the idea that US banks stepped into the space left by domestic banks. It rather suggests that this was lending to borrowers who under normal conditions would not be able to obtain lending because of their riskiness. The researchers show that it was lending to risky corporations in particular that grew during this period: 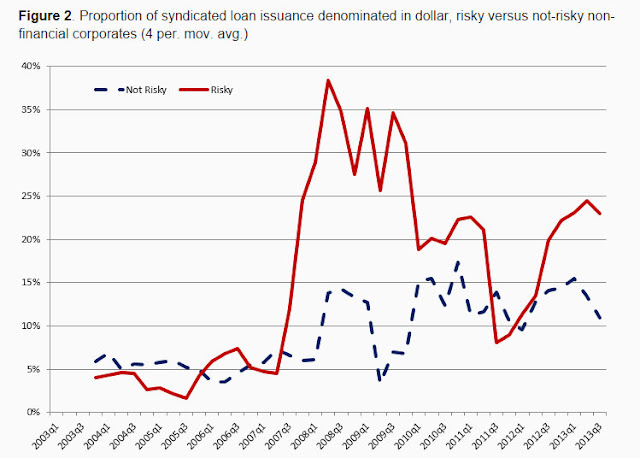 But they fail to draw the obvious conclusion that this was excessively risky "bubble" lending to marginal borrowers which was abruptly withdrawn after the fall of Lehman, with catastrophic consequences for European economies. There was nothing benign about this bubble, and it was in no way protective.

However, the researchers are right about the role of regulatory arbitrage in enabling this bubble to grow. And they also correctly note the importance of currency, though they do not draw the right conclusions. Unfortunately, though, they have misunderstood the role of European banks in this disaster.

I have written previously about the enormous growth of the Eurodollar market in the years before the financial crisis, driven by regulatory arbitrage. US banks, regulated under Basel 1 and (in the case of broker-dealers) a leverage ratio, lent initially to US households in US$ for property purchase, then securitised the loans. European banks, regulated under Basel II and therefore much more risk-sensitive than US banks, loaded up on those securities (RMBS and their derivatives). But as US households pulled back on borrowing and the securitisation engine started to falter from 2006 onwards, US banks looked elsewhere for high-risk, high-return lending to prop up their return on equity without hitting their balance sheet leverage limits. This is why the European corporate credit bubble grew. The risk-averse stance of European banks undoubtedly contributed, but the principal driver was the failure of the US residential mortgage market.

And this, I'm afraid, invalidates their conclusion. The US$-denominated commercial lending bubble in Europe was part and parcel of the excessively risky bank lending that directly caused the 2008 financial crisis. Yes, those corporations that were able to borrow in US$ may have reduced unemployment less than those that did not. But the collapse of this bubble itself contributed to the deep recession that affected the whole of the Western world after the fall of Lehman. To assert that this bubble was in any way "countercyclical" and "protective" to European economies is thus, I'm afraid, absurd.