By Frances Coppola - January 31, 2016
Japan has just introduced negative rates on reserves, following the example of the Riksbank, the Danish National Bank, the ECB and the Swiss National Bank. The Bank of Japan has of course been doing QE in very large amounts for quite some time now, and interest rates have been close to zero for a long time. But this is its first experiment with negative rates.


The new negative rate framework is complicated, to say the least. The Bank of Japan has helpfully produced a pretty picture to explain it: 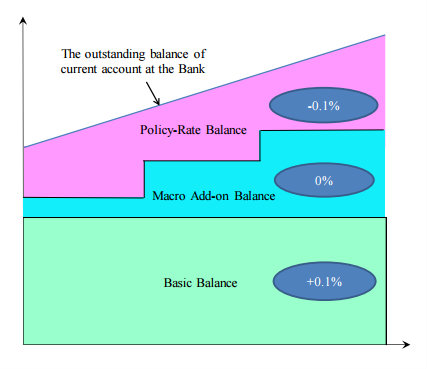 The bottom tier is a "basic balance" which is the existing reserve level in the banking system:

The average outstanding balance of current account, which each financial institution held during benchmark reserve maintenance periods from January 2015 to December 2015, corresponds to the existing balance and will be regarded as the basic balance to which a positive interest rate of 0.1 percent will be applied.

So existing reserves will (overall) continue to bear positive interest. Even banks that hold more than their benchmark level may avoid the negative rate, since the Bank of Japan has allowed for a reserve buffer at a zero interest rate:

A zero interest rate will be applied to the sum of the following amounts outstanding.

c) The balance calculated as a certain ratio of the amount outstanding of its basic balance in (1) (macro add-on).

The calculation will be made at an appropriate timing, taking account of the fact that the outstanding balances of current accounts at the Bank will increase on an aggregate basis as the asset purchases progress under "QQE with a Negative Interest Rate."

Banks that manage their reserves cleverly will be able to avoid the negative rate on most of their reserves. Indeed, this seems to be the Bank of Japan's intention, according to a footnote:

A multiple-tier system is intended to prevent an excessive decrease in financial institutions' earnings stemming from the implementation of negative interest rates that could weaken their functions as financial intermediaries.

Those who think that the purpose of negative rates is to encourage banks to lend are now no doubt muttering darkly about bank lobbying and "revolving doors". But the negative rate is not about bank lending. It is in fact a further strengthening of Japan's "quantitative and qualitative easing" (QQE) programme:

The Bank will lower the short end of the yield curve by slashing its deposit rate on current accounts into negative territory and will exert further downward pressure on interest rates across the entire yield curve, in combination with large-scale purchases of JGBs.

And just in case this is not clear, the Bank of Japan explains in a footnote that the purpose of the negative rate is to influence market prices (my emphasis):

Thus there is no need to penalise banks heavily for holding excess reserves. The negative rate is not primarily intended to encourage banks to lend.

But why is the Bank of Japan so intent on cutting interest rates? After all, it has just produced a pretty upbeat forecast for the Japanese economy. Yes, household spending is weak, and wages are stagnant, but corporate profits are at record highs and unemployment at a record low. Inflation is hovering around zero, but that is largely because of falling oil prices, which is net positive for the Japanese economy as an oil importer. What on earth is this all about?

It's about China, mostly:


Recently, however, global financial markets have been volatile against the backdrop of the further decline in crude oil prices and uncertainty such as over future developments in emerging and commodity-exporting economies, particularly the Chinese economy.

The external environment for Japan is becoming increasingly difficult. Central banks across South East Asia are cutting interest rates and putting downwards pressure on their currencies in response to collapsing commodity prices and China's slowing economy. The offshore yuan (CNH) is falling, and China is progressively devaluing the onshore yuan (CNY) in response, in addition to doing various forms of yuan monetary easing. China has now broken the CNY peg to the US dollar, replacing it with a basket of currencies: since CNY is no longer pulled upwards by the US dollar, devaluation seems likely to proceed faster despite China's tightening capital controls.

Japan's exports are suffering from the Chinese slowdown, and from emerging market weakness generally. The trend has been downwards for the last year:

Exports not only to China, but to its other South East Asian export partners - notably South Korea - have fallen significantly. Even exports to the US have recently fallen, despite the strong dollar. And although the balance of trade improved in December, this is only because imports fell even more.

For an economy as short of internal demand as Japan, an external trade collapse is something of a disaster. It has no choice but to respond to monetary easing by its South East Asian trade partners and hope that better times return soon.

Of course, no-one would dream of doing competitive devaluation to gain export advantage, would they? Perish the thought. The Bank of Japan says that the interest rate cut is all about inflation. And indeed it is. Cutting interest rates depresses the exchange rate, and depressing the exchange rate raises inflation. Perfectly legitimate behaviour for an inflation-targeting central bank.

But I'm sorry, they can call this inflation control if they want, but the effect is the same. Deflationary economies desperately seek demand from external sources that they cannot generate at home, and these days they do so by using interest rate cuts and QE to depress the value of the currency while pretending that it is all about stimulating the domestic economy. Japan's move is no different from that of other local central banks: it is externally-driven, and the target is the exchange rate, not domestic interest rates and bank lending. The only difference is that Japan's interest rates were already on the floor because of its long-standing domestic deflation, so protecting against an external economic slowdown inevitably meant negative rates.

This is why Japan has firewalled its banks with a complex three-tier scheme. It has created a structure that will enable it to cut rates far more deeply into negative territory without breaking the banks. There is more, much more, to come.