In the bleak midwinter 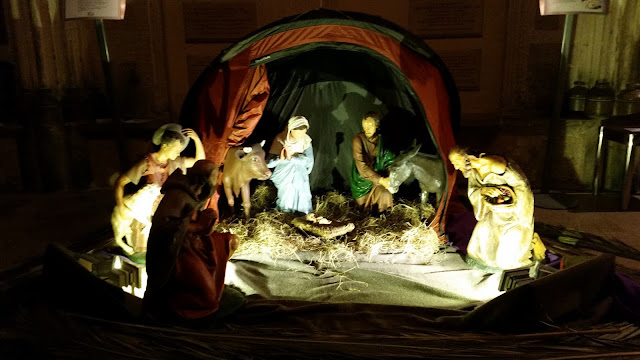 In the latest of his excellent reports for the BBC on the refugee crisis in Europe, Feargal Keene focuses on the plight of children. A baby, only a month old, makes the hazardous crossing from Turkey to the Greek island of Lesbos. Little children, freezing cold and wet through, climb the muddy path up from the beach. Volunteers from many nations provide food, blankets and medical care for these tiny lives.

But Lesbos is only the start of their journey, And in Europe, it is winter. Across the continent, refugees - including many children and babies - huddle round camp fires at the borders, waiting to be admitted. But the signs are up everywhere. "No room....."

At this time of year, Christians sing carols about a baby born in a stable, because there was no room in the inn. A baby born to a migrant mother, in freezing conditions in the middle of winter. "Behold a silly tender babe, in freezing winter night, in homely manger trembling lies. Alas, a piteous sight", wrote Robert Southwell in the 16th century.

Indeed, a piteous sight. Though these days it would be a tent, not a stable. Along Europe's refugee routes, babies are born every day to migrant mothers. In a report produced in November 2015, Unicef describes the plight of these babies and their mothers:


Women who have recently given birth are less resilient to the stresses of the journey and risk being unable to continue breastfeeding, as families are swept along migration routes, through reception centers, and loaded onto buses and trains. Babies are born every day along the migration routes – in very unfavourable conditions – and carried along as newborns.

Jesus started his life as a migrant, and continued it as a refugee. He fled with his parents to Egypt to escape the insane despotic tyrant Herod. But although he escaped, others did not. Prudentius, writing the 5th century, speaks with grief and anger of the little boys murdered by Herod:


Are these the first blood-offerings
to come before the Christ - a band
of babies playing on the altar-steps
with palms and coronets?

What use this rash enormity?
What profit in this wasteful wrong?
So many deaths, and Christ alone
escapes from Herod's questing hand.

So many deaths.....Unicef reports that 30% of over 3,500 migrants who died in the Aegean in 2015 were children. In October alone, at least 90 children died, of whom one fifth were under two years old: twenty of those deaths were in one shipwreck on 28th October. Babies and small children are particularly at risk of drowning, because they can slip from their parents' arms in the turmoil of a shipwreck.

And the risk does not end at the shore. Unlike the Palestinian West Bank where Jesus was born, winter in much of Europe features freezing conditions, snow and ice. "In the bleak midwinter" was never an accurate picture of Jesus's birth: but it is all too real for babies and small children on the refugee trail. They have heightened risk of dying or becoming seriously ill from hypothermia or pneumonia.


Unicef reports that over 1 million children made asylum applications in Europe in 2015. Many more have yet to make applications. And every day, more arrive. Most of these children are from Syria, Afghanistan and Iraq, fleeing the conflicts there: many of the older children are unaccompanied, and at risk of trafficking and abuse. They shiver with cold on the borders, and tramp wearily from country to country, while European countries argue about who should house them.

Because Jesus was born a migrant and became a refugee, Christianity emphasises the importance of welcoming the "outcast and stranger". But the supposedly Christian countries of the West have no welcome for the people on their borders. Forgetting the demands of their religion, they refuse to open their doors to today's "outcasts and strangers". They condemn Muslims who commit violent acts in the name of their religion. But what they are doing is worse. There is nothing humane, let alone Christian, about letting children drown, or die of cold, hunger, exhaustion and illness. Today's Holy Innocents are the little ones washed up on the beach in Greece and buried in unmarked graves along the refugee trail.

There are more ways than one of committing murder.


Image is of the Tented Crib at Rochester Cathedral, England, Christmas 2015. Photographed by me with kind permission of the Dean and Chapter.