Latvia is often held up as the "poster child" for harsh austerity measures as the means of returning to strong economic growth. In order to hold its currency peg to the Euro, it embarked on a brutal front-loaded fiscal consolidation in 2009, sacking public sector workers, slashing public sector salaries, cutting benefits and raising taxes. Between 2010 and 2013 it cut its fiscal deficit from 10% of GDP to a respectable 0.8%, a remarkable achievement by any standards.

Much of this was due to an equally remarkable rebound in GDP. After experiencing the deepest recession in the Western world in 2009 and an IMF programme, Latvia emerged from recession in 2010 and thereafter grew strongly. By 2013, the IMF's chief economist Olivier Blanchard, who had criticised Latvia's decision not to devalue, was eating his words. Latvia was out of intensive care and well on the road to recovery.

Austerians like to claim that Latvia's strong recovery was entirely due to its harsh austerity measures. But this, I fear, is the "post hoc ergo propter hoc" fallacy. Without adequate counterfactual evidence, we do not know what if any difference the fiscal consolidation made.

What we do know is that unlike most Western economies, Latvia experienced a fast rebound in bank lending after the crisis. The Bank of Latvia's bank lending survey for January 2010 notes that the "marathon" of tightening credit standards in the wake of the financial crisis had come to an end. By July 2010, this had led to a dramatic increase in loan demand by both non-financial corporations and households:

The increase in credit to households generated recovery in the housing market, although it stayed well below its previous dizzy highs:

The increase in lending to non-financial corporations was good news. In its Bank Lending survey in July 2011 the Bank of Latvia noted that Latvian corporations were borrowing primarily for investment:

Blanchard, Griffiths and Gruss in their 2013 analysis of the Latvian miracle note that there was a large increase in productivity. They ascribe this primarily to labour shedding, and indeed Latvia's very high unemployment and high emigration rate support this argument. But increased investment also seems likely to be a contributory factor.

The combination of domestic demand collapse with improved industrial production resulted in a sharp correction in Latvia's external balance:

But none of it lasted. The current account surplus quickly dissipated, leaving Latvia with a small but persistent external deficit. Industrial production declined in parallel. And the recovery in house prices was similarly short-lived. By the end of 2013, Latvia's GDP growth had sunk to just above zero. And there it has remained ever since. Latvia's remarkable recovery was in truth a "dead cat bounce".

So what caused a promising recovery to fizzle out? The Bank of Latvia's July 2012 bank lending survey contains disappointing news about credit standards:

The extent of credit standards tightening is shown clearly in these charts: 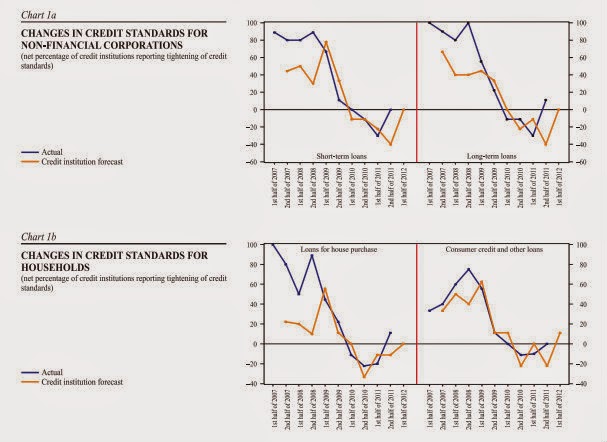 And this followed through into reduced loan demand both from corporations and households: 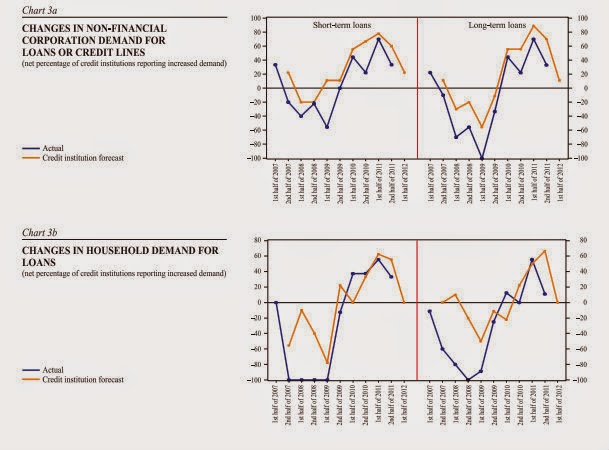 What is particularly disappointing about this forecast is the expectation from banks that loan demand would fall. They knew that tightening credit standards would cause lending to decrease. And as we know that for small economies with limited access to capital markets it is bank lending that drives economic activity, the banks' forecast therefore amounts to a prediction of economic slowdown - caused by their own behaviour in tightening credit standards. Since then there has been no further relaxation of credit standards and no resurgence in loan demand.

But why did banks start lending again so quickly after Latvia's collapse? And why did they then restrict credit? To explain this, we need to understand the nature of Latvia's banking sector. It is largely foreign-owned, mainly by Scandinavian banks. Of these, the most significant are Swedish banks.

The Swedish bank bailout in 1992 has been widely admired as a model of how to deal with a banking crisis. Depositors and bondholders were protected, shareholders were diluted or wiped and banks were forcibly restructured, in some cases through nationalisation. Perhaps because of this swift and effective action by Swedish authorities, Swedish banks did not build up the dangerous leverage of other global banks. The market freeze in 2008 forced them to stop lending, and the falling value of Baltic real estate assets after the crisis damaged their balance sheets, but they recovered quickly and were soon able to commence lending again.

Though they didn't have to lend in Latvia. So why did they? I think Latvia's fiscal consolidation played a part, not because it imparted confidence - though it may have done - but because the government's insistence on holding the currency peg to the Euro at all costs encouraged restoration of cross-border lending. Foreign banks could lend with impunity both in Euro and Lat because they knew the government would not devalue. So Latvia is indeed a poster child for the benefits of austerity in a fixed-currency regime, if what you want is restoration of foreign capital inflows after a sudden stop.

But why did Latvia's banks subsequently reduce lending? I don't think this has anything do to with Latvia. An analysis of Sweden's banks by the IMF in 2012 showed that after an initial post-crisis increase (from which Latvia benefited), they progressively reduced cross-border exposures, no doubt under regulatory pressure to reduce balance sheet risk: 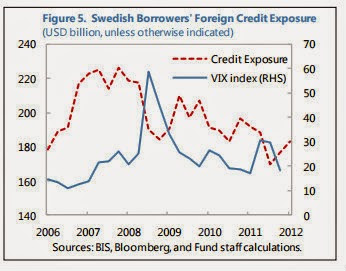 By 2012, Swedish bank lending to the Baltics had fallen from 11% of their total cross-border exposure to 8%. This is a larger fall than it appears, given that the banks were also reducing total cross-border exposures as a proportion of their balance sheets. The Baltics are small countries: this reduction is unquestionably significant. And for Latvia, the fall in corporate lending is particularly worrying, because that is what is really needed to generate long-term growth.

Latvia has little or no control of its monetary conditions, and now it has joined the Euro it doesn't have much control of fiscal policy either. Its prosperity is entirely determined by the commercial interests of foreign banks and the attitude of their regulators. Is this really what the people of Latvia want?