Central bank lending and the Great Fire of London 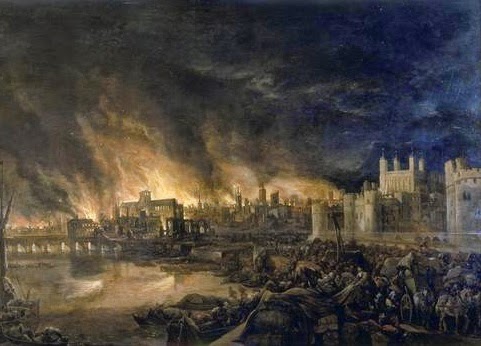 My Forbes post criticising Senator Elizabeth Warren's attempt to restrict Fed liquidity in a crisis has caused something of a storm. It seems that people can't distinguish between providing unlimited liquidity to the financial system and providing unlimited government funding to banks. The first of these is essential. The second is not.

I do not, and never have, supported the second of these. Indeed I was one of the voices soon after the crisis that called for banks to be allowed to fail. But restricting central bank liquidity in a crisis is terribly dangerous.

Consider a fire in a closely-built city - let's call it the City of London. Because the houses are very close together - indeed many of them are interconnected - and are made of wood, fire spreads easily. Do you restrict the amount of water the fire brigade can use to put out the fire, even though there is unlimited water available from the nearby river? Do you tell the fire brigade it must only spray houses where the householder has fire insurance - the rest must be allowed to burn? Do you tell the fire brigade it must stop spraying water after thirty minutes whether or not the fire is out? No, you wouldn’t do any of these. You would regard it as madness. The priority is to stop the fire, not to decide who deserves to keep their house and who does not. That is the job of central bank liquidity. It stops the crisis.

Once the fire is out, then by all means decide who deserves to have their house rebuilt or refurbished by the government, and who does not. And redesign the city so fires can’t spread so easily, change building standards so houses are built of fire resistant materials (stone, brick, marble), tighten fire regulations, educate bakers about the dangers of leaving ovens unattended.

Similarly, once the financial crisis is over, kill off banks whose capital has fallen too low, do radical surgery on banks that are damaged but could be restored, make extensive changes to the design and regulation of the industry to reduce both the likelihood of future crises and their damaging effects, and educate bankers on the importance of responsible risk management. We didn’t do this properly after the 2008 crisis: we did not kill off badly damaged banks, we did not restructure the rest as we should have done and we have taken far too long to tighten regulations and retrain bankers. On this, I agree with Senator Warren.

"Lend that reserve most freely in time of apprehension". No restrictions. No "good collateral", "penalty rate" or "solvent institutions". Those are restrictions for liquidity support to individual banks in normal times, not in a crisis.

And why? Because failing to lend freely makes the crisis worse. Half-hearted emergency lending is worse than none at all. Bagehot is uncompromising: "To lend a great deal, and yet not give the public confidence that you will lend sufficiently and effectually, is the worst of all policies; but it is the policy now pursued." Stopping financial crises requires unlimited liquidity, just as ending the Great Fire of London required unlimited water. We would be foolish to turn off the taps.

The Great Fire of London was eventually put out. But the mediaeval City of London was in ruins. In the rebuilding programme, streets were widened and buildings were built of stone, not wood. There has never been another fire so devastating. But there have nonetheless been fires from time to time. We still need our fire brigade.

Anatomy of a bank run
Cleaning up the mess