By Frances Coppola - May 10, 2015
While in Washington DC last week, I visited the Franklin D. Roosevelt memorial - a beautiful, peaceful construction on the banks of the Potomac Tidal Basin.

This is one of the walls of the memorial. On it is a quotation that made me weep. 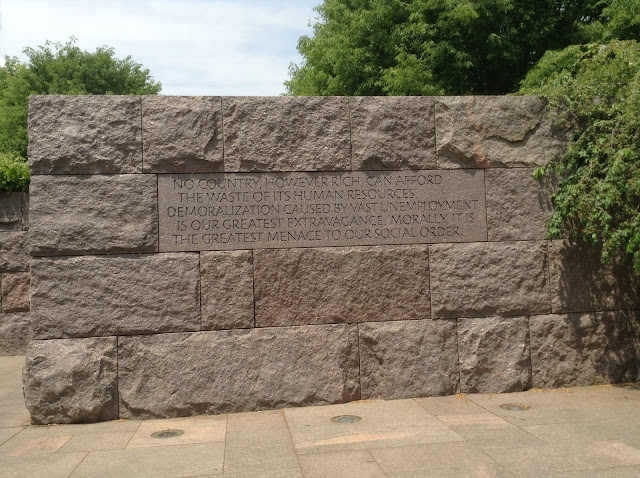 My grief was not for the Americans whose lives were wrecked by the terrible unemployment of the Great Depression, about whom FDR was speaking. No, it was for Europe. For the millions of Europeans whose lives are being devastated by the unemployment plague that is currently sweeping Europe. And for those in power in Europe, who do not share FDR's outrage at the ruin of lives and hopes, and who use weasel words such as "structural reform" and "internal adjustment" to blind themselves and others to the human tragedy of unemployment.

Adult unemployment in the Eurozone is currently over 11%. Even in the wider EU it is nearly 10%. Compare this with Japan and the USA: 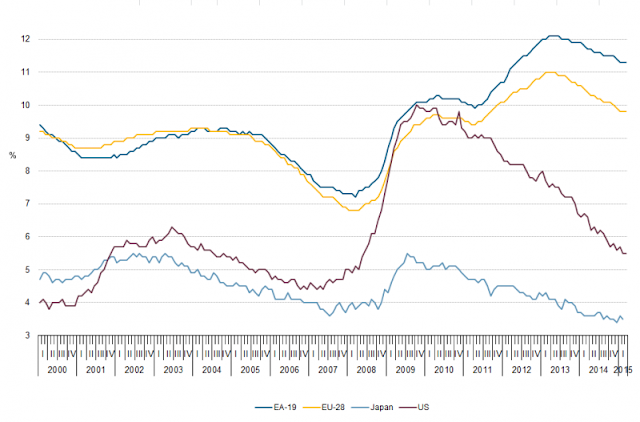 Such high adult unemployment is itself a tragic and appalling waste of human capital. But it pales into insignificance when compared to this: 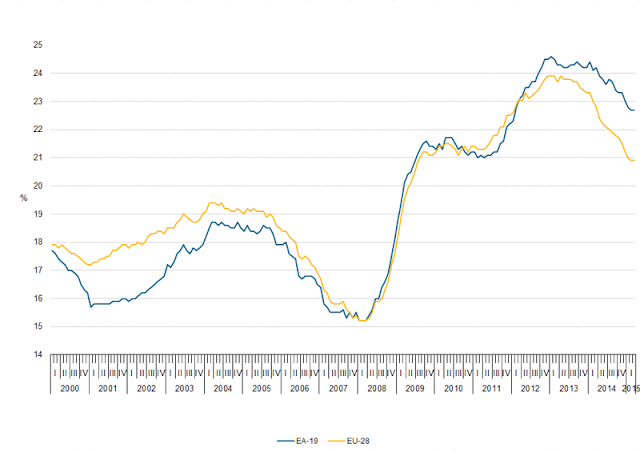 This is a dry depiction of the destruction of the hopes and prospects of an entire generation. Eight years after the financial crisis, nearly a quarter of  "economically active" young people (i.e. excluding those in education & training or unable to work for other reasons) in the EU are unemployed.

As with adult unemployment, the spread is wide. In some countries half of "economically active" young people are out of work. Even in the oh-so-successful UK, a fifth are unemployed. 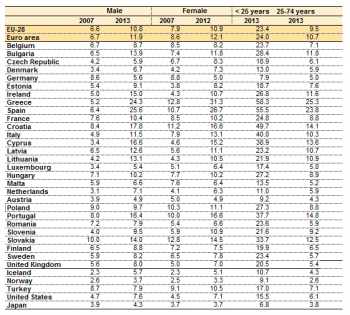 UPDATE. Paul Bivand and Declan Gaffney point out that this is somewhat misleading, since the economically active youth population is falling because more young people stay on in education and training, which inflates the youth unemployment rate. Declan explains the effect for the UK in this post, and Paul provides Eurostat NEET figures as a proportion of total youth population. The effect of including economically inactive young people in the denominator varies considerably by country: for Greece and Spain it halves the unemployment rate, whereas for the UK it reduces it by only 8 percentage points. Obviously there could be many reasons for this, but the reduction appears to be larger in countries with higher unemployment rates, which suggests that young people in countries with high unemployment are more likely to stay on in education and training. NEET figures therefore contain an element of concealed unemployment.

Unemployment scars young people for life. We know that people who have periods of unemployment soon after leaving school or college never reach the earning power of those who do not. Youth unemployment in Europe is a human tragedy on a greater scale than America's Great Depression. It is wanton destruction of the social fabric of Europe. I could even describe it as a holocaust. Young people are being sacrificed across Europe to protect the wealth of a minority. It is an outrage.

FDR's message resonates down the decades, a poignant reminder that we have been here before:


No country, however rich, can afford the waste of its human resources. Demoralization due to vast unemployment is our greatest extravagance. Morally, it is the greatest menace to our social order.

This is an extravagance that Europe cannot afford. Unemployment, not debt, is the biggest issue facing the EU. If not addressed, it will blight not only the present, but the future too.

All charts from Eurostat. Photograph by me.