Reflections on Recovery and Reform

By Frances Coppola - January 26, 2015
As Greece prepares to reject the fiscal austerity that has been imposed on it for the last six years, here are some thoughts on the process of Recovery and Reform that Greece, and others in the Eurozone, have been undertaking in the past few years. They are not mine: the identity of the writer will be revealed later in this post (though many of you will no doubt recognise the writing style, if not the actual words).


"You are engaged on a double task, Recovery and Reform;--recovery from the slump and the passage of those business and social reforms which are long overdue. For the first, speed and quick results are essential. The second may be urgent too; but haste will be injurious, and wisdom of long-range purpose is more necessary than immediate achievement. It will be through raising high the prestige of your administration by success in short-range Recovery, that you will have the driving force to accomplish long-range Reform. On the other hand, even wise and necessary Reform may, in some respects, impede and complicate Recovery. For it will upset the confidence of the business world and weaken their existing motives to action, before you have had time to put other motives in their place......

"Now I am not clear....that the order of urgency between measures of Recovery and measures of Reform has been duly observed, or that the latter has not sometimes been mistaken for the former. That is my first reflection--that....which is essentially Reform and probably impedes Recovery, has been put across too hastily, in the false guise of being part of the technique of Recovery.

"Thus as the prime mover in the first stage of the technique of recovery I lay overwhelming emphasis on the increase of national purchasing power resulting from governmental expenditure which is financed by Loans and not by taxing present incomes. Nothing else counts in comparison with this. In a boom inflation can be caused by allowing unlimited credit to support the excited enthusiasm of business speculators. But in a slump governmental Loan expenditure is the only sure means of securing quickly a rising output at rising prices ."

How far removed is this from the policies currently being pursued by governments in Europe under pressure from Brussels and Frankfurt? The SGP and fiscal compact simply do not permit the expansionary fiscal policy that the writer suggests is the fastest way of restoring lost output. No wonder large parts of the Eurozone are in a protracted slump.

But surely monetary policy can do the heavy lifting instead? According to those of a monetarist persuasion, if the central bank increases the base money supply, output will be restored even if fiscal policy remains tight. So the protracted slump is the ECB's fault, isn't it?

The writer doesn't think so:


The other set of fallacies, of which I fear the influence, arises out of a crude economic doctrine commonly known as the Quantity Theory of Money. Rising output and rising incomes will suffer a set-back sooner or later if the quantity of money is rigidly fixed. Some people seem to infer from this that output and income can be raised by increasing the quantity of money. But this is like trying to get fat by buying a larger belt. In the United States to-day your belt is plenty big enough for your belly. It is a most misleading thing to stress the quantity of money, which is only a limiting factor, rather than the volume of expenditure, which is the operative factor.


And I'm sorry, Professor Krugman, but he doesn't have much time for arguments that deliberately raising inflation will magically restore output, either:

......too much emphasis on the remedial value of a higher price-level as an object in itself may lead to serious misapprehension as to the part which prices can play in the technique of recovery. The stimulation of output by increasing aggregate purchasing power is the right way to get prices up; and not the other way round".

And finally, he has harsh words for those who think that devaluing the currency is a fine way of restoring competitiveness and growth (I'm looking at ALL of those who argue for QE and its relatives on the grounds that it will weaken the currency):


"In so far as an over-valuation of the dollar was impeding the freedom of domestic price-raising policies or disturbing the balance of payments with foreign countries, it was advisable to depreciate it. But exchange depreciation should follow the success of your domestic price-raising policy as its natural consequence, and should not be allowed to disturb the whole world by preceding its justification at an entirely arbitrary pace. This is another example of trying to put on flesh by letting out the belt."

Now, of course, we have all learned SO much since John Maynard Keynes wrote this letter to Franklin D. Roosevelt, haven't we? These days, "Keynesian stimulus" is widely derided. The 1970s taught us that direct government intervention to restore growth is wholly wrong and very damaging, and Keynes was a charlatan to suggest it. We now know that the only thing that will restore growth is for government to remove obstacles to free trade and private enterprise while putting its fiscal house in order - even if this means unemployment of over 25% and rising poverty and malnutrition among the population. Don't we?

But wait. What exactly was Keynes criticising in this letter?


In particular, I cannot detect any material aid to recovery in N.I.R.A., though its social gains have been large. The driving force which has been put behind the vast administrative task set by this Act has seemed to represent a wrong choice in the order of urgencies.

Here's what FDR himself had to say about the NIRA:


"Throughout industry, the change from starvation wages and starvation employment to living wages and sustained employment can, in large part, be made by an industrial covenant to which all employers shall subscribe. It is greatly to their interest to do this because decent living, widely spread among our 125, 000,000 people, eventually means the opening up to industry of the richest market which the world has known. It is the only way to utilize the so-called excess capacity of our industrial plants. This is the principle that makes this one of the most important laws that ever has come from Congress because, before the passage of this Act, no such industrial covenant was possible.

"On this idea, the first part of the Act proposes to our industry a great spontaneous cooperation to put millions of men back in their regular jobs this summer. The idea is simply for employers to hire more men to do the existing work by reducing the work-hours of each man's week and at the same time paying a living wage for the shorter week."

The NIRA was a programme of labour market reforms and public works aimed at ensuring full employment at living wages. Those who think that this is what "Keynesianism" is about should study what Keynes actually said. Keynes was no Keynesian.

Now, it is true that Keynes was writing to the President of a currency-issuing sovereign, whereas Eurozone member states have voluntarily relinquished their right to issue their own currencies. But that does not invalidate Keynes' remarks about the importance of government spending. When private sector agents cannot or will not spend, government must enable them to do so. Keynes is not suggesting that government does it FOR them. He is recommending that private sector agents be provided with more money so that they can spend it themselves. He doesn't specify how that might be done, but helicopter drops, tax cuts and additional government spending funded by borrowing (not tax rises) are all possibilities. Anything, in fact, that increases the purchasing power of the private sector. And no, funny money is not a substitute, however cleverly it is designed. Nor is QE, really, since all it does is substitute one asset for another. John Muelbauer's "QE for the people" is far more in the spirit of Keynes than Juncker's scheme.

"Oh that today you would listen to his voice: harden not your hearts." - Psalm 95

(H/T @NelderMead for the link to Keynes' letter). 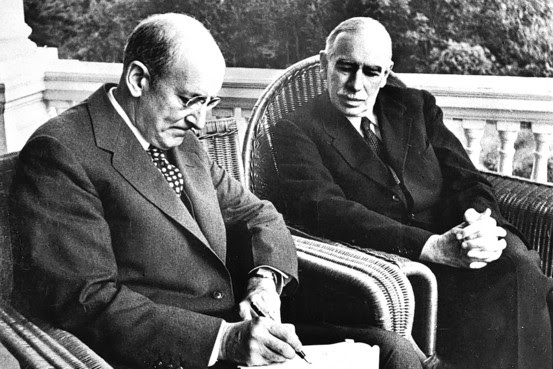