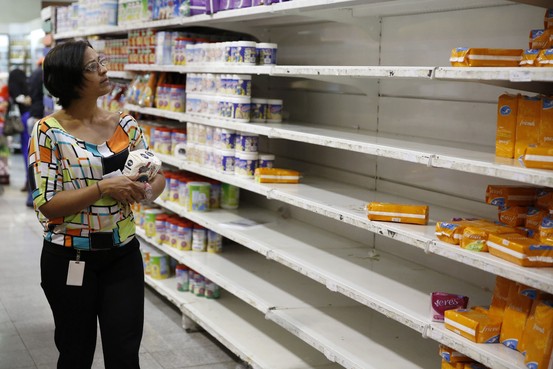 In my recent Forbes post about Venezuela, I said that neither the exchange rate policy nor the government's fiscal policy were sustainable, and the Maduro regime would eventually be forced to devalue and enact painful fiscal reforms. In the comments, Alexander Guerrero observed that it is already too late for this, because the economic mismanagement of the last few years has all but destroyed the supply-side of the economy: devaluation now would be likely to result in hyperinflation and default.

The tragedy is that what is playing out now in Venezuela has happened many times before. Those who do not learn from history are doomed to repeat it.....and nowhere is that more true than in Latin America. In this paper from 1989, Dornbusch & Edwards examine the reasons for the parlous state of Peru's economy at that time in the light of the economic collapse of Chile in the early 1970s. These comments set the scene (my emphasis):


Our purpose in setting out these experiences, those of Chile under Allende and of Peru under Garcia, is not a righteous assertion of conservative economics, but rather a warning that populist policies do ultimately fail; and when they fail it is always at a frightening cost to the very groups who were supposed to be favored......

We are struck by the strong similarities in Chile, Peru,and in other episodes not developed in detail here of the way policy makers viewed the objective conditions of their economy, how they proposed that strongly expansionary policies should and could be carried out, and how they rationalized that constraints could be dealt with. And, of course, we are impressed by the fact that in the end, foreign exchange constraints and extreme inflation forced a program of violent real wage cuts that ended in massive political instability, coups and violence.

But how does everything go so badly wrong?

Dornbusch & Edwards explain that the problem is a combination of factors:


The combination of external influences (debt crises,economic blockades etc.), domestic policies (socialization of firms, bank nationalization, etc.) and macroeconomic policies bring about an unsustainable economy where inflation is out of control, and the foreign exchange constraints force realism on policy makers.

And they go on to list the four stages of the unfolding disaster.


Phase I: In the first phase, the policy makers are fully vindicated in their diagnosis and prescription: growth of output, real wages and employment are high, and the macroeconomic policies are nothing short of successful. Controls assure that inflation is not a problem, and shortages are alleviated by imports. The run-down of inventories and the availability of imports (financed by reserve decumulation or suspension of external payments) accommodates the demand expansion with little impact on inflation.

Phase II: The economy runs into bottlenecks, partly as a result of a strong expansion in demand for domestic goods, and partly because of a growing lack of foreign exchange. Whereas inventory decumulation was an essential feature of the first phase, the low levels of inventories and inventory building are now a source of problems. Price realignments and devaluation, exchange control, or protection become necessary. Inflation increases significantly, but wages keep up. The budget deficit worsens tremendously as a result of pervasive subsidies on wage goods and foreign exchange.

Phase III: Pervasive shortages, extreme acceleration of inflation, and an obvious foreign exchange gap lead to capital flight and demonetization of the economy. The budget deficit deteriorates violently because of a steep decline in tax collection and increasing subsidy costs.The government attempts to stabilize by cutting subsidies and by a real depreciation. Real wages fall massively, and politics become unstable. It becomes clear that the government has lost.

Phase IV: Orthodox stabilization takes over under a new government. An IMF program will be enacted; and, when everything is said and done, the real wage will have declined massively, to a level significantly lower than when the whole episode began! Moreover, that decline will be very persistent, because the politics and economics of the experience will have depressed investment and promoted capital flight. The extremity of real wage declines is due to a simple fact: capital is mobile across borders, but labor is not.

To make their point, Dornbusch & Edwards provide the following charts of real wages for, respectively, Chile under Allende and Peru under Garcia. 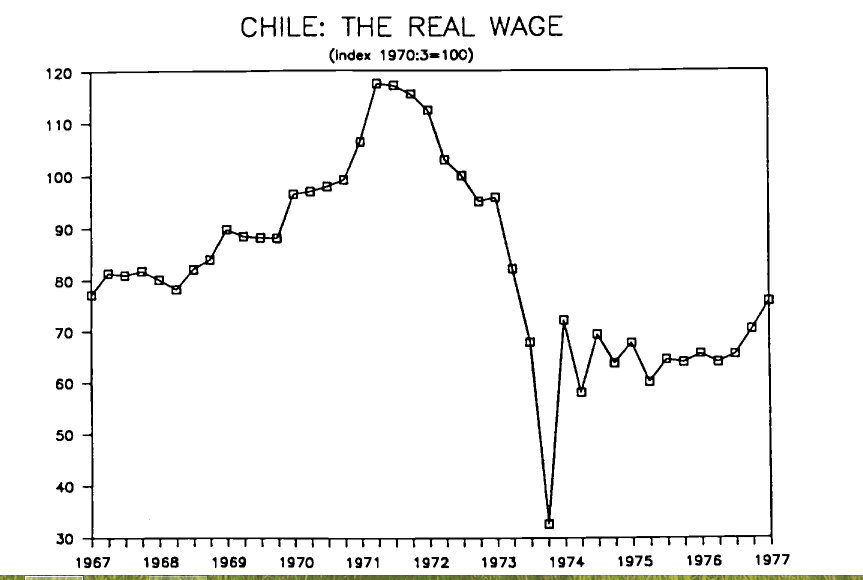 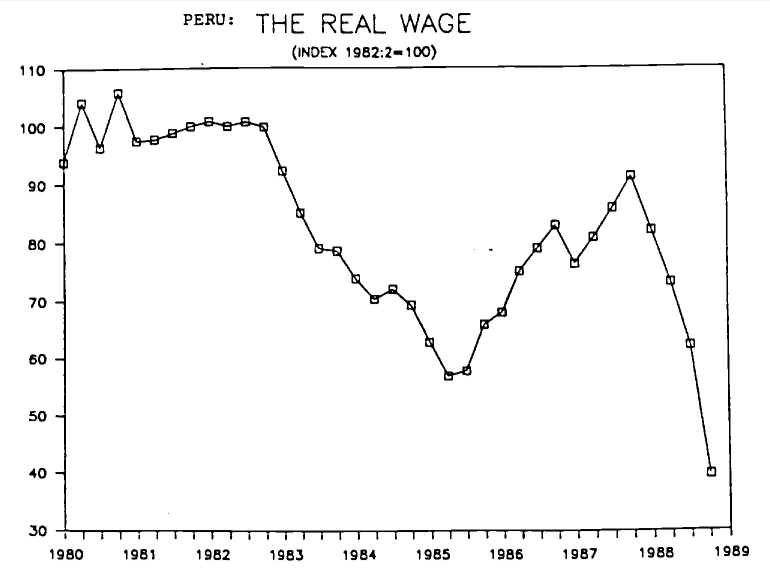 Remember that at the time they wrote, Peru's collapse was in progress. The pattern is clear. When the economy collapses under the triple burden of supply-side dysfunction, unsustainable fiscal finances and capital flight, the real wage falls to below its previous level. The inevitable IMF program restores stability, but at the price of stagnation, inequality and poverty for much of the population. And as Dornbusch & Edwards explain, therein lie the seeds of the next crisis:


Initial conditions: The country has experienced slow growth, stagnation or outright depression as a result of previous stabilization attempts. The experience, typically under an IMF program, has reduced growth and living standards. Serious economic inequality provides economic and political appeal for a radically different economic program.The receding stabilization will have improved the budget and the external balance sufficiently to provide the room for, though perhaps not the wisdom of, a highly expansionary program.

Policymakers explicitly reject conservative economic policies and implement highly expansionary policies designed to reduce inequality and eliminate poverty quickly, usually by means of large real wage rises.  I was struck by the beliefs that justify such dramatic reversal in policy, in particular the rejection of conventional economics: Chavez, Allende and their kind simply don't think that the rules of economics apply to them. And when it all goes horribly wrong, they blame external factors while exonerating the domestic policies that have enabled external factors to exert such a destabilising influence on the country. It is hardly surprising if investors do not wish to invest in countries where their investments are at risk of expropriation, or where their profits could be wiped out by large government-mandated wage rises or sudden tax increases, or where rising inflation erodes not only their returns but their capital. The loss of capital investment arising from these policies is probably the most damaging aspect, since it erodes supply-side capacity and directly causes precipitous real wage falls when the collapse eventually comes.

Having said that, it is not reasonable to blame expansionary "populist" policies for economic collapses without taking account of the role of the preceding harshness in setting them up. IMF programmes may stabilise the economy, but too often at the cost of real suffering among the population: the desire to improve their lot is entirely understandable. Austerity breeds profligacy, which in its turn is forced to give way to even more austerity. Rinse, repeat. This has been the story of Latin America for a very long time.

Venezuela is currently in Phase III. There are pervasive shortages, inflation is over 65% and rising, and foreign reserves are declining sharply despite Venezuela's trade surplus. The budget deficit is currently at 17% and rising. The economy is demonetizing rapidly as more and more transactions are done on the black market. To make matters worse, the US government has imposed sanctions on Venezuela for suppressing dissent. So far, the government has resisted devaluation and subsidy cuts, but it cannot do so for much longer. Maduro - never as popular as his predecessor - is resorting to bribing the population with unsustainable fiscal expenditures, but this will only hasten the economic collapse that now appears inevitable. Venezuela is headed for default, hyperinflation, disorderly regime change and a wrenching fiscal adjustment. And the people who will suffer - indeed are already suffering - are the poor that Chavez and Maduro set out to help, just as the poor in Chile and Peru suffered.

Alexander Guerrero's warning about Venezuela seems all too prescient:


To put it in few words, our fiscal situation is similar with the Russian one in 1989 at the fall of communism in Europe. It means we have to go for a unlimited privatization process, I know that politically there is no way to get it, but we are driving to that point, I just beg God, that everything happens in peace, I doubt it any way!.

But this is not wholly a Latin American story. Much of what is described here also applies to Greece. The only difference is that Greece is in the Euro, so hyperinflation is impossible and all the adjustment must come from brutal fiscal retrenchment and sharp falls in real incomes. But if it were to leave the Euro, or worse, be thrown out for non-compliance with Troika demands.....

Be careful what you ask for, Mr. Tsipras.

Who pulled the switch?

Image from the Wall St. Journal