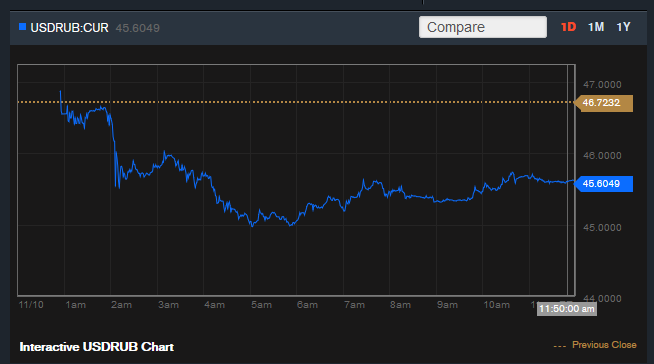 
After the Central Bank of Russia (CBR) established free float with the condition that it would intervene to protect domestic financial stability, the ruble immediately rallied, but then fell again. Many people forecast dire consequences. I admit I was a little worried, but I thought the ruble would stabilize once markets became used to the lack of routine intervention from the CBR. After all, the whole point of allowing a free float is to enable the currency to find its own level – and more importantly, restore control of monetary policy to the central bank.

When a country operates a fixed exchange rate system, it de facto adopts the monetary policy of whichever country issues the currency to which it pegs its own currency. In the case of the ruble, that is the United States. And as I have noted before, because China has large US$ reserves and a currency peg to the US$, the Fed’s policy is to a degree determined by the People’s Bank of China (PBOC). After all, a currency peg has two sides. It is unusual for the pegging country to influence the monetary policy of the country to which it pegs: usually a smaller, weaker country pegs its currency to a the currency of a larger, stronger country, and the larger country simply ignores the smaller one. But the US and China are now sufficiently close in size and strength to influence each other. Both also influence the oil price, and as Russia is an oil exporter, that has significant effects on the Russian economy. In effect, Russia’s monetary policy has until now been jointly determined by the Fed and the PBOC.


This means that the CBR has never really been in control of either the ruble or monetary policy.....

So how is it regaining control - and what might make it lose it again? Read on here.