By Frances Coppola - November 08, 2014
The Economist has an interesting graphic. Here are the world's 10 biggest banks year by year since 2004, apparently: 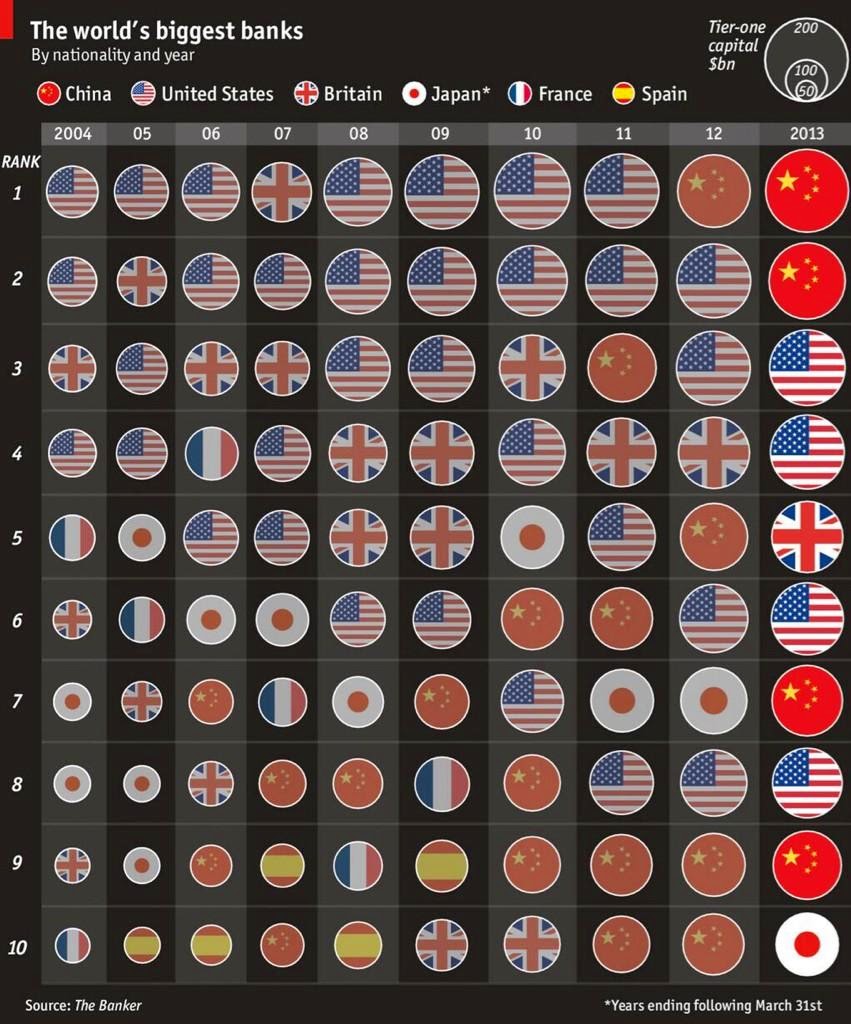 Umm, not quite. This graphic actually shows the banks with the largest amount of shareholders' equity (Tier1 capital) in US$. It says nothing at all about the absolute size of these banks in assets, and since the Tier1 capital is expressed in dollars rather than as a percentage of assets, it says absolutely nothing about the safety of these banks either.

Cross-checking the figures for 2013 against other metrics gives interesting results. Relbank reports that by assets, Britain's HSBC is the second largest bank in the world, but The Economist's list has HSBC in fifth place by Tier 1 capital. So it appears that its capital is deficient relative to China Construction Bank, JP Morgan and Bank of America. But the accounting treatment affects the definition of assets. In particular, there are significant differences between US GAAP and IFRS regarding the treatment of derivatives. The result is that US banks using US GAAP appear to have smaller asset bases than HSBC (and other European banks) that use IFRS. HSBC is apparently larger than JP Morgan - and has lower capital - because of differences in accounting treatment.Would that difference disappear if both banks were using the same accounting treatment? We don't know.

There are also differences in definition of Tier 1 capital. America's definition of capital is not the same as the UK's, and who knows how China defines "shareholders' equity". The treatment of preferred stock is particularly controversial.

So The Economist's chart should be treated with some care. Nonetheless, it shows how much the Tier 1 capital of the global banking system has increased in the last 10 years. The size of the circle indicates the size of the capital base of the bank concerned. In 2007 the largest bank in the world by capital was the British bank RBS, which was also at the time the largest bank in the world by assets. But the banks that have replaced it are much larger. The RBS of 2007 wouldn't feature on the list at all now. Indeed, European banks generally feature highly in the earlier years of the chart: French banks, and even Spanish banks, were in the top 10 banks in the world by Tier 1 capital. All have now disappeared from the list.

On Twitter, The Economist's chart was accompanied by a tweet that asked "How long before all the top 10 are Chinese?" It seems a reasonable question. After all, the Chinese economy will soon be the largest in the world, so it should have the largest banks - shouldn't it?

But we have played this scene before. Roll back the years to 1989, and we find this from the Chicago Tribune:


For the first time, the 10 largest banks in the world are all Japanese as Citicorp, the biggest U.S. bank, has fallen out of the top ranks, according to American Banker. Dai-Ichi Kangyo Bank Ltd. is Japan`s and the world`s biggest banking company, with assets of $387 billion at the end of March.

The remarkable growth of Dai-Ichi Kangyo Bank (DKB) came from increasingly risky real estate and construction loans made on the assumption that land prices would continue to rise. Yet by 1989, land prices were already falling in Tokyo - a sign of trouble to come. When the Japanese real estate bubble burst in 1991, DKB found itself with high levels of non-performing loans. Nor was it alone. Almost all of the large Japanese banks ended up with disastrously high levels of non-performing loans, mostly real estate, after the 1991 crash. They limped along until 1997, hiding the true state of their balance sheets, until the Asian crisis hit in 1997. That was enough to cause the failure of the most vulnerable banks, notably Hokkaido Tagushoku Bank, Long Term Capital Bank, and Nippon Credit, along with securities companies Sanyo Securities and Yamaichi Securities and a number of smaller institutions. The rest, including DKB, were forcibly restructured by the Japanese authorities. DKB eventually merged with Fuji Bank and Industrial Bank of Japan to form Mizuho Banking Corporation.

There are other disturbing similarities between the Japan of the late 1980s and China today. The Japan of the 1970s and 80s was an export powerhouse, with a large trade surplus which the US claimed was due to artificial repression of the yen. Sound familiar? The Plaza Accord of 1985 forced the yen to appreciate against the dollar. But although that caused a short recession in Japan, it didn't end its trade dominance. The US's trade deficit remained stubbornly high and Japan continued to "fund the US deficit" by buying USTs - just as China does today. In fact Japan's purchases of USTs were an inevitable consequence of its trade surplus, just as China's are today. Neither country is remotely interested in funding the US's fiscal deficit - but they do like to have plentiful dollar liquidity.

But Japan's growth came to an abrupt end with the bursting of the asset bubble in 1991 and the collapse of its banking system in 1997. Now, after more than two decades of stagnation, no-one is interested in learning about Japanese business. China is the new powerhouse. Chinese businesses are taking over the world. MBA students are taught about Chinese business. Some of them even learn Mandarin. Hmm.

What makes us think this time will be different?