When the Nile floods fail 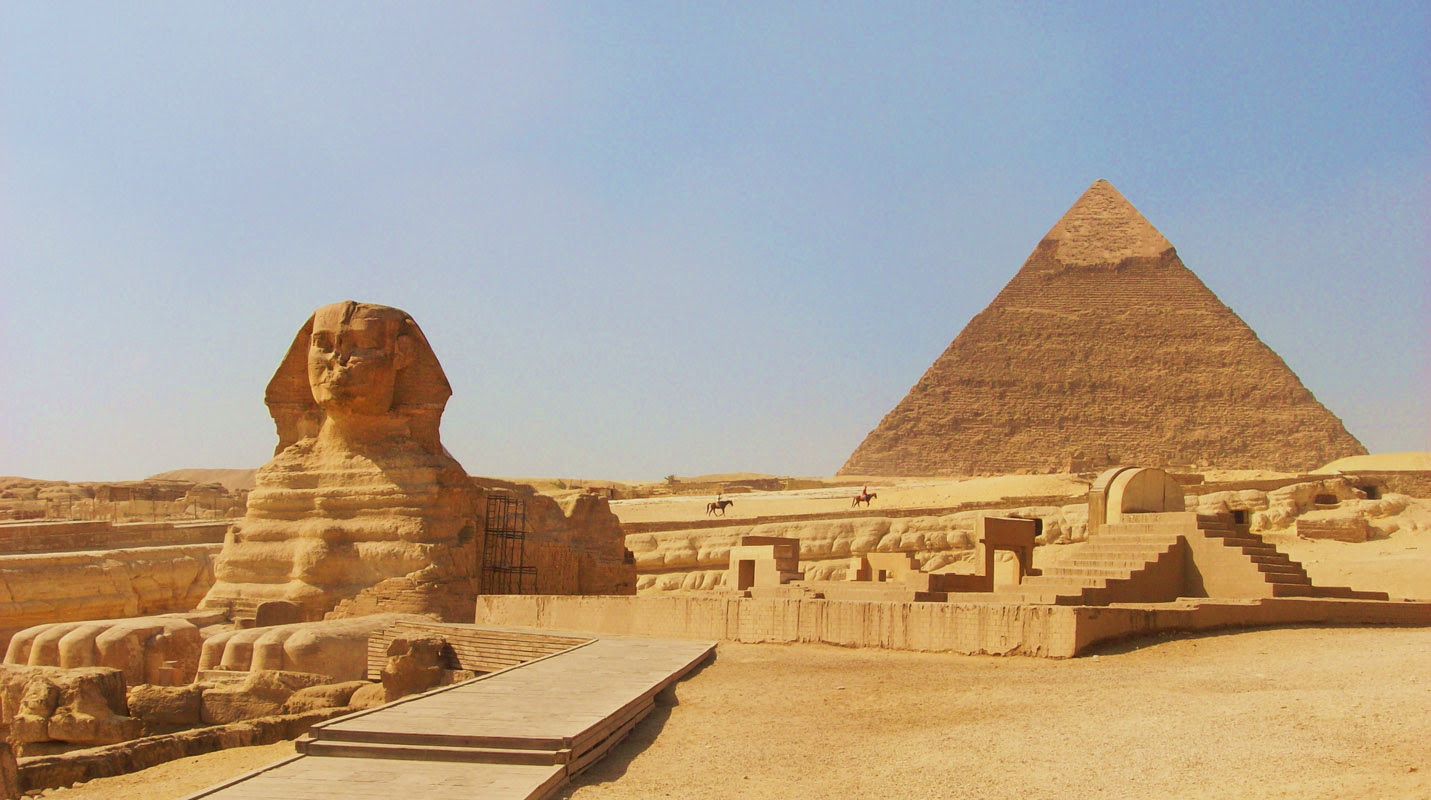 I recently watched a BBC documentary on the fall of the Egyptian Old Kingdom. A thousand years of stability and prosperity came to an abrupt and chaotic end, apparently out of the blue. Most Egyptologists blamed dynastic change and political unrest. But something didn't quite add up. The end of the Old Kingdom coincided with terrible famines. To be sure, conflict can cause famines. But these were exceptional: thousands of deaths for years on end, people resorting to cannibalism, whole cities being abandoned.

New research cast doubt on the "political change" theory for the collapse of the Old Kingdom. Sudden catastrophic climate change occurred at that time, causing a mini Ice Age in Europe and widespread famine around the world. In Egypt it resulted in the total failure of the annual Nile floods, upon which the Egyptian economy critically depended. No wonder it collapsed. But it took archeological research over 4000 years later to identify the massive exogenous shock that caused the sudden collapse of a great civilisation. People at the time would not have known the cause. And they certainly would not have expected the Nile floods to fail. They had not done so for a thousand years.

The financial crisis of 2008 was certainly not a disaster of that magnitude. But it displays some similarities. The US housing market had been stable for 70 years. And because of its stability, the US economy had become critically dependent on it. Indeed not only the US economy, but since the advent of securitization also the global economy, had become dependent on the US housing market. Like the Nile in Ancient Egypt, it was the safe, familiar, predictable source of prosperity. Via its derivatives, the world bought into its safety and stability.

Then it failed suddenly and catastrophically. We still don't know exactly why, but the work of Mian & Sufi on the huge increase in debt backed by housing is important, and Steven Gjerstad & Vernon Smith's analysis of the root causes of the failure of the US housing market is impressive. Interestingly, among other things, Gjerstad & Smith show that there has been a housing market collapse of that magnitude before. Just as failure of the Nile floods had no doubt happened occasionally before the fall of the Old Kingdom (it has happened once or twice since), but had disappeared from memory, so Gjerstad & Smith show that failure of the housing market was a primary cause of the 1930s Great Depression. But we have forgotten about this. Time and wishful thinking create amnesia.

The people of the Egyptian Old Kingdom and the people of the modern global economy made the same mistake. They believed that something was predictable when it was in fact unpredictable, safe when it was risky, certain when it was uncertain. Nile floods vary in magnitude from year to year, and from time to time there are transient agricultural failures when the volume is too low. Small shocks of this kind can be accommodated within a stochastic model: there is short-term disruption but the economy soon returns to "normal". But total failure of what has previously been considered "safe" is traumatic. The Egyptian economy did not return to "normal". It entered a dark age that lasted perhaps a hundred years. And we, too, are now in a dark age: we do not yet know how long it will last.

Despite the clever models of modern economists, we are no better at predicting extreme events than our ancestors. We make the same mistakes, and frankly with much less justification. It took a thousand years of prosperity to lull the Egyptians into a false sense of security. But less than a hundred years ago we were living through the greatest destruction of physical, financial and human capital in recorded history. You would think we would be alive to the possibility of extreme events. But instead, we convinced ourselves that we had had fixed all the problems and there would never be extreme events again. We thought we could control (human) nature. How wrong we were. As ever, Hubris invites Nemesis.

Here's Olivier Blanchard of the IMF describing the hubris of mainstream US economics:

The priests believed their own oracles because the Nile floods didn't fail.

Blanchard goes on to describe the limitations of economic oracles models and the unrealistic beliefs of economists:


The techniques were best suited to a worldview in which economic fluctuations occurred but were regular, and essentially self-correcting. The problem is that we came to believe that this was indeed the way the world worked......We in the field did think of the economy as roughly linear, constantly subject to different shocks, constantly fluctuating, but naturally returning to its steady state over time. Instead of talking about fluctuations, we increasingly used the term ‘business cycle’. Even when we later developed techniques to deal with nonlinearities, this generally benign view of fluctuations remained dominant.

That small shocks could sometimes have large effects and, as a result, that things could turn really bad, was not completely ignored by economists. But such an outcome was thought to be a thing of the past that would not happen again, or at least not in advanced economies thanks to their sound economic policies.

The Nile floods can never fail because 1) our models haven't considered that they might (and we don't know how to model such an event) 2) sound economic policies will ensure that the Nile floods never fail.

You couldn't make it up.

The trouble is that economists are using essentially linear models to explain and predict a non-linear world. Hahn's description of Blanchard's models as "Mickey Mouse" is all too accurate. Economic models that only work as long as nothing goes seriously wrong are about as useful as a windsock in a typhoon. Something goes seriously wrong somewhere in the world quite a lot of the time. Nassim Taleb's criticism of statistical models used by economists is cutting:


The simple argument that Black Swans and tail events run the socioeconomic world - and those events cannot be predicted - is sufficient to invalidate their statistics.

Blanchard admits that omitting the financial system from economic models was a major error. I totally agree. But incorporating it into existing models, or developing new systemic risk models to run alongside existing macroeconomic models as Blanchard suggests, won't solve the problem. As the story of the Egyptian Old Kingdom shows, tail events pose the biggest threat to our civilisation. But we can't model them. We can only model things we know about. Now we know about the systemic risks that the financial system poses, we can model them. And we can stay away from the dark corners where those systemic risks lurk. But those are not the only dark corners, and the problem is that we can be so focused on avoiding yesterday's dark corner that we fail to notice tomorrow's bigger and darker one.

And therein lies the problem with Blanchard's recommendation that we should "stay away from dark corners". The dark corners we really need to stay away from are those we don't know about. And modern economics has no credible way of modelling those, any more than the priests of Ancient Egypt did. Who in the Old Kingdom would have predicted the failure of the Nile floods? Would they have been believed? What changes could the Egyptians have made to their economy to enable them to survive such a disaster?

In fact Blanchard's argument is deeply flawed. He acknowledges that existing economic models are fundamentally inadequate, but then calls upon policy makers to set policy in such a way that existing economic models can still be used. This amounts to saying that policy makers can prevent tail events and Black Swans from happening. Sound economic policies will still prevent the Nile floods from failing......

It seems that Blanchard still believes that the economy can be made to work linearly if only policy makers get it right. I suppose it is hard for someone who has spent his life developing linear models of the economy to accept that the economy is fundamentally non-linear and the models are not fit for purpose. But economic models that are not fit for purpose should not be used. Because they lull people into a false sense of security, they are not only inadequate, they are dangerous. Better no model at all than one which steers you on to the rocks.

Our best guide to managing the disasters of the future is the experience of the past. Anthropology, archeology and ancient history, as well as the natural sciences, have much to teach us about how our world really works. It would help if mainstream economists were more aware of the limitations of their mathematical models and more willing to embrace heterodox thinking. But it would be better still if, as Piketty says, they gave up their "childish obsession with mathematics". The proper study of economists is not mathematics. It is natural and social history.

We need to learn from the past, but look to the future.