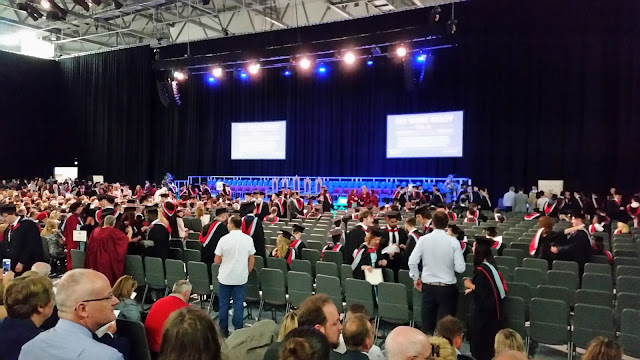 Last week, I went to my son's graduation ceremony. He has just completed a B.Sc in sound & light echnology at Derby University. So he is one of the STEM (Science, Technology, Engineering and Mathematics) graduates that we are told this country so badly needs.

As I watched the graduates from the College of Engineering and Technology walking past the dignitaries on the stage, I became aware of a huge gender gap. The vast majority of the young people filing on to that stage were boys. I calculated that only about 16% were girls, and they were concentrated in architecture, computer animation and - above all - mathematics. A number of disciplines, notably civil engineering, electrical engineering and most branches of computer science, had no girls at all.

I asked my son about this. He doesn't have an answer. But he commented that even in his own discipline (sound & light engineering), of 34 people who started the course, only five were girls. However, all five girls graduated, three of them with first-class degrees: one was a prize winner. In contrast, nearly half the boys did not graduate.

I don't know what the drop-out rate was in other disciplines. But it was apparent from the listings that girls punched well above their weight. Girls were disproportionately recipients of first-class degrees, relative to their numbers: and nearly half the College's prizewinners were girls.

A possible answer lay in the second half of the ceremony, where graduates of the College of Health & Social Care received their awards. Here, the gender gap was reversed - and it was even wider. The graduates were overwhelmingly female. Of 182 graduates, only 20 were boys - less than 11% of the total. Unlike engineering, where girls seemed to gravitate towards certain disciplines, the few boys were scattered evenly across all disciplines.

Again, I wondered whether there was an element of self-selection going on. Do "average" boys tend to gravitate towards engineering, while "average" girls tend to graduate towards the caring professions? If so, then we would expect boys in Health & Social Care to be disproportionately able compared to girls.

Sadly, that is not the case. The boys in Health and Social Care were no better than the girls - in fact if anything, they were worse. Only four boys achieved first class degrees, and of seven prizes, only one went to a boy. It seems likely that there are other factors discouraging boys from going into nursing, social work and various forms of therapy. I suspect there are social factors at play. For example, even now, nursing is seen as a woman's job. A very able boy would be subtly pushed towards medicine rather than nursing. Similarly, boys who might make exceptional therapists could be pushed towards psychiatry. This might explain why the boys in this college did not demonstrate the exceptional performances of the girls in the Engineering college. And it might also explain why there were so few of them.

Now, of course this is only one university, and Health & Social Care is not the only non-STEM discipline that could attract young people of both sexes. But what I want to draw from this is our asymmetric and irrational social expectation of boys and girls.

STEM subjects are by no means the sum total of our skills needs. Increasingly, in the future, we will need people whose job it is to care, skilfully and professionally. So why do we talk endlessly about the need to encourage girls to study STEM subjects, but never, ever, encourage boys to work in health and social care? Why do we still assume that caring is a woman's job?

Photo taken by me shortly before the start of Derby University's graduation ceremony in the Derby Velodrome.