By Frances Coppola - March 08, 2016
The sun is shining, the daffodils are flowering. Blossom is on the trees. The dark days of winter are behind us: in front of us lies a bright, glowing spring. Black zeros reap golden rewards, it seems.

What is all this about? German industrial production has suddenly bounced back from recent falls, rising by 3.3% month-on-month in January 2016. The German statistical agency DEStatis reports that there are particularly strong performances in construction, capital and consumer goods production:

According to Dominic Bryant of BNP Paribas (quoted in the FT), Germany is "booming". And in the same FT piece, Pantheon Macroeconomics describes the report as "extraordinary" - a "very strong report with a surging headline". Wow.

But hang on. This chart from DEStatis shows German industrial production since 2008: 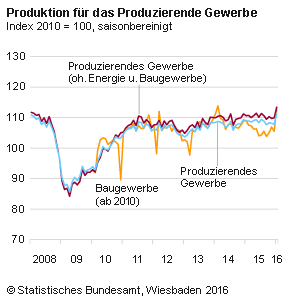 Forgive me, but I am struggling to see any boom here. As far as I can see, German industrial production (blue lines) has been essentially flat since 2011. Taking out energy and construction makes little difference: the red line is flat too. To be sure, there is a tiny uptick in both lines at the far right of the chart, but this could simply be a statistical blip. And that wonderful rise in construction (orange line) is merely recovering the ground that has been lost since 2014. Really, there is nothing to look at here.

In fact it is worse than that. This chart from Capital Economics tells of the dangers of premature rejoicing: 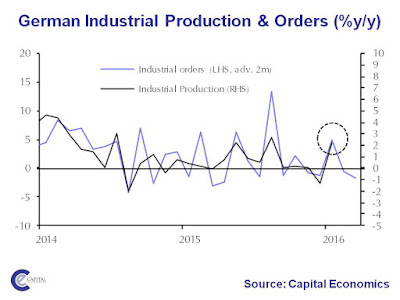 The glowing figures in DEStatis's report come from the point circled on the chart. But industrial orders tell a different story. On Twitter, Capital Economics explained that this high point reflects the spike in industrial orders two months earlier - the normal lag - which has since been reversed. We might see industrial production figures rise a little higher yet, but they will then fall back.

To be sure, Dominic Bryant and Pantheon Macroeconomics both express some caution over DEStatis's figures. But both seem to think the figures say more than they actually do. There is no reason whatsoever to suppose that they presage a lasting recovery. To the contrary, Capital Economics's chart suggests that the underlying trend is actually downwards.

Spring is very short-lived in Germany.