Who would win and who would lose from Grexit? 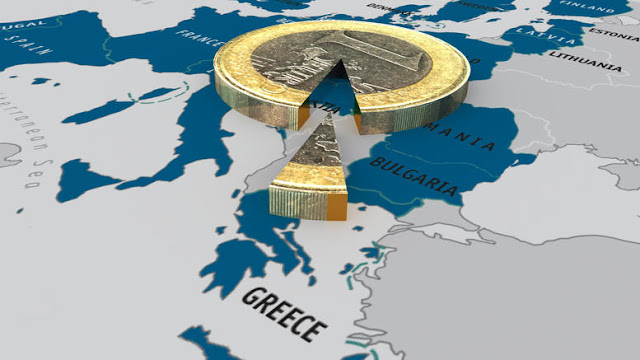 Vladimir Illych Lenin may well be the most destructive political theorist of the 20th century.  His glorification of a conspiratorial party as agent of a glorious future legitimised mass murder from Bolshevik Russia to Nazi Germany to Cambodia's Khmer Rouge.  Nonetheless, he did invent an analytical tool political scientists and economists should use more often: “Kto Kovo”, or “who beats whom”.  In examining any policy, Lenin suggests the first question to ask is who gains and who suffers.

Neoclassical economics pretends that we search for an optimum solution that serves the economy as a whole. In truth, all change creates winners and losers.

The most obvious example is currency appreciation.  If the dollar is strong and its value rises against the euro, then American tourists enjoy nicer vacations, able to eat and drink more luxuriously for less money, but American exporters pay the price.  The cost of their goods in euro rises, so unless they cut their margins they will sell less product.  The public generally favours a strong currency, thinking it demonstrates the vigour and vitality of the economy; but economists know a weaker currency can create jobs by increasing sales overseas, reducing imports relative to exports.

Inflation has a terrible reputation amongst the general public but for most it is relatively painless. If you hold your wealth in cash, inflation is your enemy.  If you own real assets, it doesn’t have to be a problem. For those of us who are net borrowers (and most of us are), inflation is beneficial in that it reduces the real value of our debts. That is why creditors despise it: inflation allows debtors to pay them back in depreciated currency.

Keynes, in Essays in Persuasion, tells us inflation is beneficial to entrepreneurs, who must make their product before they can sell it.  Since their costs are in period 1 and their sales are in period 2, inflation increases their profits.  Net lenders, like banks and bondholders, are the most damaged by inflation. It is a sign of their dominion over economic debate that the public fear it as much as they do.
Inflation need not hurt workers.  The inflationary 1970s saw real wages grow more than they have in any decade since.  In the 1970s, wage inflation exceeded goods inflation, so most people were better off.  Today, with unions eviscerated and worker power a joke, goods inflation would probably not spark wage inflation.  That tells us that an inflationary spiral is almost impossible, but it also means that inflation today might not be as benign to workers as it was in the 1970s.

The economics blogosphere hates austerity as much as the average citizen hates inflation. Everybody but the ECB, George Osborne and the general public recognises that tax hikes and public service cuts reduce demand, slow the economy and increase unemployment.  Austerity in a stagnant economy is as sensible as bleeding a sick patient in the hope of extracting evil humours.  Austerity hurts workers and entrepreneurs. It slows the economy today and reduces investment for tomorrow. Why then is it still so popular? Partly it is because austerity, although wrong headed, does make intuitive sense. “When times are hard and families are tightening their belts, government must as well” is a snappy sound bite, even if contradicted by 80 years of macroeconomic knowledge.

Austerity, as historians of the IMF knowwell, is the creditors’ preferred policy in the aftermath of every financial crisis.  Creditors naturally want debtors to reduce their expenses so as to free up cash flow for debt service.  If you have borrowed money from your brother-in-law, he doesn’t want you to take a lavish vacation or aspire to an early retirement. Likewise, if a German bank is lending to the Greek government, it does not care if pensioners starve and civil servants lose their jobs as long as cash is made available to service the debt.

Bondholders are generally rich.  Rich people make most of their money from their investments, not from their labour, so rising unemployment has little effect on them.  Thus they are insulated from the costs of austerity. What bondholders fear is inflation, in being repaid in depreciated currency.  Increased government spending could be inflationary, and it could also damage the government’s credit rating, which would affect the value of existing bonds.

This may explain the popularity of austerity, even though it has been disproved both in theory and practice. Michael Kalecki remindsus that “Obstinate ignorance is usually a manifestation of underlying political motives.” The passion for austerity is not merely misguided. It persists because it serves the interests of the rentier class.

So far so simple.  Let’s try a trickier one. “Grexit” is terrifying. If it sparks contagion, it could plunge Europe and the world back into recession. Most pundits assume it would be an unmitigated disaster. But remembering Kto Kovo, it is worth contemplating who would suffer and who would gain from Grexit.

The most obvious loser is anyone with euros in a Greek bank. If Greece exits the common currency and replaces euro deposits with drachma, and the drachma inevitably falls in value, then the value of those cash deposits would plunge as well. No wonder the Greek middle class fears leaving the euro. Their savings, sitting in their bank accounts, would be devastated.

Of course, most rich Greeks have already shifted their euro deposits out of Greek banks into institutions in Switzerland or Germany. After Grexit, their euro holdings would remain constant while their drachma costs would fall. As Greek banks collapsed and Greek businesses struggled to access capital, some would inevitably need to sell assets to raise cash.  As a flood of middle-class assets hit the market, their price would collapse and rich Greeks sitting on euros would sweep in and buy them for a song. The rich who liquidated their Greek bank accounts in time could end up the big winners from Grexit.

Foreign tourists and investors would also gain from a weak drachma. Vacations in Greece would be cheaper, as would buying property and businesses. Increased tourism and more competitive exports would create jobs, lowering the 27% adult unemployment and 50% youth unemployment created by five years of austerity.

Greek pensioners and civil servants, hammered by austerity, would get a break. With Greece once again in control of its own currency, the Greek government would finally be able to enact a simulative monetary policy, and that should provide a boost to workers and entrepreneurs.

German workers, on the other hand, wouldn’t do well from Grexit, especially if other periphery countries followed suit. The value of the euro has been held down because of stagnation in the southern periphery. The weak euro has been enormously stimulative for Germany’s export sector. As the Eurozone shrank down to a German core and the euro rose in value, becoming more like a renascent Deutschmark, German exports would shrink and German jobs would disappear.

German taxpayers would also lose. The money they lent Greece, or more accurately the money used to buy Greek debt previously owned by German and French banks, will probably never be paid back.  Which reminds us of perhaps the biggest winner of all.

Every financial crisis ultimately is caused by creditors lending more than borrowers can repay. Both borrowers and lenders hope to make the other shoulder the cost of that imprudent lending. Had Greece defaulted and left the euro in 2010, the German and French banks holding their debt would have failed. The austerity of the past five years was the price of shifting debt from private sector banks on to the balance sheets of public institutions. German taxpayers have taken the hit - but German banks have not. Perhaps that helps explain the last five years.


Tom Streithorst is an American in London who has been writing for magazines on both sides of the pond since 2008. He is currently working on a book on post scarcity economics.