By Frances Coppola - May 25, 2015
At the end of my previous post, I posed the question: why did Latvia experience the deepest recession in the world in 2008-9?

The first puzzle is that Latvia's banks were in no worse shape than anyone else's and better than some. Among small countries, Iceland, Ireland and (in 2013) Cyprus all experienced bigger banking collapses relative to the size of their economies than Latvia. Larger countries did too, notably Germany and the UK, both of which suffered widespread damage across their large and arguably over-developed banking sectors. In the US, the big banks were bailed out, but literally thousands of small ones failed.

To be sure, Latvia did not escape unscathed: its second biggest bank, Parex, failed and was nationalised, and three other banks needed liquidity support. But that's really not sufficient to cause a recession of such magnitude. The 1995 crisis was much larger, but did not have anything like so great an economic effect.

The chart below shows Latvia's long-run GDP growth rate (source: World Bank). Don't be distracted by the extraordinary fall in GDP in 1992: I've included that for context. We may think the 2008-9 recession was terrible, but Latvia had experienced far worse within living memory.

Consumption was driven by fast-rising wages:

And industrial production declined, particularly from 2006 onwards. So it's not just that Latvians were consuming more, they were producing less:

So where did they get the money?

It's an all too familiar story. Inflows of foreign capital, mainly from Scandinavian banks, attracted by low interest rates and a population hungry for credit - credit advanced, of course, against property. Latvian house prices soared and there was a construction boom. Easy credit, wealth effects and incomes from construction and real estate activities also fuelled a consumption boom: suddenly Latvia, one of the poorest countries in Europe, was flooded with Porsches and Bentleys.

But Latvia was not the only Baltic state to experience a house price boom. All three states did. And  the "housing affordability" index (house prices versus GDP per capita) for all three suggests that the property boom was on a similar scale in all three states - indeed Lithuania's was slightly larger: 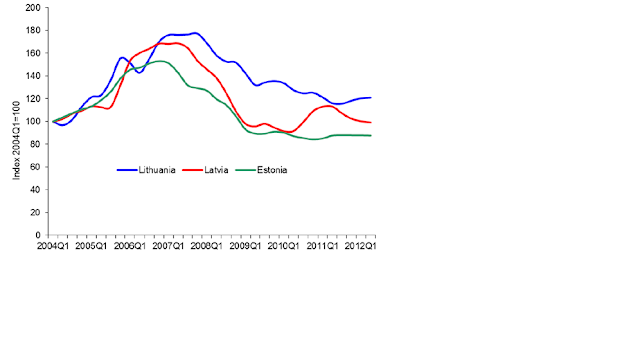 It is evident from this chart that Latvia's property bubble burst more explosively than either Lithuania's or Estonia's. Property prices fell by 60% between 2009-10. We now know that such enormous property market collapses have devastating economic effects. This is of course the cause of Latvia's dreadful recession.

But why did the bubble burst so explosively? The answer is in this chart, which shows the house price to rent ratio: 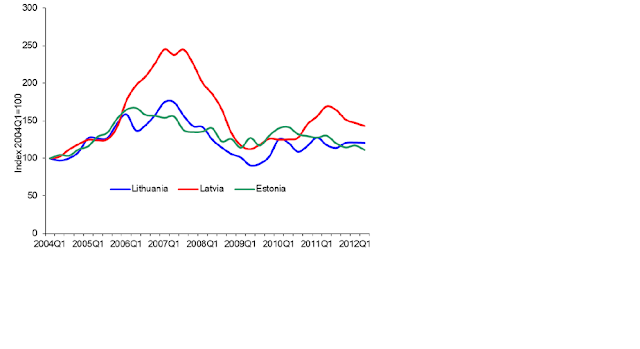 There was evidently a large wedge between house prices and rents in Latvia, which did not exist in the other states. The "housing affordability" chart is thus misleading. The house price rises were actually far more "unaffordable" in Latvia than in the other two states. This suggests that Latvia had higher inequality.

And indeed it did: 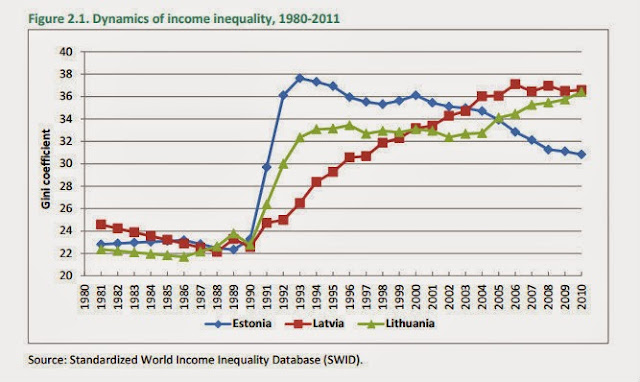 All three states had high inequality, a legacy of  their abrupt transition to a market economy in 1990. But Latvia's was the highest.

This explains why a property and construction bubble driven by excessive cross-border lending by Scandinavian banks was so devastating. Many Latvians were much poorer than the GDP per capita figures suggest, and it is these poorer Latvians to whom the Scandinavian banks were lending. But these generally poor Latvians were highly sensitive to interest rate rises and tightening of credit conditions. When they stopped borrowing, they stopped spending, and the economy collapsed.

I have never seen anyone draw a connection between inequality levels and severity of financial crises when property bubbles burst. Yet it is clear to me, at any rate, that Latvia experienced the worst recession in the Western world because of high inequality in a generally poor country. Had income been better distributed among the population, and credit less well distributed, the damage would not have been so great.

And this raises a question. Is the association between inequality and severity of recession peculiar to Latvia, or is it robust across other countries too?

If it is, then it raises a serious question about our approach to economic reform. Reducing inequality and stabilising household incomes may be at least as important for financial stability as limiting the availability of credit.

Clearly, more research is needed on the relationship between inequality, poverty and financial crises.

UPDATE: It seems I haven't been keeping up. In their paper "Inequality, Leverage and Endogenous Default", IMF researchers Kumhof, Ranciere & Winant consider exactly the same issue in relation to the US. This chart says it all, really: 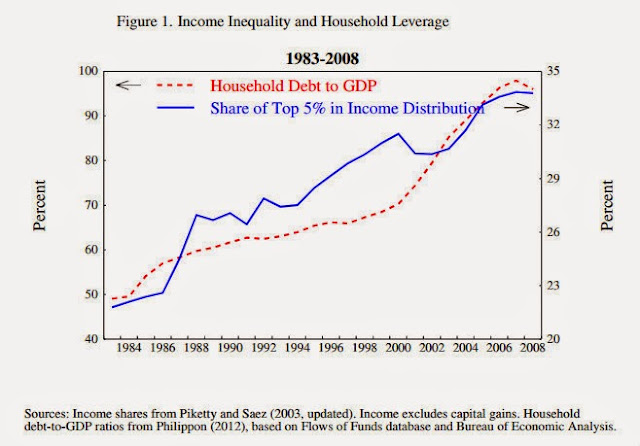 And for those who don't want to believe that there is any connection between inequality and leverage, the authors have also produced the same chart for the US up to the Wall Street Crash: 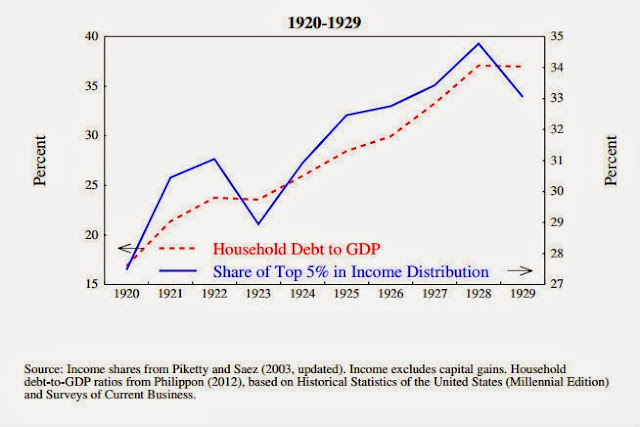 The US suffered an even larger GDP contraction than Latvia (29%) in the ensuing Great Depression.

For those who don't want to read academic papers, the authors have helpfully provided a blogpost on VoxEU as well.