By Frances Coppola - March 06, 2014
As I noted in my previous post, business lending in the Eurozone is very poor - flat in the major core countries and falling in the periphery. The ECB's report on MFI lending to businesses and households for January 2014 confirms the fall in business lending volumes both on a monthly and a yearly basis:

(For some reason the ECB doesn't include loans of 0.25 - 1 million euros in this table, but volumes of these loans are also falling. The full list can be found at the end of the ECB's document.)

The ECB also reports that interest rates are rising for smaller loans and falling for larger ones.

But as usual (I'm getting slightly tired of saying this), Eurozone aggregates don't tell the whole story. This chart shows the path of SME interest rates since the start of the Euro: 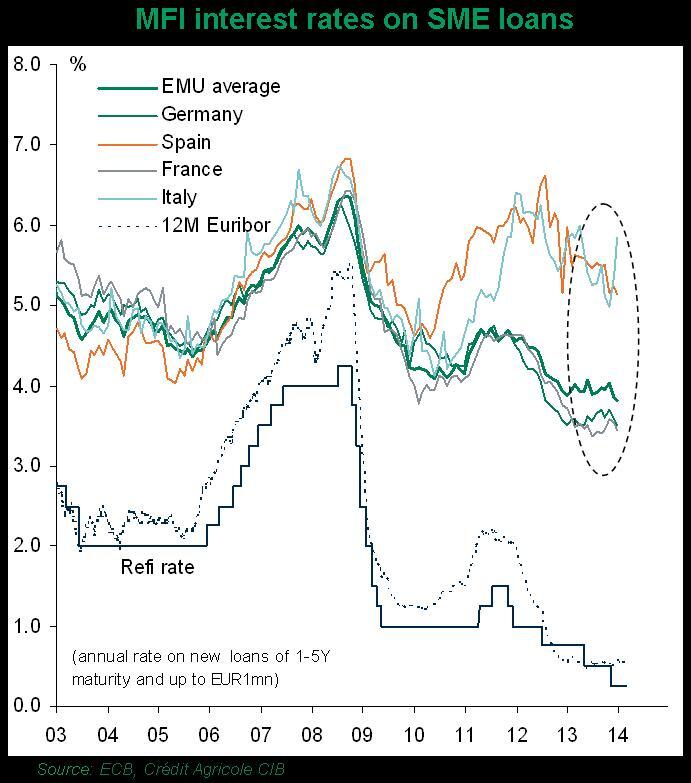 I wasn't able to find the source of the data for this chart, despite @fwred's comment that it was ECB data, but it seems to be to do with the amount and duration of the loan. Here is the table of loans to non-financial corporations from the ECB's document: 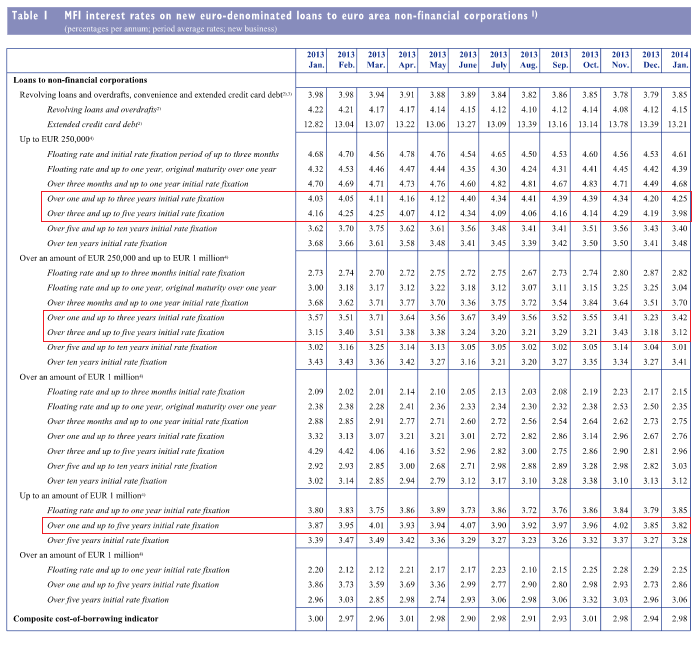 I've outlined in red those that correspond to the "EMU average" line on the chart. For those loans, the average interest rate has indeed fallen, both month-on-month and year-on-year. But overall, the composite cost of borrowing is rising, not falling. There is nothing to be cheerful about yet.

However, despite its limited data set, this chart is still informative - indeed fascinating. Firstly, average interest rates on this particular subset of MFI loans to German, French and Spanish SMEs are falling, but Italy seems to be heading in the opposite direction. This is probably due to its government shenanigans. It's hardly a stable political situation.

The reason for this is undoubtedly bank perception of higher risk. It's easy to blame elevated sovereign risk in these countries, and that might indeed be a factor. But so might this:

Banks are certainly under pressure to reduce higher-risk lending and improve their capital positions. The forthcoming Asset Quality Review is the latest in a long line of attempts to cajole or coerce banks into cleaning up their balance sheets. Unfortunately SME lending, which is generally fairly high-risk, tends to be badly hit when bank regulation is being tightened. And lending to SMEs in damaged periphery countries is about the riskiest form of lending there could be. No wonder SME lending volumes in periphery countries are falling off a cliff and interest rates are much higher than in core countries.

It cannot be assumed that companies that are being forced out of business by lack of finance are all "zombie" companies that should be allowed to die. As Tom Papworth of the ASI notes (in relation to the UK, but the same applies in the Eurozone), some of the companies that struggle to get finance are the new generation of startups....and if they die in infancy, then the future of the economy is compromised:


To terminate these firms in a misguided belief that capital and labour needs to be reallocated would be to kill the next generation of firms and undermine the process of creative destruction.

If it is true that the combination of recession, fiscal austerity measures and tightening of bank regulation is causing a severe credit crunch for periphery SMEs, then it seems appropriate for targeted support for SME lending in periphery countries to be provided at EU level, most appropriately by the ECB. After all, both sovereign and bank reforms are being done at the behest of the European Commission with the intention of restoring sustainable growth in the long-term. Killing off the very companies that will be needed to secure that sustainable growth is folly.

There is a desperate need to ease credit conditions for SMEs in periphery countries. The slight easing of interest rates on certain categories of loan for Spanish SMEs is welcome, but it is nowhere near enough. The EU must find ways of improving access to finance for SMEs in periphery countries. The future of those countries, and perhaps even of the Eurozone itself, depends on them.