Can labour markets be too flexible?

"Krugman has an interesting article in the New York Times. In it he suggests that when interest rates are at the zero lower bound and therefore (in an economy where physical cash is still important) unable to fall further, there is effectively no floor to aggregate demand. Here are his charts showing the difference between an economy where interest rates can fall and one where they can't. 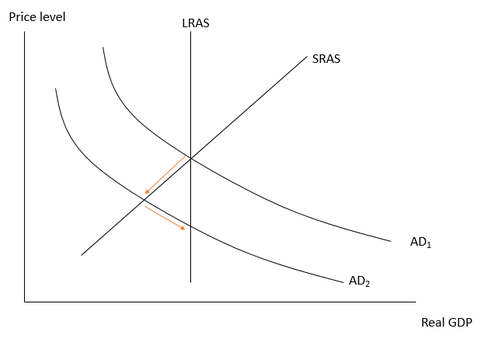 Krugman explains this chart as follows:


"Suppose aggregate demand falls for some reason, say a global financial crisis. Then what the textbook says happens is illustrated by the red arrows. First the economy contracts, then, over time, it expands again as prices fall. And this leads to the notion that demand-side stories are all bound up with the assumption of price stickiness......... you should think though the mechanism by which flexible prices supposedly restore full employment. In the picture I just drew, the answer is that you slide down the AD curve. But why is the AD curve downward-sloping? Any plausible story runs through interest rates: either you have a fixed nominal money supply, so a rise in the real money supply drives rates down; or you have in mind some kind of stabilizing policy by the central bank." 
"Falling prices can’t reduce interest rates, so it’s hard to see why the AD curve should slope down....and in fact, because falling prices worsen the real burden of debt, it’s a good bet that the AD curve slopes the “wrong” way. "

For non-wonks, that means if real interest rates are too high and are unable to fall, falling prices and wages drive the economy into depression. Let me explain what that means in relation to the Eurozone periphery.

In most advanced economies, central banks have been using unconventional monetary tools such as QE to depress real interest rates. The jury is out on how effective these tools are at achieving that, but it is fair to say that countries such as the US and UK have not experienced the disastrous economic collapse that the Eurozone periphery countries are currently going through.

In contrast, the ECB has not eased monetary conditions for the distressed periphery countries. In fact it is currently tightening them as LTROs are repaid. The difference in real interest rates between core and periphery is substantial, and this has a direct bearing on the cost of finance for businesses, individuals and governments alike in periphery countries. Put bluntly, the periphery countries are experiencing a credit crunch - the cost of debt is very high relative to real incomes. The ECB claims that it can do nothing more to ease this situation."

The rest of this article can be read here.
central banks Eurozone labour