By Frances Coppola - October 15, 2012
Over the last few days, there has been a great debate in the economics blogosphere over whether public debt is or is not a burden on future generations. The idea that high public debt is a burden on the as-yet-unborn is a popular theme with right-wing politicians and is used to justify deficit-cutting measures that may be counterproductive. So this was a really important debate and I have been watching it with great interest.

- those (Baker, Krugman) who argue that as the debt transferred down the generations is owned by members of those generations, paying that debt off through higher taxation simply moves money around among people already alive: future generations inherit both the debt and its repayment, so the net effect in aggregate is zero and there is no overall burden on future generations

I am not going to debate any of this myself.  I'm firmly on the fence with Delong, Smith and Wren-Lewis. For what it's worth, I think whether or not public debt proves to be a burden on future generations depends on the actions of politicians, not economists. 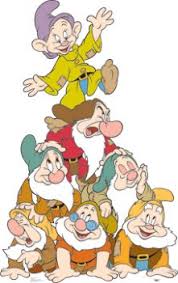 However, the purpose of this post is to share my amusement at the surreal nature of this debate with my readers.


Enter the Seven Dwarfs Economists, each with their own ideas about what to do with Snow White The Debt Burden.


Here they are, with their respective straplines (well, my interpretation of them, anyway).

I feel we could submit this debate to the public vote, X-factor style. Vote for your favourite by number in the comments!