Rochester High Street. The shop that has become UKIP's campaign HQ is (appropriately) on the far right-hand side. Photo: Mabbs

This is not my usual sort of post. It is overtly political, completely biased and very angry. I can no longer simply comment dispassionately upon dysfunctional UK political parties and rapacious sensation-seeking media. They have come to my home town and are intent on destroying it.

The decision by UKIP to set up their campaign in a quaint building on Rochester High Street was calculated to attract the maximum media attention. Surrounded by Dickensian shops and olde-worlde buildings, and within walking distance of a picturesque ruined castle and a lovely Norman cathedral, it was photographers' heaven. And the BBC fell for it. Every report so far on the Rochester & Strood by-election campaign has used either Rochester High Street or Rochester Castle as a backdrop. Well, the Castle is beautiful: The result is that the media are giving the impression that Rochester & Strood is a an affluent upper-middle-class area similar to Windsor. And indeed, central Rochester, with its big houses, its expensive restaurants and its private schools, is exactly that. But the rest of the Rochester & Strood constituency is very different. Strood, on the other side of the Medway, is far poorer, as is evident from these pictures of Strood that I took today. 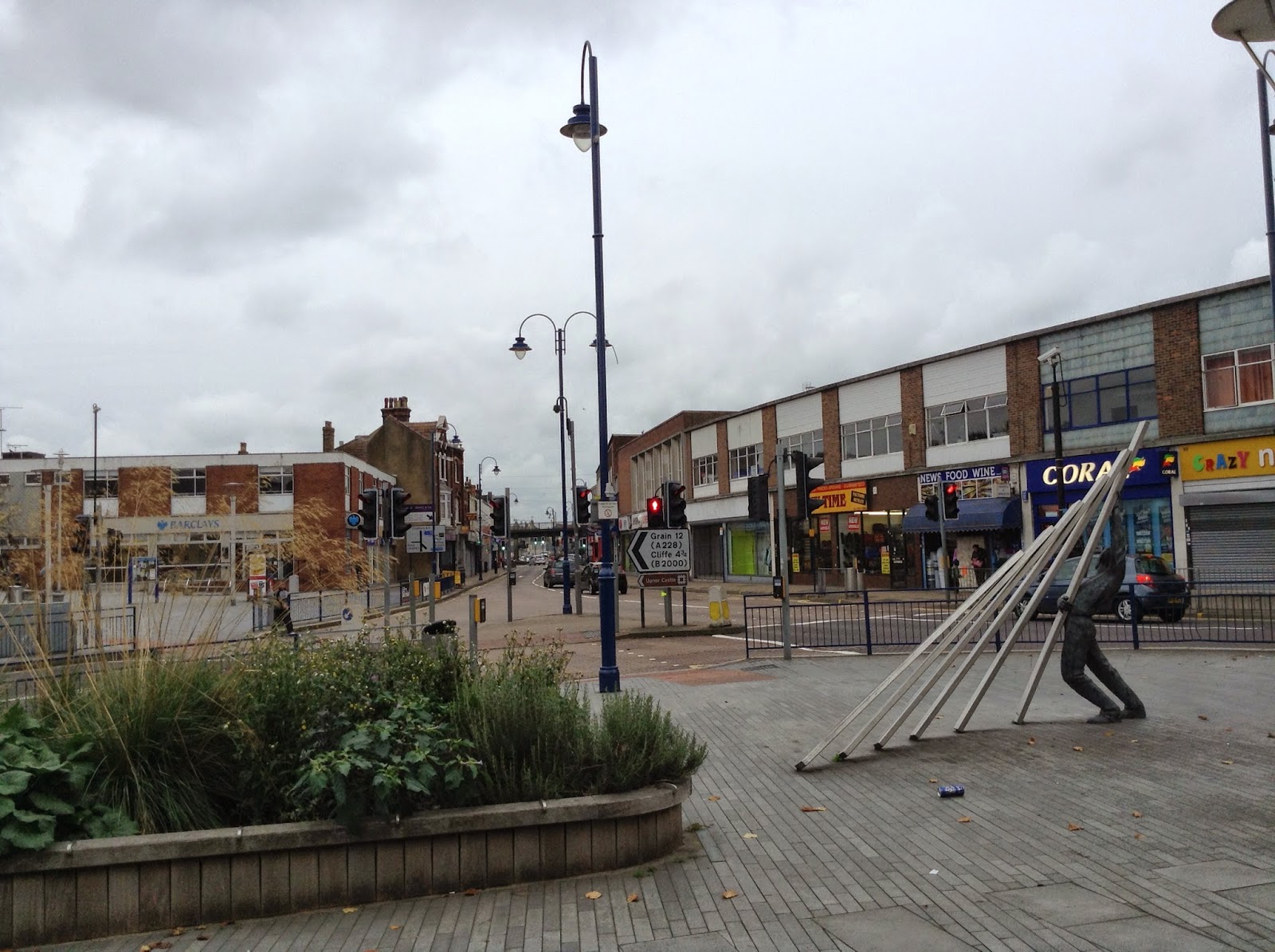 This picture is looking towards Rochester Bridge from Angel Corner. If you are wondering why "Angel", it is because there used to be a pub on the corner called the Angel. It is now an estate agent. 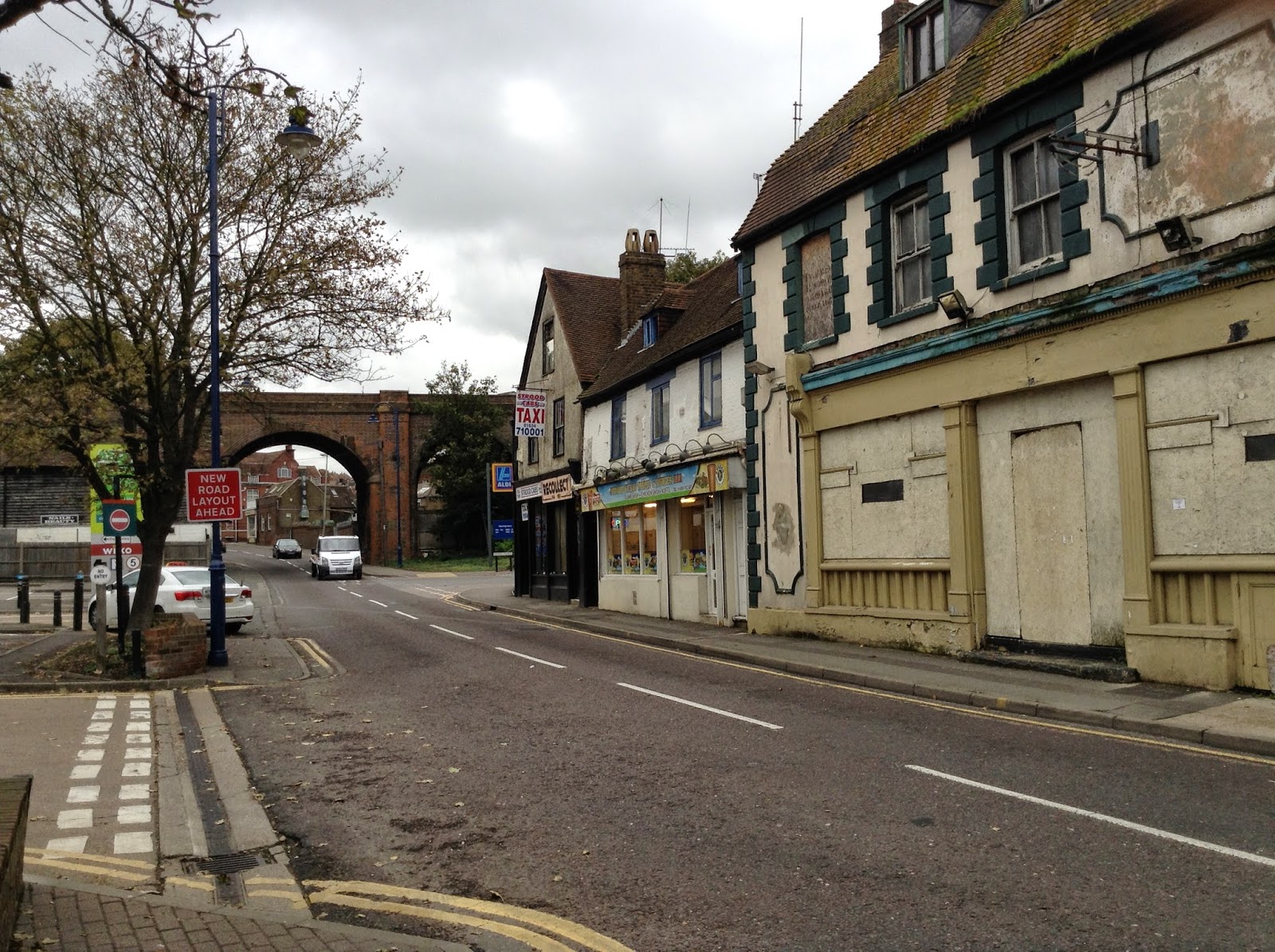 This picture is looking from Angel Corner east towards Frindsbury. On the right is the entrance to the new Aldi superstore. On the left is the entrance to Asda's car park. A quarter of a mile away is the largest Morrison's superstore in the South East, plus a sizeable Tesco. On the high street is an Iceland and a Wilkinson. Strood is, to be frank, Supermarket City.  Or Closed Pub City. Yes, that is a closed pub - one of many in this area. Supermarkets selling cheap booze have crowded out pubs.

You can't see them in these photographs, but Strood also has a very good Asian supermarket, several Asian restaurants of various kinds and a lovely sari shop. It is, you see, ethnically diverse. I wonder if Mr Farage knows this? 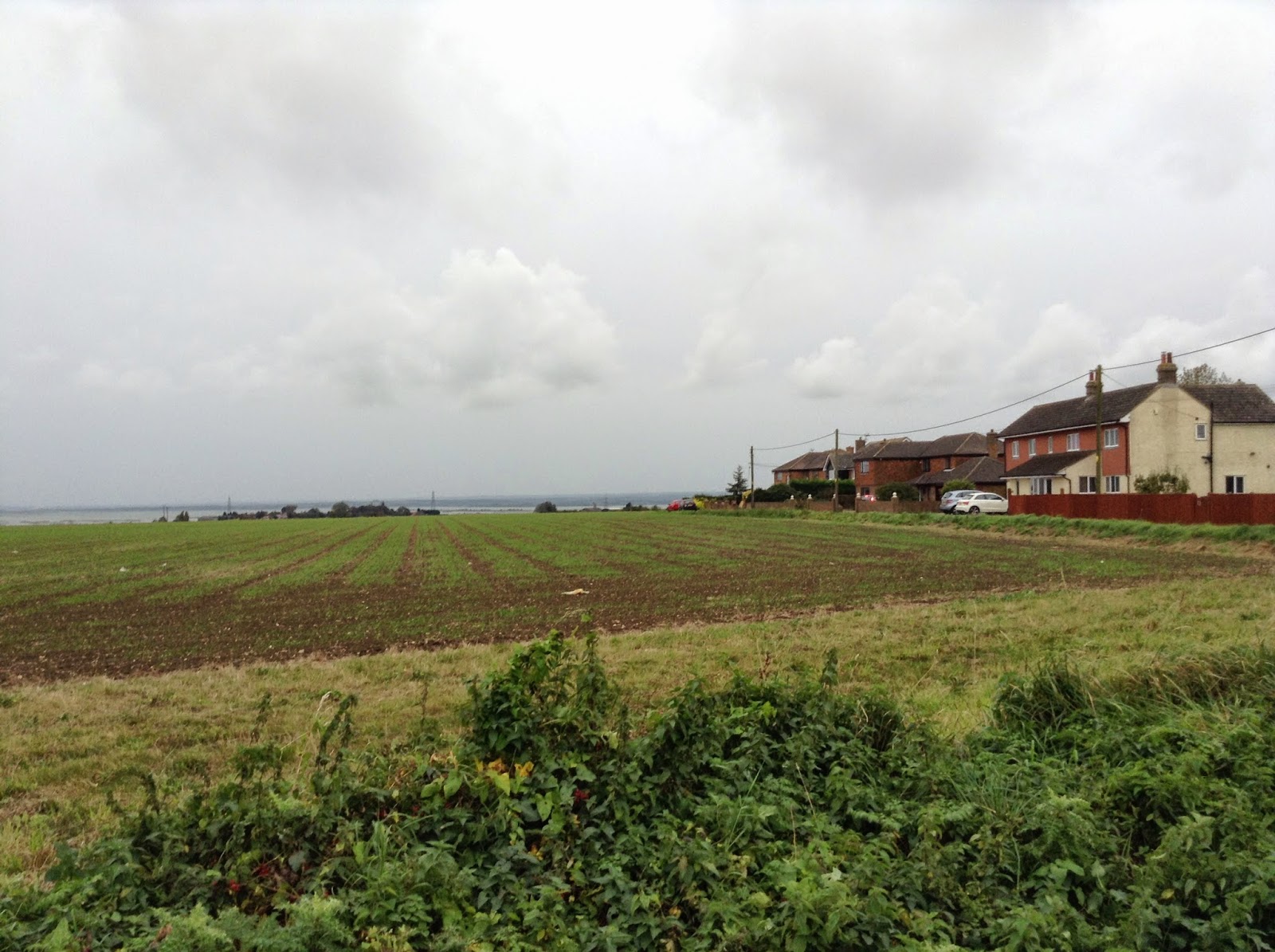 The villages are very different from the towns. Here's the centre of Hoo St. Werbergh, one of the larger villages: 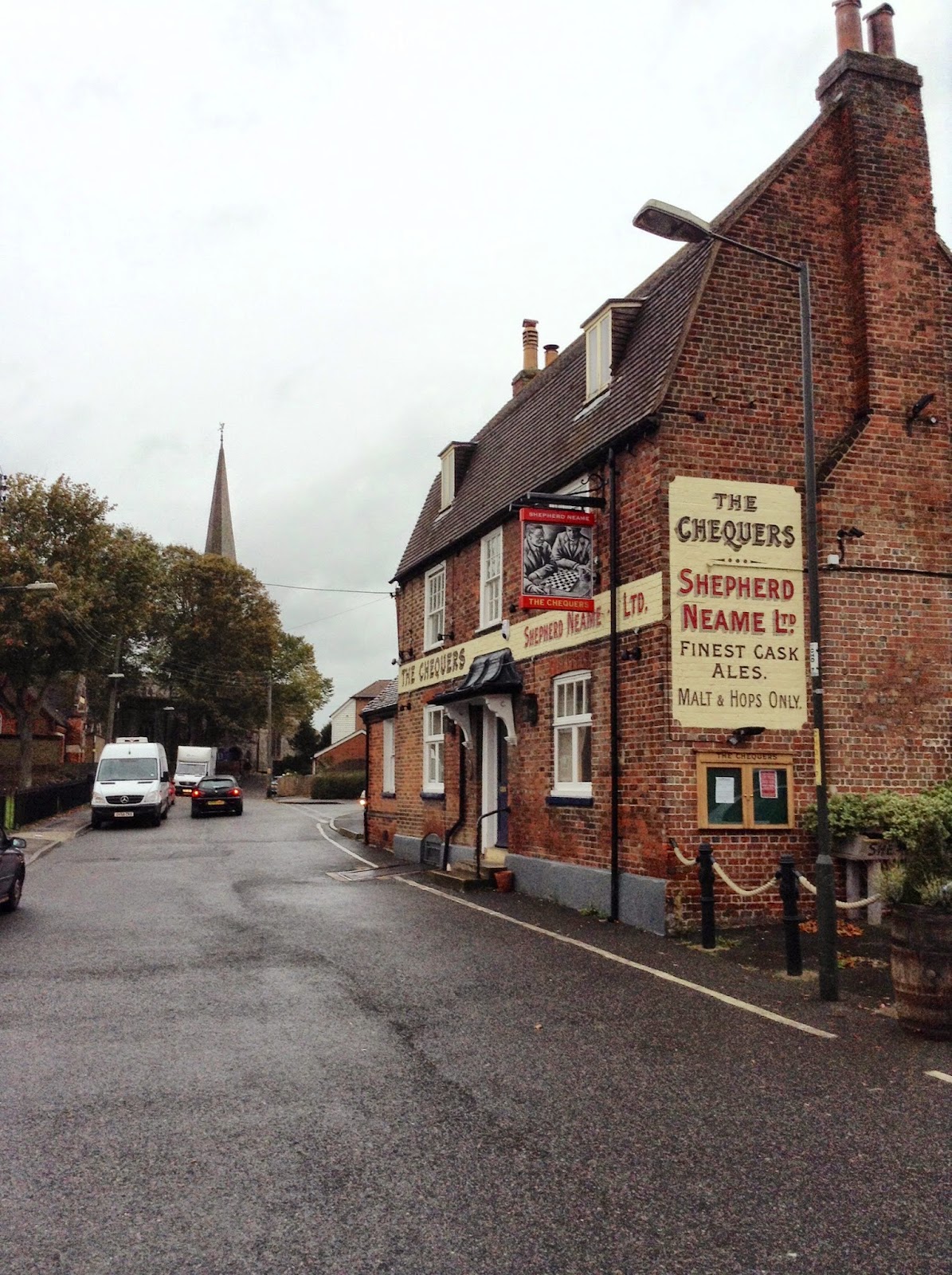 And this is the little village of All Hallows, that would have disappeared under one of the runways of either the Cliffe or the Grain airport proposals: 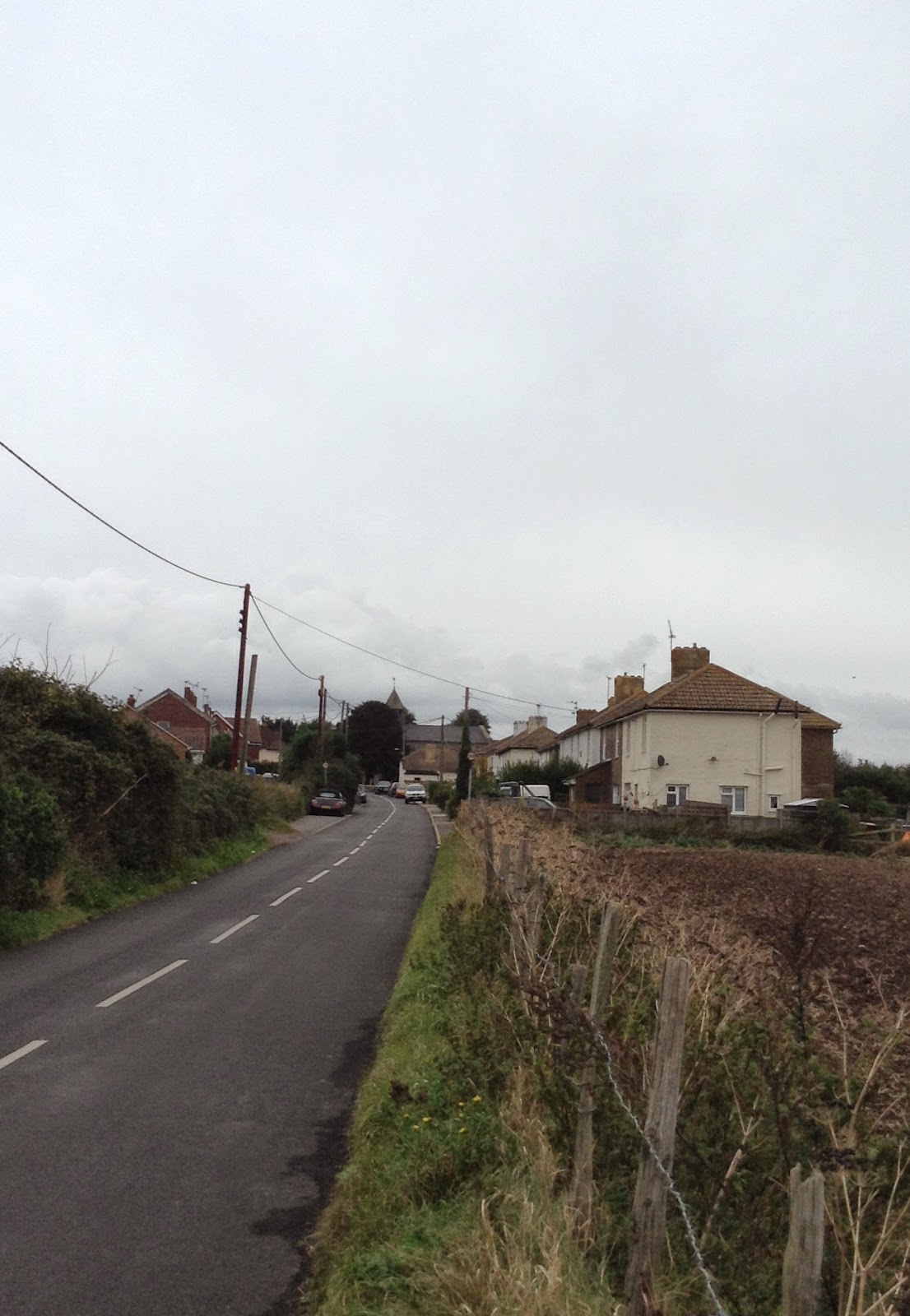 You can just about see the weather vane on top of the little church. Some of these village churches have been converted into dwellings, like this one at St. Mary Hoo, just visible in the distance across the farmland in this picture: 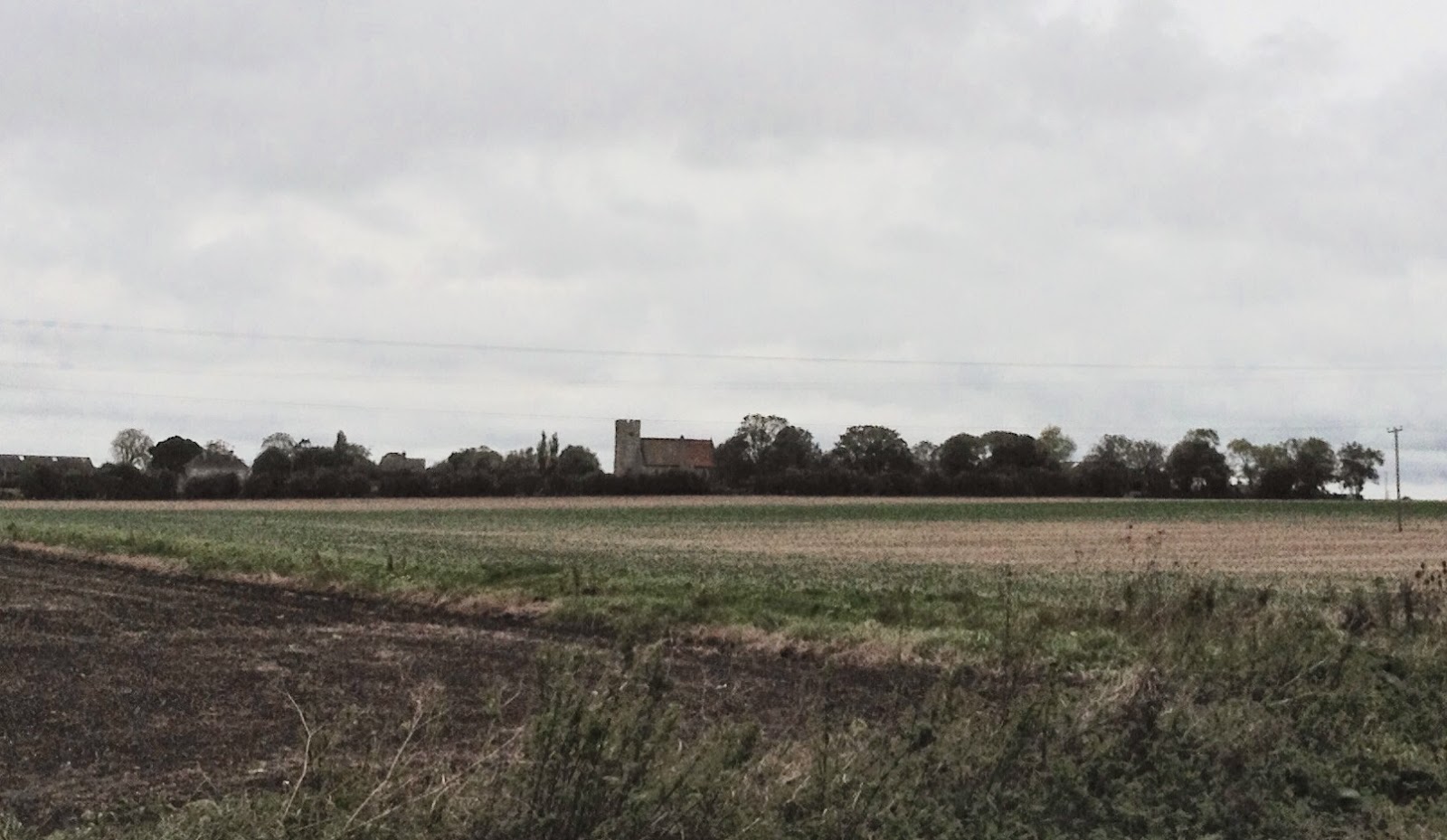 Village churches aren't all Church of England, either. This, in Lower Stoke, is a Methodist chapel: 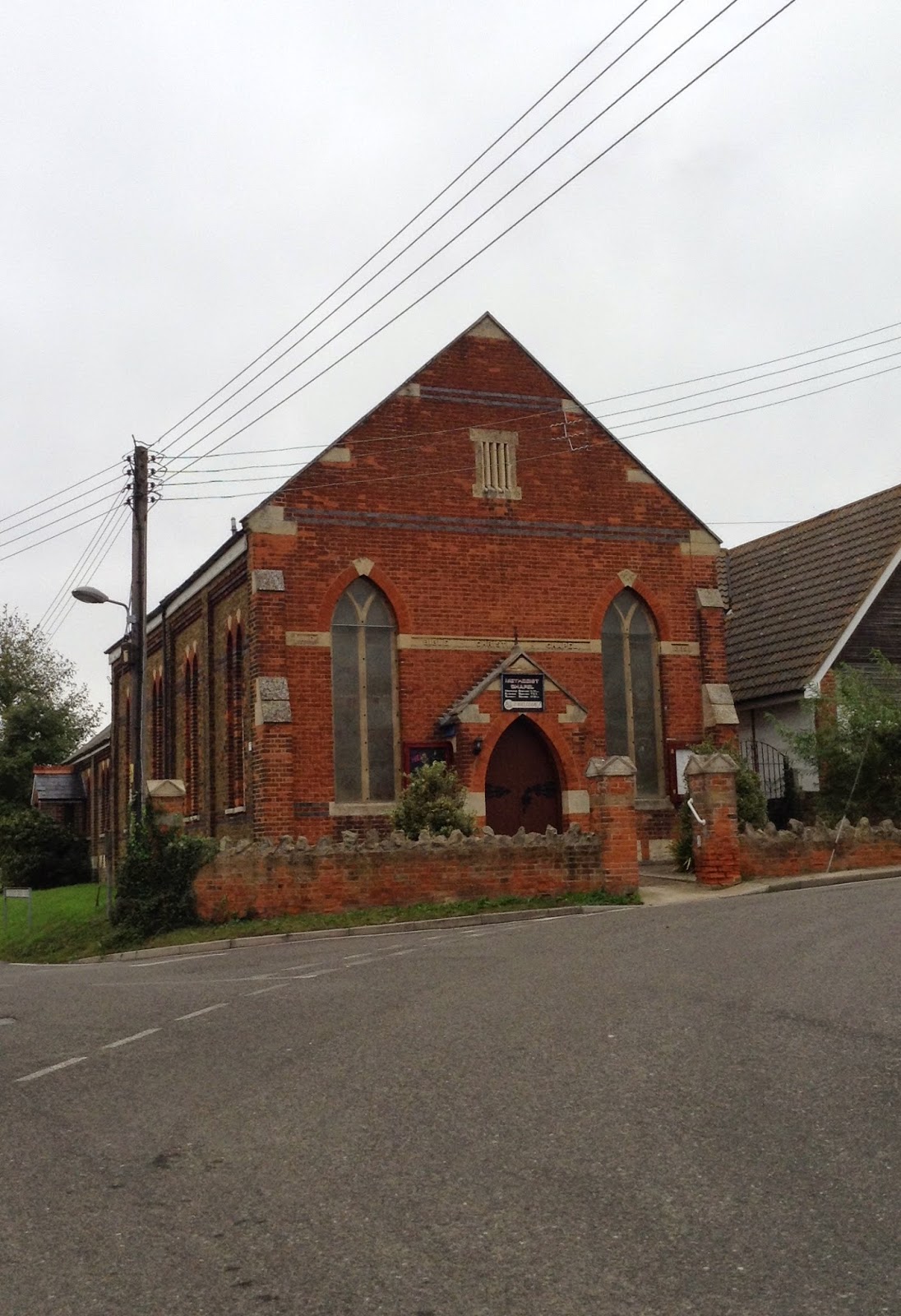 Nonconformist chapels can also be found in Strood and Frindsbury.

But although the area is very rural, it has an industrial dimension. This is the Isle of Grain: 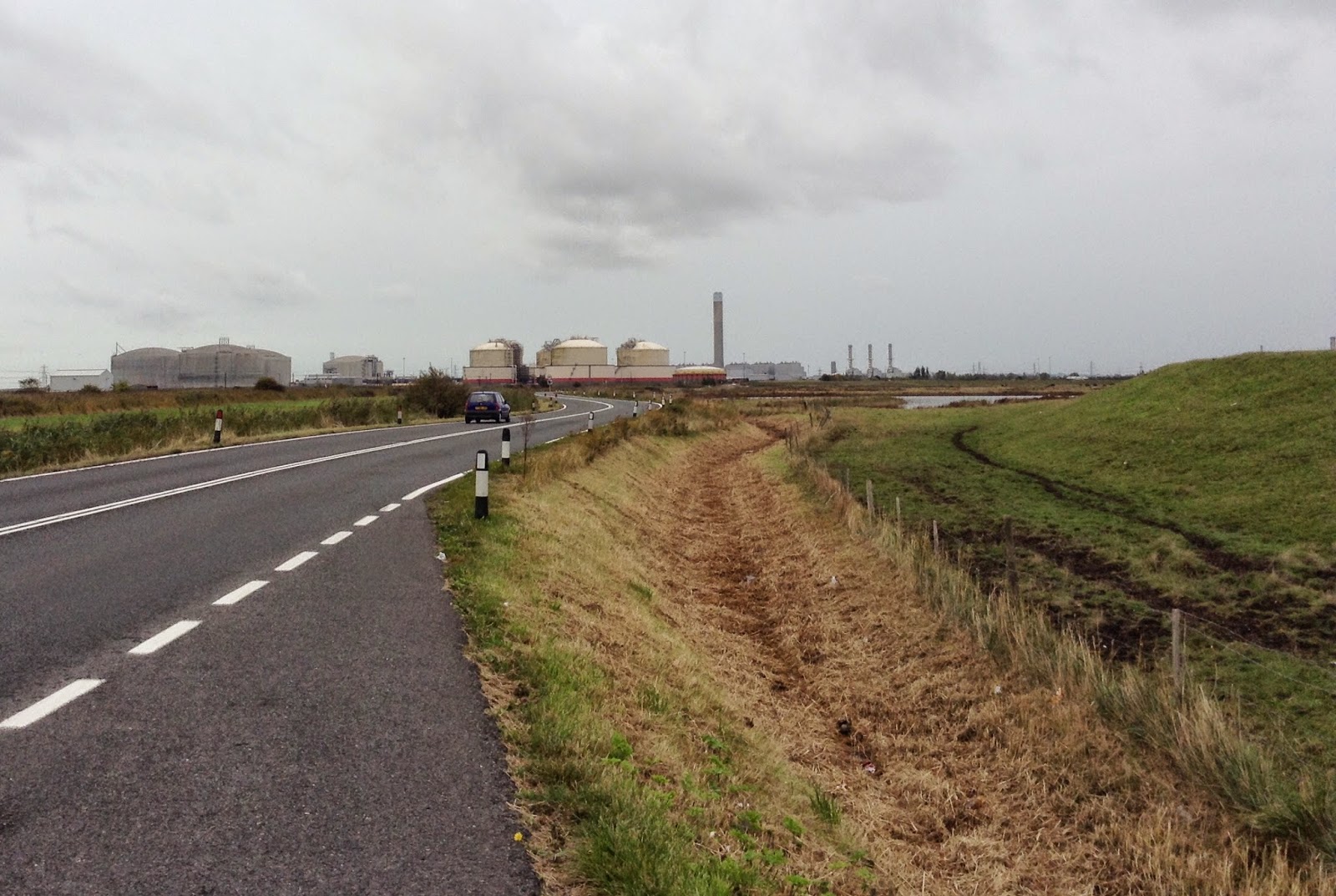 More oil and gas than grain production these days. And the surrounding area is marshland. The northern tips of the Isle of Grain and the Hoo peninsula border the Thames estuary and are home  to thousands of wading birds. There are several nature reserves and bird sanctuaries in this area. How anyone ever thought building a major airport here was a good idea is beyond me. Birds are fatal to jet engines. 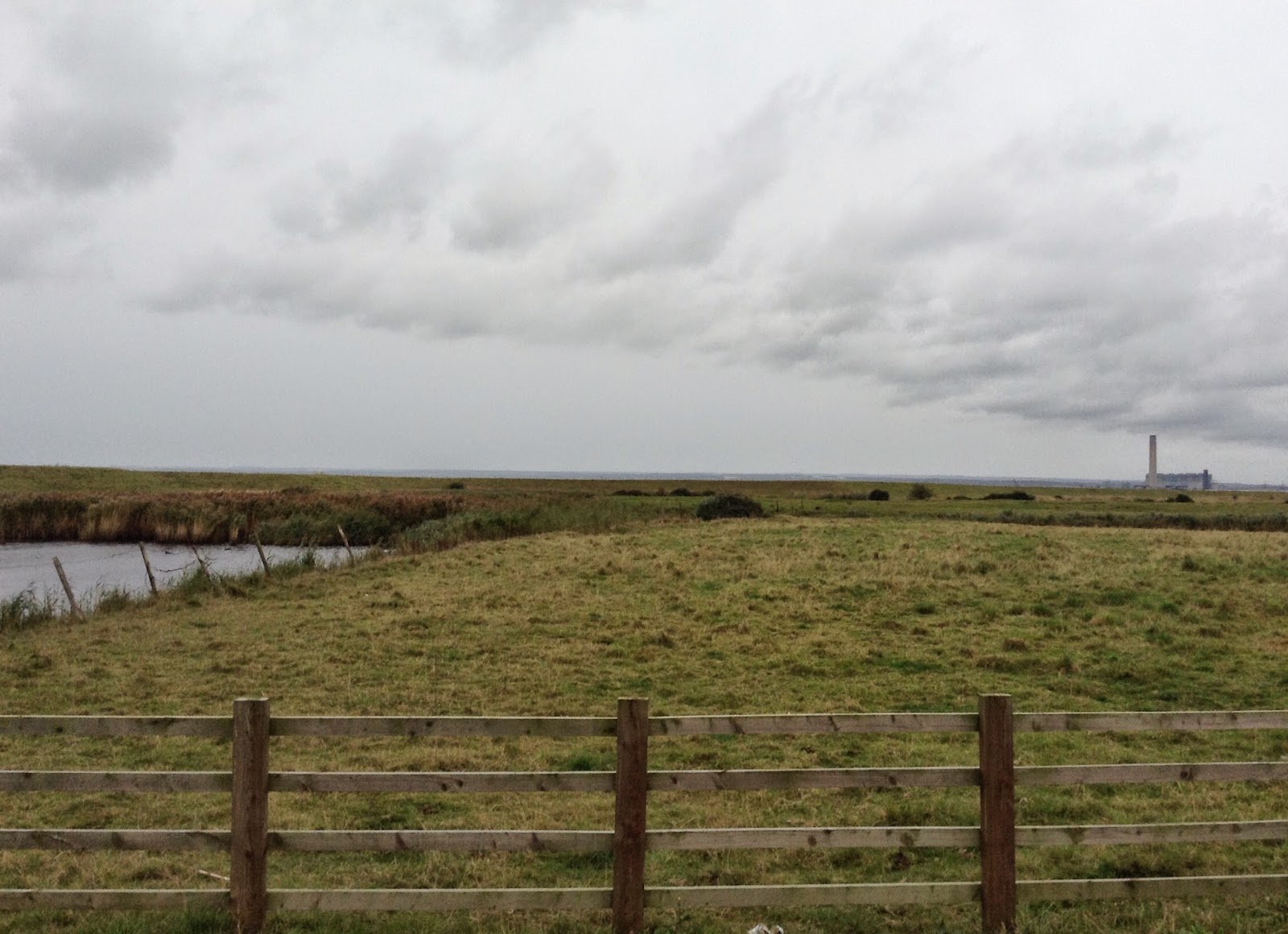 Kingsnorth was a dirty coal-fired power station which was closed down in 2012 and is now being demolished. Nigel Farage complained today that it was closed down "by EU edict". Indeed it was. But he only tells part of the story. Plans by Kingsnorth's owners E.ON to extend it met with opposition from environmental campaigners, wildlife campaigners and even from Christian Aid and the World Development Movement. It was environmentally unsound. The Hoo peninsula may need jobs, but not that badly. Anyway, where were Mr. Farage's objections when first the Cliffe then the Grain airport proposals were ruled out, at least partly on environmental grounds? They would have brought far more jobs to the area - but the EU was not involved in the decision. Hmm. Special pleading by Mr. Farage, it seems.

If he really wants to complain about something, he could do worse than complain about the behaviour of the Army. This is the former Army village of Chattenden: 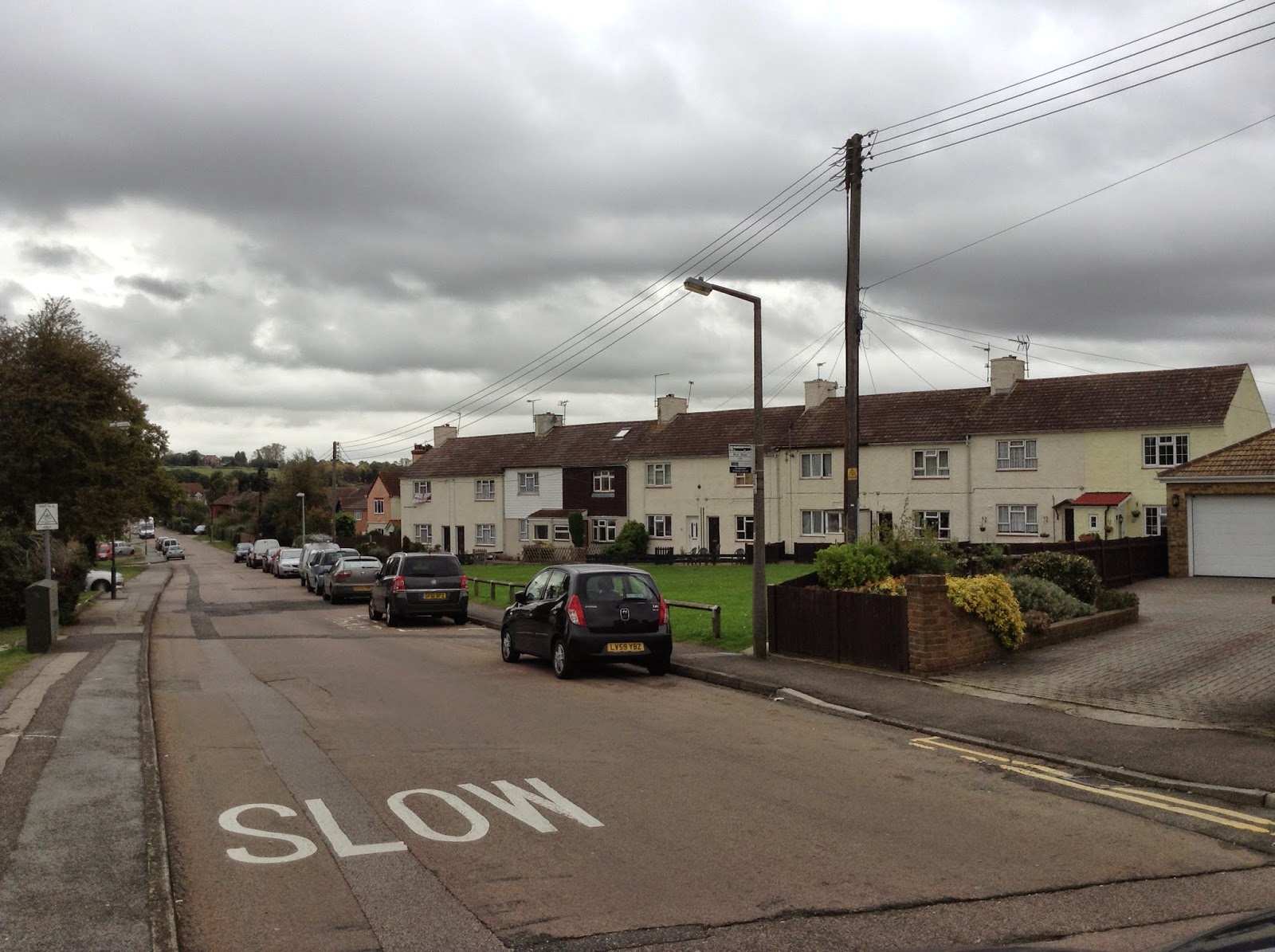 And this is what the Army left behind: 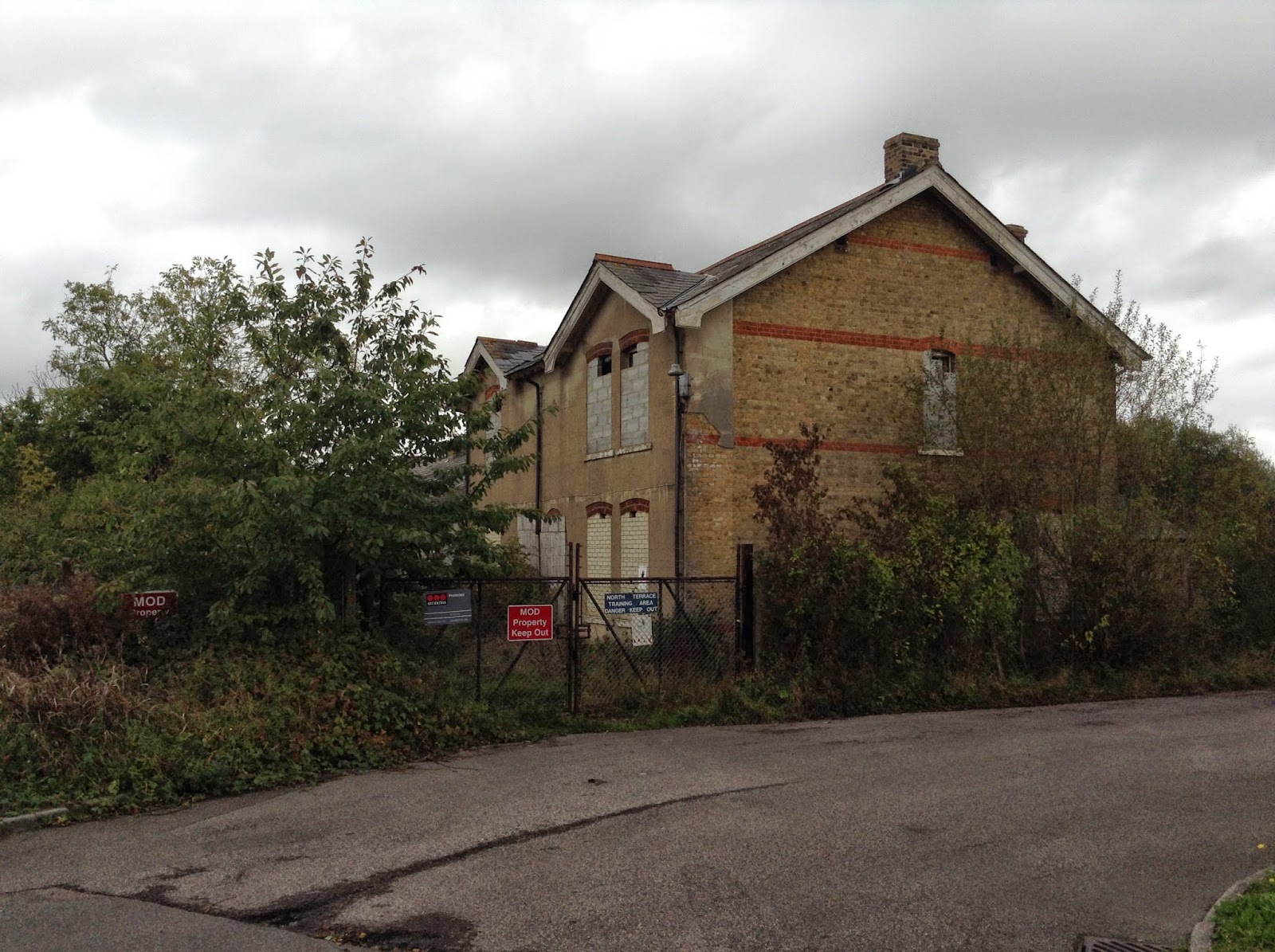 They also left this - the Lodge Hill Camp. It is part of a large area of former Defence estates enveloping Chattenden. The whole area is earmarked for 5000 dwellings, which will engulf and swamp Chattenden - a massive distortion to a tiny village in a very rural area. It amounts to a new town on the Hoo Peninsula. This is possible because 1) the area is not greenbelt 2) as these are ex-Defence lands they are brownfield, not greenfield. 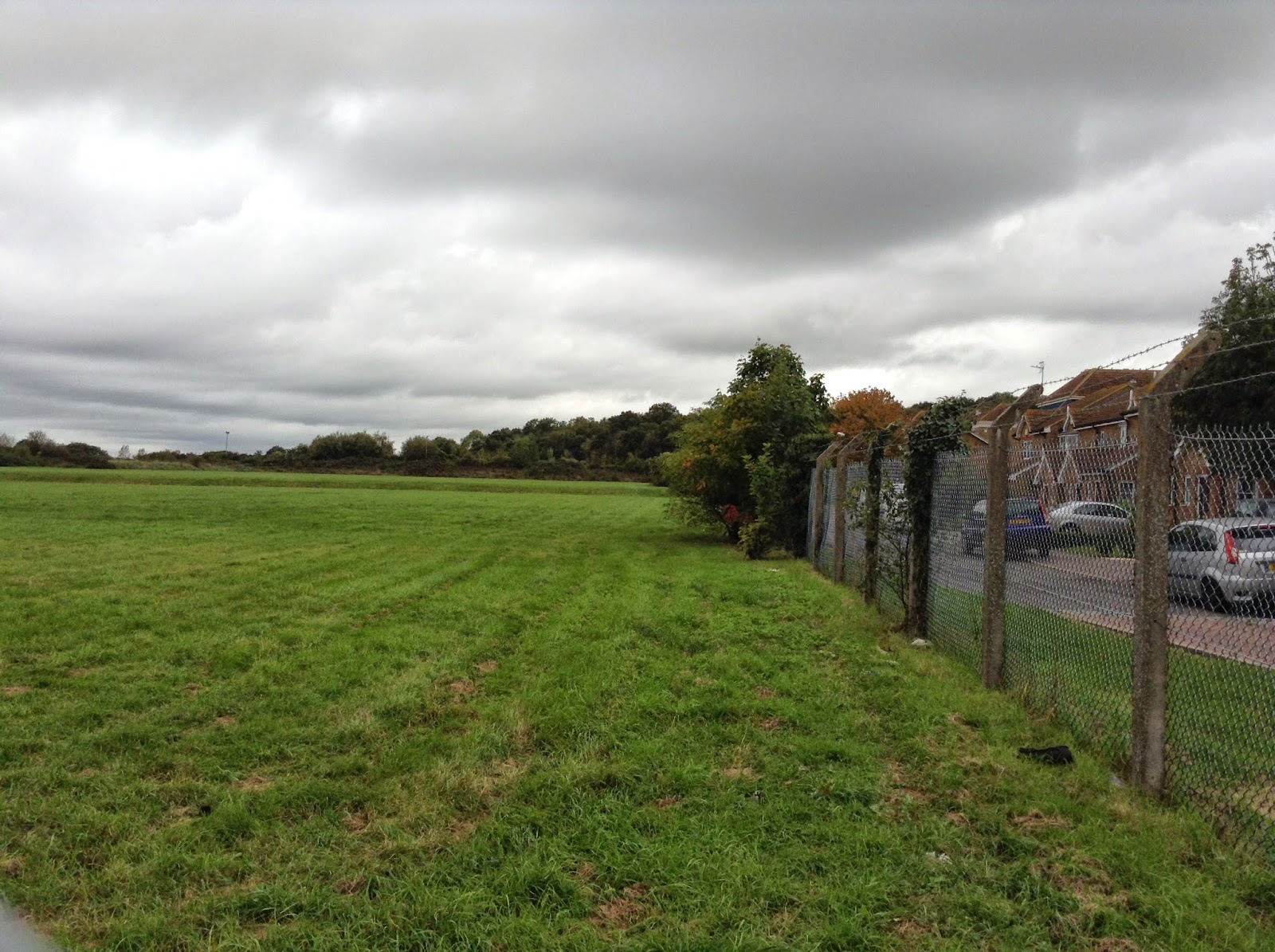 I suspect the reason why this area is scheduled for so many dwellings is the fact that it is within easy commuting reach of London (since HS1 now goes through Strood station, cutting the journey time to London to 35 minutes from over an hour) AND is not greenbelt. Just about everywhere else that is both undeveloped and less than an hour from London is greenbelt. It's obvious, really. Just cover the entire Strood area and most of the Hoo Peninsula with houses. Instantly relieve London housing pressure without encroaching on greenbelt. Now the airport proposal has been dropped (again), there is no further obstacle to this - is there?

Well, there is. The same people who opposed the Grain and Cliffe airports and the extension of Kingsnorth also oppose carpet housebuilding. The Lodge Hill development, in particular, encompasses several environmentally sensitive areas. I would argue that its rural nature is also socially important, at least to the people who live there. Do they really want this turned into another commuter suburb of London?

And I challenge the media, too. This by-election is not about UKIP versus the Conservatives. It is about the people of Rochester & Strood. It is about our lives and our future. Do some proper journalism, for goodness sake, rather than feeding UKIP the publicity they crave. Find out what this place is really like. Talk to real people, not just the well-heeled folk of Rochester but the Asian community of Strood, the small businesspeople, the farmers out in the rural areas. Find out what people are really concerned about - and talk about that, not about Nigel Farage's hopes of world domination or David Cameron's worries about re-election. They don't matter. We do.