By Frances Coppola - October 21, 2012
This is a fascinating chart from the Office of Budget Responsibility's Forecast Evaluation Report for October 2012: 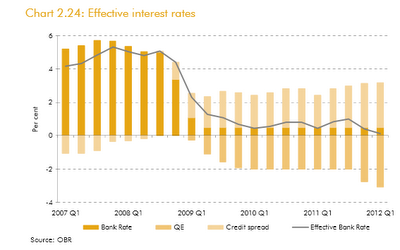 Like all charts, it tells a story. And the story it tells raises serious questions about the conduct of monetary policy and the behaviour of banks.

Before the financial crisis, the weighted average interest rate across all lending and borrowing was slightly below the policy rate set by the Bank of England, and the credit spread was downwards into negative territory. In other words, commercial interest rates for both savers and borrowers were generally lower than the policy rate. The result, as we now know, was a credit bubble and inflation in asset prices, as people and businesses were tempted by low rates to take on debt for asset purchase, particularly property.

This chart contradicts the suggestion that some have made that the bubble was caused by the Bank of England's policy rate being too low. In fact the rate was at the top of the credit spread and higher than the effective rate, so most commercial interest rates were already lower. Would raising it have forced up commercial interest rates? Probably, but the rise would have had to have been an awful lot to get lending rates off the floor. We have not seen a policy rate of 15% since the early 1990s, but that is I think the sort of level that would have been required to prick the lending bubble. But prior to the financial crisis the BoE was targeting CPI inflation, not asset price inflation. The CPI inflation rate at the time was 2-3%. Raising the policy rate to the amount required to prick the lending bubble would have pushed this right down and probably caused a technical recession. More worryingly, it would have precipitated the sort of housing market collapse and banking meltdown seen in the US. The UK only suffered from the backlash of the US's housing market collapse - it did not really experience one of its own making. But had the Bank of England pushed up rates to prick the asset bubble, I think things might have been very different: there would have been a large number of mortgage defaults, because our variable mortgage rates leave most people vulnerable to rate rises, and the Government would consequently have had to bail out a much larger number of banks.

But look what has happened since. The policy rate has fallen to an all-time low - it has now been fixed at 0.5% since Q2 2009. But that is only just beginning to feed through into the effective interest rate, and the chart indicates that most commercial lending rates remain far above the policy rate. Now, the policy rate is not an absolute indication of the cost of funding for banks - most banks pay slightly above that - but it is certainly an indication that bank funding is pretty cheap at present. Yet commercial borrowers are still paying high rates. This is undoubtedly because of banks' desperate need to repair their balance sheets and build up capital, but it doesn't help the economy.

And note also the effect of QE. This chart does suggest - very strongly - that QE is effective in bringing down real interest rates - but not for borrowers from commercial banks. They are paying as much or more than two years ago. The effective interest rate is depressed because of lower rates paid to savers, not lower rates charged to borrowers. Credit spreads are widening.

This suggests that QE, far from being a stimulus, is actually contractionary for the real economy. If rates to both savers AND borrowers were falling, and bank lending volumes were normal, then QE could be said to be a stimulus, because it would encourage more borrowing, and falling returns to savers might encourage them to spend rather than save. But that's not the case. Lending volumes are reduced and interest rates to borrowers remain high, while interest rates to savers are depressed: people on fixed incomes are spending less, not more, because their income is reduced, and borrowers faced with high interest rates are choosing to cut spending in order to maintain debt repayments. The overall effect is to take money from the real economy and transfer it to banks, who use it to shore up their damaged balance sheets. This raises questions about exactly what QE is supposed to stimulate and who it is supposed to help. What it is doing is reducing banks' funding costs and increasing their spreads. How that helps the cash-strapped people and businesses on whom the UK's economic recovery actually depends is a complete mystery to me.

I have argued before that QE is pretty useless as a demand stimulus in the real economy. I am now wondering whether the effect is more toxic than that, and QE may in fact be contributing to our economic stagnation. In which case we should stop it NOW, and if that means banks fail, let them fail. Draining money from the real economy to prop up zombie banks is the policy of stagnation and decline, not recovery.